Made me Think, Caught my Eye.

During lockdown,  I  kept wishing I'd done things and gone places when I could.  Now I'm doing my best to do just that.  Not always successfully, I might say -  but I am trying.  And last week, we were in the valley of the River Wye in Herefordshire, towards the Welsh border.

We were outside as much we could, walking, cycling (on the flatter bits of this hilly countryside) and in particular, exploring old parish churches, which are far more than just places of worship.  You do find good ones all over England, but Herefordshire's ones seemed particularly interesting.

Now I apologise if you are one of those people who find memorials and old churches uninteresting or creepy, because I want to write about some of them in this post. To me the things I see there hold so much of the humanity, the thoughts, beliefs, hopes and fears of people past and present.  Even something very old can have glimpses of this and bring the past to life in a way that nothing else quite does.

Partly, this is because many of the things you see in churches are full of mysteries. So much in the old days was never written down or has been lost, but we do know people went to the trouble of making (and paying to have made) all kinds of things which puzzle us now and give some food for thought..

Soooo........ here's an aimless selection of things that either made me think, or else caught my eye in various Herefordshire churches. 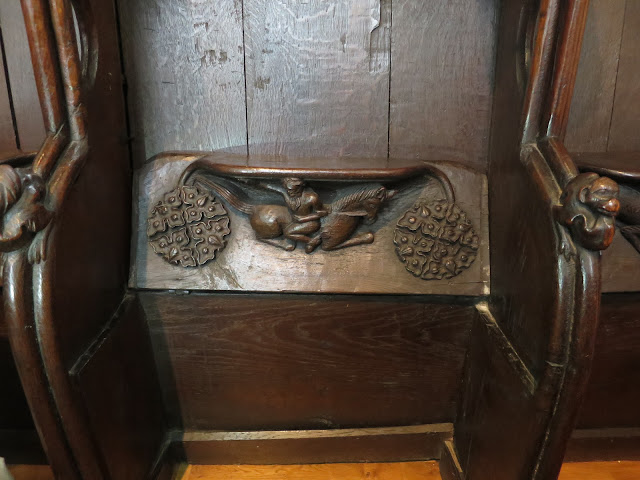 Here is a 14th century carving hidden under a tip-up choirstall seat, known as a misericord. It shows a man riding back to front on a galloping horse, its tail streaming in the wind.  Until about 200 years ago, riding a donkey back to front was a sign of humiliation. But this isn't a donkey, it's clearly a horse, I think.  Misericords usually show irreverent or mischievous scenes, as they are hidden and also sat upon, so rather secret.  Maybe this back to front fellow was just a fool who got everything wrong, maybe he symbolised some kind of a sin, maybe he was a popular character who never came down to us in history. But whoever he was, he would have meant something to the people who made it and secretly saw it. 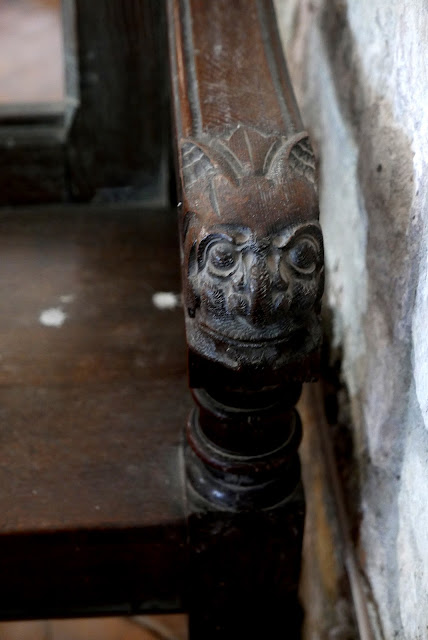 And who is this smiling horned figure, boldly staring from an old arm rest?  For centuries, people have rested their arms on his head, yet nobody now knows who he is. To me he looks a cheerful character, but the horns suggest otherwise, as they usually symbolise the Devil or one of his imps. The mouth appears to be surrounded by fur, like a animal's.  His face has not been hacked or sawn roughly off the seat, as was done to most depictions of sacred figures in English churches by anti-idolatry and anti-Popish zealots in the 17th century and before.  This fellow was left well alone,  so I think he might be an imp, or a pagan fairy, now forced to listen to every single sermon in that church till the end of time.
Below is a picture of a most wonderful font dating from the early 12th century. In those days churches were full of wall paintings and decorations so the illiterate congregations could learn stories about good and evil.  Almost every surface was covered in images, and nearly all of them were destroyed by the zealots.
. 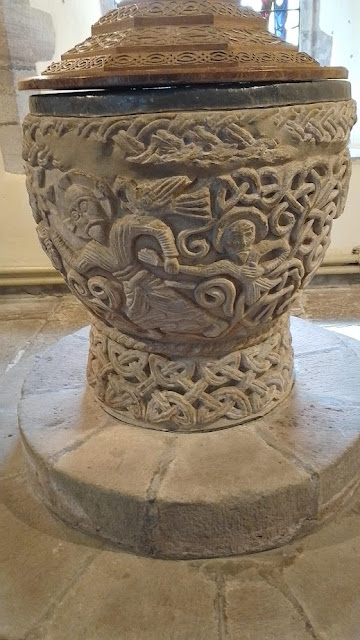 I wonder how this font survived. It might have been buried, as sometimes happened, when the zealots were near. A few yards away a very plain looking very old stone bowl sits under a chair. I suspect that was the font that was used during zealot alerts, nothing to see there to annoy them.
Nobody knows what this wonderful font really depicts. Some say it is the Harrowing of Hell, showing the rescue of one of the good people who existed before Jesus, who all had to go to Hell of course, since they did not know Him. And, so the guidebooks say,  it shows Jesus (with dove on shoulder)..... 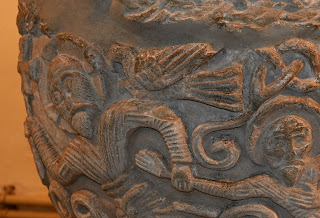 rescuing Adam with the help of God the Father.....here seen with a halo and carrying a tablet which must hold the Ten Commandments..... 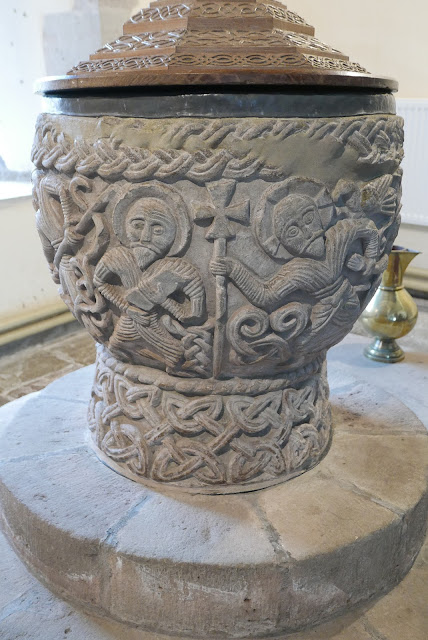 Although of course Moses, not God, is usually the one shown with the Ten Commandments, I've not seen God with them before.  But Moses doesn't have a halo.  Other guide books say that this isn't the Harrowing of Hell at all, it is a man being helped to escape not from Hell but from an evil lion, seen on the back of the font swishing his tail.  (below)

And nobody seems awfully clear why two men are fighting each other on another bit of the font. 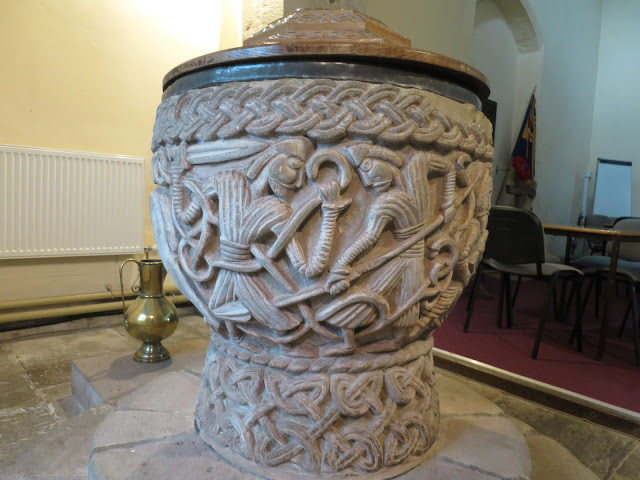 In another church, I peeped into the vestry and spotted a large piece of some obviously very old panelling, I am no expert, but I would date it from the late 16th or early 17th century.  It was probably given to the church centuries ago when an old manor house was replaced with a new one, as panelling provides insulation and keeps out the damp, so it was a kindly gift and no doubt kept the vestry a bit more comfortable during the winter.
.
.    It was tall and impressive, but oh dear, someone had screwed a modern double spotlight into it.... 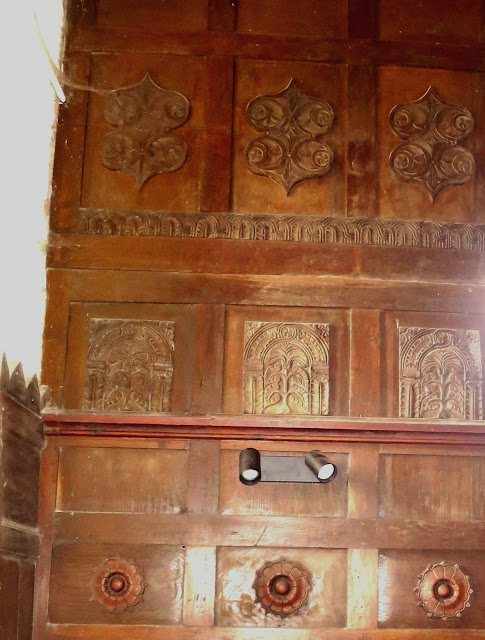 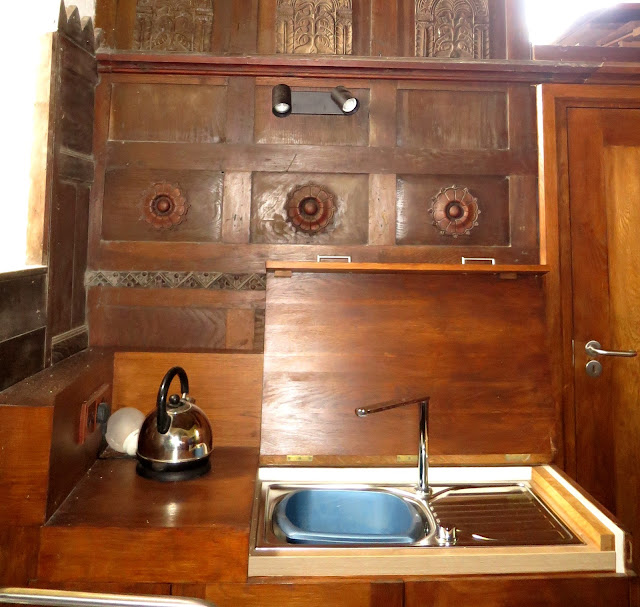 I couldn't help being a bit exasperated to see obviously very historic panelling treated like this,  but in a way that is part of why these old churches appeal to me. People have done what they think is needed over the centuries, so perhaps whoever does the washing up after the cups of tea stands and admires the quaint old carving. And at least it keeps out the cold.
Many churches have wonderful old stone monuments, but the one below is museum quality. This is absolutely not the work of some country stonemason in the village where it is to be found. Look at the carving of the clothes - and what's more you can see what these people actually looked like. He, Sir John Kyrle, is clearly a rather handsome man of middle years, but his wife is by no means a beauty, is she? I don't know what was considered beautiful in those days, but this does not flatter her.   Even though this pair died centuries ago, I can imagine meeting them very easily and I feel I would recognise them at once. 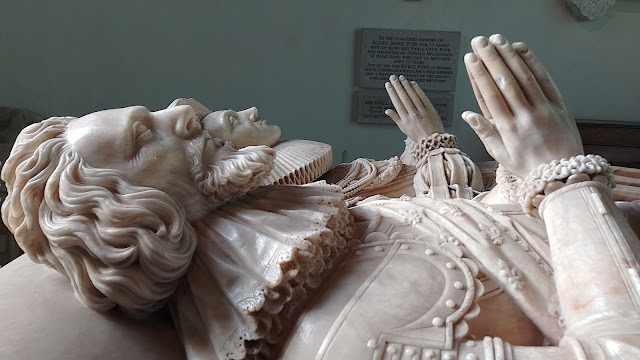 Much more rustic is this wooden figure of Walter Helyon, who died about 1360 AD.  He was a franklin and the steward to the local lord, so rather an unusual person to have such a big monument, even if it is only wood.     He is wearing an ordinary outfit, not a suit of armour, and over the years he has been pretty mistreated, and needed some restoration and repainting in the original colours.  His outfit is apparently an extremely accurate depiction of ordinary male dress at the time, a rather skimpy looking tunic buttoning down the front with lots of buttons, and not that comfortable looking, with his dagger and purse at his side. As you see he has his feet resting on the back of his dog, which customarily means he died at home and not in battle. 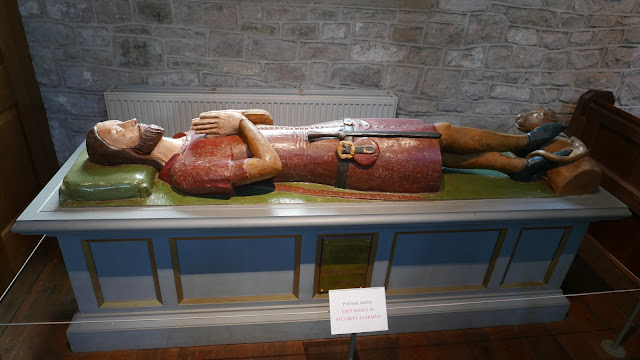 And I was really impressed by this ancient yew tree, which is said to be fifteen hundred years old - some people reckon it is even older.  Its old, heavy branches are held up by a framework of  mid Victorian iron pillars of a type often used to hold gas-lights,  and weighty lengths of oak. Not that elegant, but probably the best the parishioners could afford.   Inside the hollow trunk, someone has made a bench which you may be able to see if you look closely.   Most churchyards in England contain yew trees, which signify longevity, or, indeed immortality.  Sometimes there are avenues of yews.   This bench would be a good place to sit and ponder life. 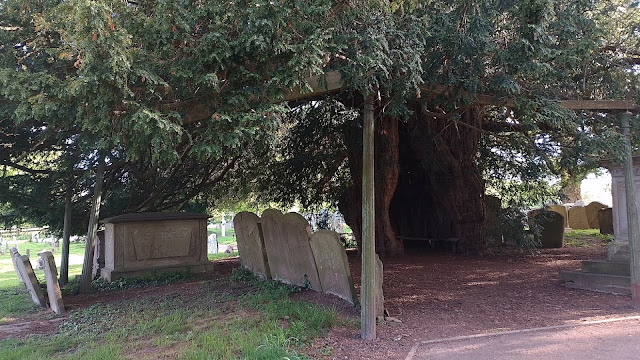 |I went and sat inside it and looked up - I could see right out of the top of the tree. 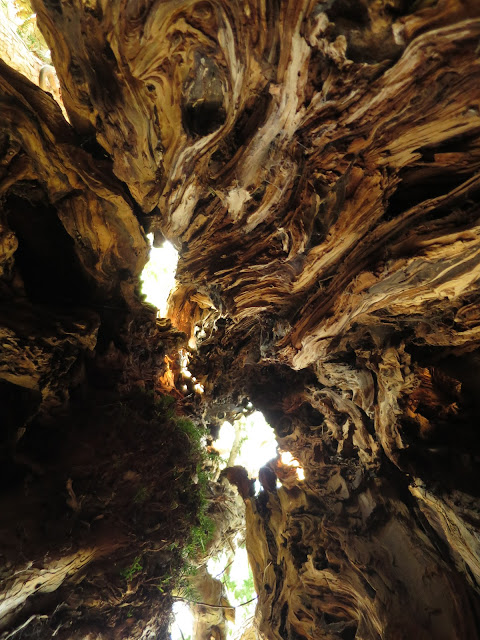 It re-ignited my childhood dream of living inside a hollow tree, it always seemed a really nice idea, and it certainly felt quite cosy with all that wood shutting out the noise.  I did not really want to leave it.
Finally, here is a Saxon doorway, dating from well over a thousand years ago, which we found behind an old curtain in a parish church.   The wooden door itself looks as if it must be newer than the old doorway, both in terms of its condition and its style - a very unusual style which I have not seen before but I don't think is Saxon.  But perhaps it is. The planks seem to have shrunk, unless they are intended to be that way, and plenty of money has been spent on the big, heavy, and very old lock.  It's a real puzzle.
As you see it is full of gaps, very draughty, which explains the curtain. Whatever its shortcomings as a door, it provides a good space for the parishioners who clean the church to keep their vacuum cleaner out  of everyone's way.    As it is locked,  nobody uses it to walk in and out of any more. 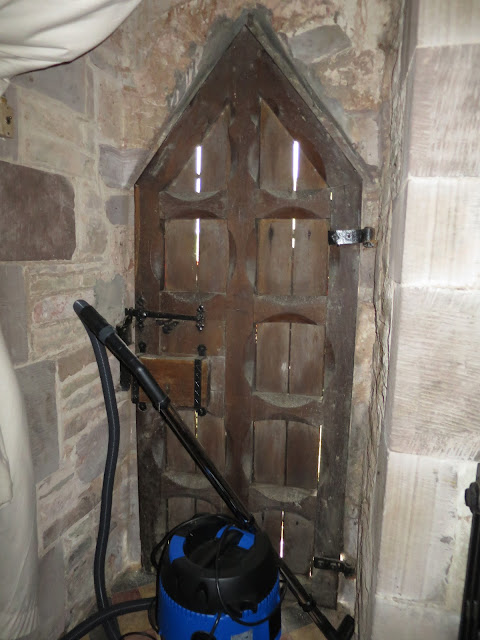 So there you are, some glimpses of the English parish church, always something unexpected to see. For me, getting to explore these places is one of the things I like the best about cycling, walking or driving about the countryside.
What do you always look out for, when you're touring aimlessly about in your part of the world?
Posted by Jenny Woolf at 23:16