Easter! And Some Mysterious Runes? 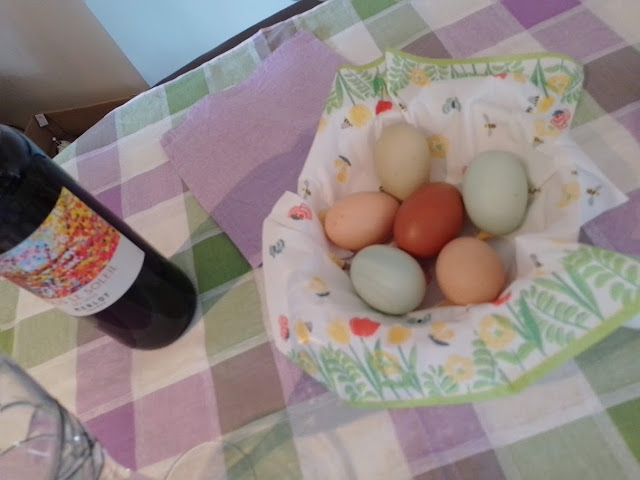 Happy Easter!  Well, belatedly.  I started this post on Good Friday, but life got in the way and now it's Easter Monday. So it's still officially Easter, I guess!
We began Easter week in Suffolk, and these beautiful eggs were a gift from Sara, owner of our Airbnb, who got them from her hens.  We have been enjoying the eggs, along with the Navettes de Marseille from K (see below) all weekend.     Sara keeps many kinds of different hens, but since the end of last year, they've all had to be locked inside because of an outbreak of avian flu. But they have spacious and varied sheltered living accommodation with a good view of the outside world, so they looked, and sounded, very happy.

Our own accommodation was an equally satisfactory one-storey building that had been a small dairy long ago. I suspect it had been a "granny annex" after that, and very charming it was, furnished in traditional style, with a crooked apple tree growing around the back door, with blossom just coming out and daffodils everywhere, including on the kitchen window sill. 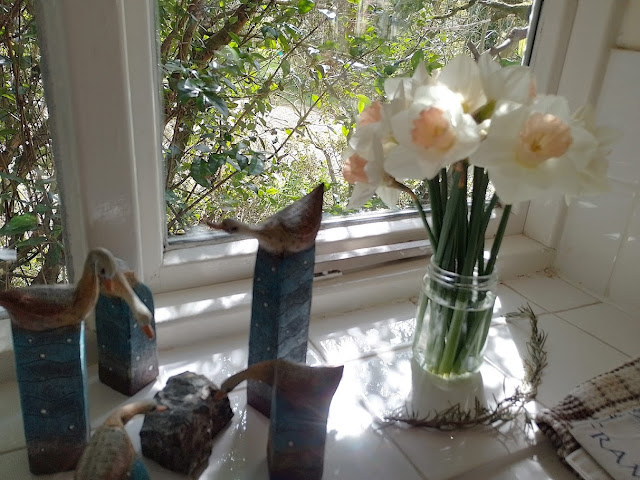 On our first day we awoke to the sound of birdsong and roaring engines.  A quick look out of the window showed this in the farmyard.... 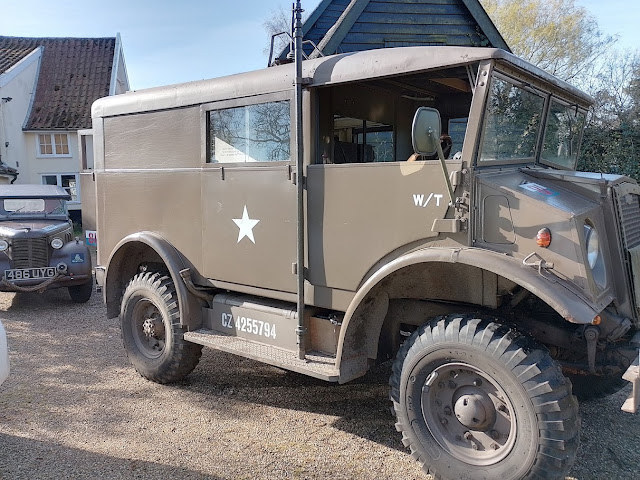 It's a Chevrolet wireless truck from WW2, in full working order, right down to the tin hat hanging on the table inside, and a pick and shovel on the back.  It's among a group of trucks made for Britain by Canada, after so much equipment was lost in the evacuation from France, so it has a right hand drive.  These wireless trucks were specialist vehicles with huge copper extending aerials to give them a wide radio range.
. 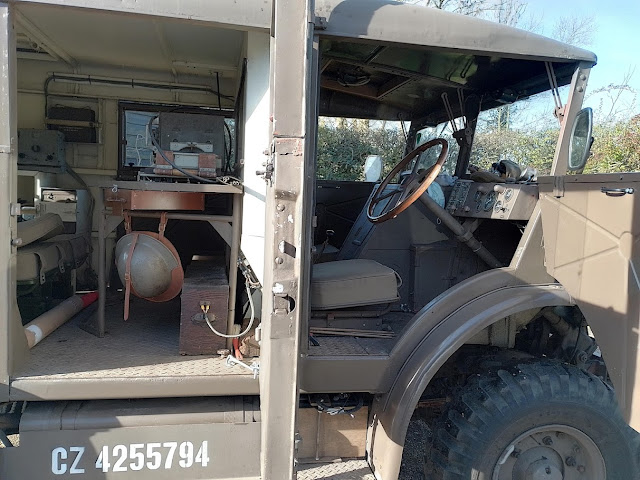 The equipment includes a "19 set" radio transmitter and receiver, a piece of kit often found in UK WW2 tanks.  This one has both Western and Cyrillic labelling so it might originally have been in one of the thousands of tanks that Britain sent to the USSR during WW2.
Right behind this arresting vehicle was a British Austin junior staff car, a far more modest little thing. Sara had already warned us that her husband was a military vehicles fan, and that he and a friend would be going out to an open day nearby.   One of them would be driving the truck, the other little car, which did not have the luxury of glass windows. Luckily, the weather was pleasant, so it must have been a nice ride. 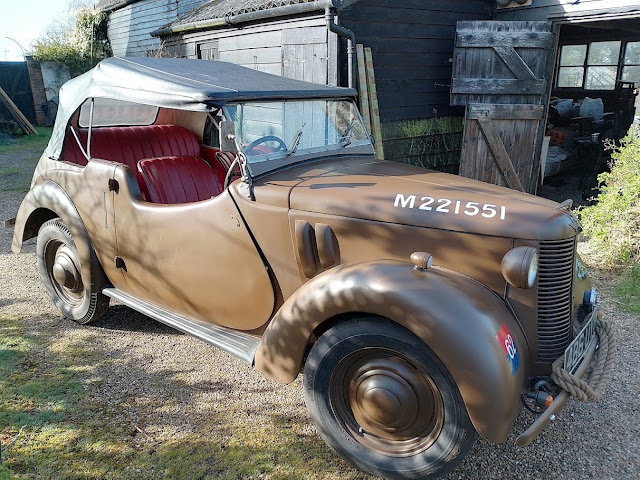 After the two of them chugged off for their day out, we set out too.  We planned a visit to the seaside. Hadn't seen the sea for ages, and also had not been to the little town of Walberswick for years, so that is where we decided to go.
Walberswick is in a corner of marshy land formed by the sea and the mouth of the River Blyth.  Across the Blyth is the pleasant and interesting seaside town of Southwold, which has a lighthouse, an excellent brewery (Adnams) and a wonderful quirky little pier.   When we first knew it, Southwold was a half forgotten gem of a seaside resort, but has now become a bit too busy for our taste, and anyway,  Walberswick still has a slightly cut off feeling, which we like. There is no pier, no lighthouse, no brewery in Walberswick, not to mention no beachfront shops and - well, there's nothing much, really, except sea, sand and pebbles, plus a collection of black-tarred weatherboarded huts, an attractive mix of houses, a couple of teas/gift shops and a lot of marshland and reed-beds.

We had the beach almost to ourselves, because, despite the bright sunshine, it was freezing.  I was really glad I'd bought windproof coat, scarf and gloves.  The people in the picture were going at quite a speed, more or less blown along by the wind, which comes straight from Russia. 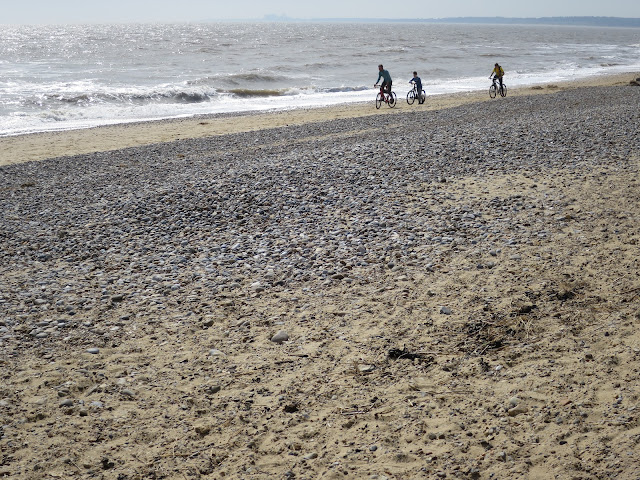 Although there are no icecream stands on Walberswick beach, there is an icecream van in the car park, and that was doing a surprisingly good trade.  Admittedly, it's sheltered from the freezing wind there, and has even put out a couple of tables for people to sit at and enjoy their icecreams. It also does a sideline in hiring out crabbing equipment, and I noticed from  the solar panel on its roof, that it was running off solar electricity, hence the slogan across its windscreen, FROZEN BY SUNSHINE.  If I'd been able to feel my hands I'd probably have bought an icecream from these enterprising people, but I'm just not as tough as the locals.  I needed my gloves. 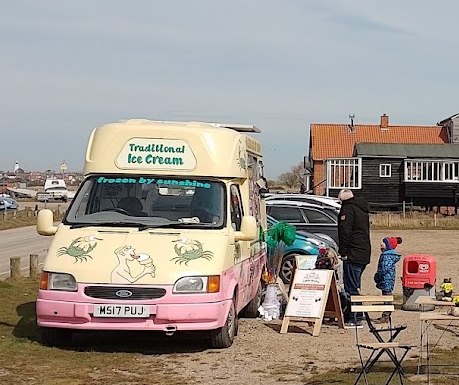 Walberswick is small, but has a long history and many interesting buildings.  The local church presents a strange sight, though. Those ruins exist because Walberswick had been a very prosperous port for hundreds of years, and in medieval times had built an incredibly large and splendid church, one of the most notable in East Anglia.

Unfortunately, a combination of coastal erosion, which silted up the port, the turmoil caused by Henry VIII's dissolution of the monasteries, extensive damage in the Civil War and attacks on its splendid fittings and fixtures by fanatical local Puritans, meant that the church became a liability to the increasingly beleaguered parishioners. Finally, in the 17th century, they sold off the lead from most of their now crumbling church's roof, as much good stone as they could, and whatever fittings and fixtures could raise some cash. They then repaired and adapted part of one of the original aisles to create a much smaller, but still very beautiful and interesting church. 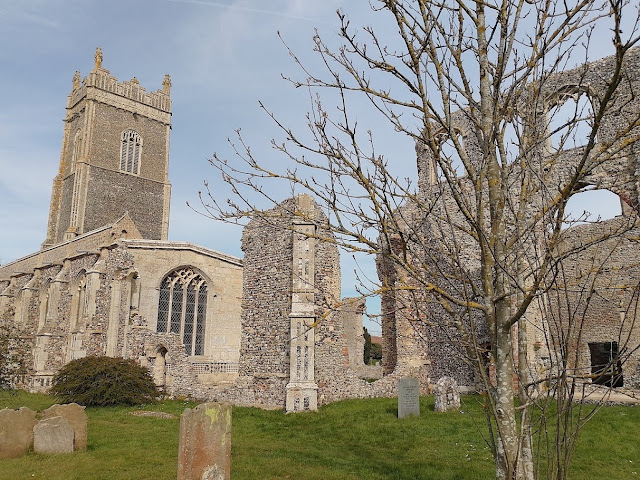 The church has unique features, including a splendid pulpit from the 1400s and lovely altar fittings made from driftwood, but I was puzzled by one unique feature I spotted - strange rune-like carvings running around the bottom of the West Window.  Can you see them on this picture, beneath the elaborate old flint work?  I couldn't find anything about them in the church guide.  They seem purposeful, and are not symmetrical or, apparently, symbolic of anything Christian.  This is the runic alphabet 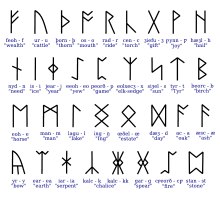 but I'm not sure if the symbols match these.  However, if they're from way back, then they might well have been put in upside down or in random order - people often re-used dressed stone because it was so expensive to quarry and manufacture.   But the carving doesn't look, say, a thousand years old, or anything like that, so I can't imagine why anyone would have been allowed to carve this on a church in more recent times. I asked son in law G, who knows a lot about folklore, but even he seems puzzled. 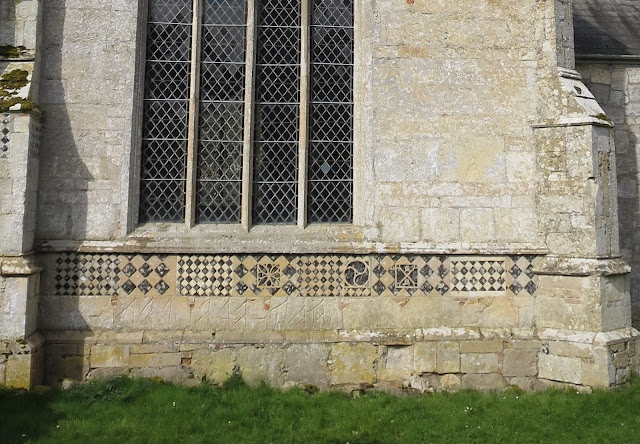 Mind you there are some pretty odd things on this church, including at least one very rude sculpture, high up on the roof, which should not be reproduced in a polite blog like this one.  Ancient churches were often covered in symbols of evil as well as of good, and discovering these remnants of past lives is one of the reason I love exploring English country churches so much.   There is a lot we don't know about how ordinary people lived, thought and worshipped centuries ago, when witchcraft and fairies, gnomes, demons and dragons were so very real to them.

I can show you this face, though, marooned in what once a window, now blocked with odd blocks and bricks and tiles. That too looks like nothing I have ever seen before. Is it a person? A fish? A lion that has lost its ears? 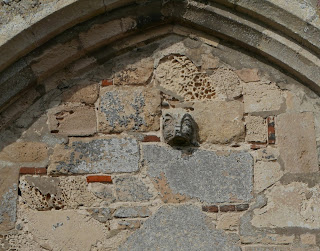 Walberswick seems to have a thatcher and there are examples of his work throughout the place. I liked this roof just up the road from the church, with animals created from thatch on the ridge. 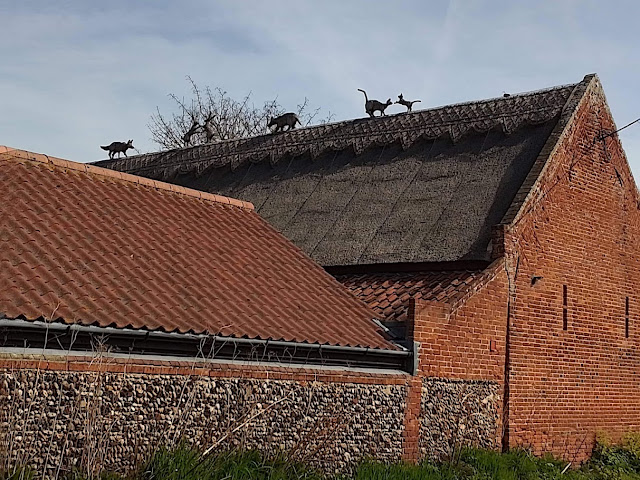 So we revisited familiar places and met up with friends in Suffolk, and returned to London just before Easter. We spent Easter day with K and family and enjoyed an Easter Dove cake which they had lugged home all the way from a little bakery in Italy.  It is a kind of panettone flavoured with citrus and almonds.   It was beautifully wrapped in orange 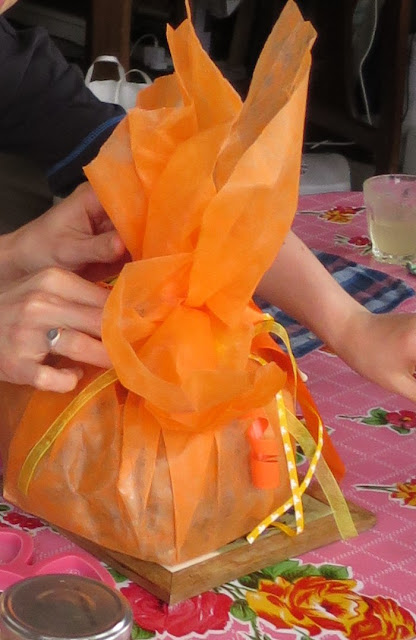 It was hard to make out the shape of the dove, which it is supposed to represent.  Still, it tasted good! 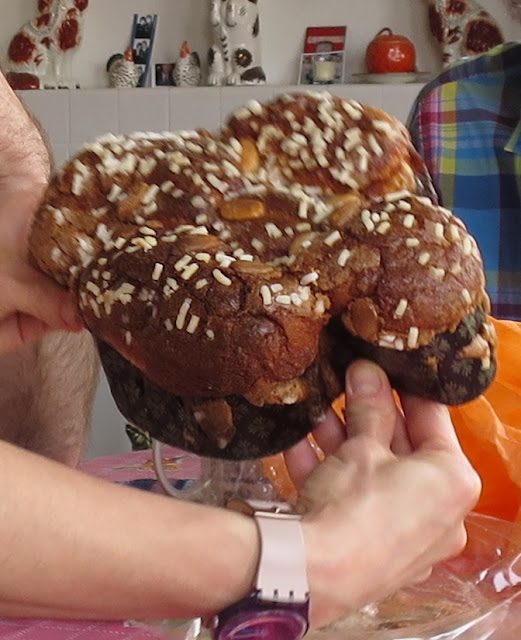 And oh, the Navettes de Marseille I mentioned above.  All French towns seem to have their traditional  biscuits andlocal delicacies.  These little boat shaped, orange flavoured biscuits are typical of Provence, and widely sold in Marseille.  (The other biscuits shown are also from Marseille, similarly flavoured with orange but also full of nuts, and have a different name which I forget.) 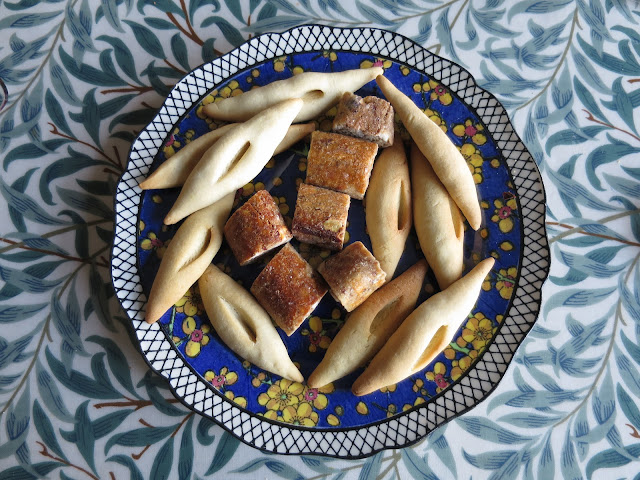 The orange flavour comes mainly from orange-flower-water, a distinctive taste. They're not too sweet, and if you'd like to try them, I don't think they are too hard to make. I found a recipe from "Chef Sylvain"  here. (Sylvain has good recipes for other biscuits too).  I think I will give them a go.
So we had a good Easter week and Easter celebrations.  In this world, where we are bombarded constantly with distressing news, it is good to do what we can to help, but also to remember there are many happy things to do and think about.  I hope your Easter was also happy and peaceful.
Posted by Jenny Woolf at 11:44