Why haven't I been blogging in the last month or so? I think it's because I've been enjoying the outdoors as much as I can - this is my favourite time of year.    Here are a few snapshots of what I've been up to while getting out and about. 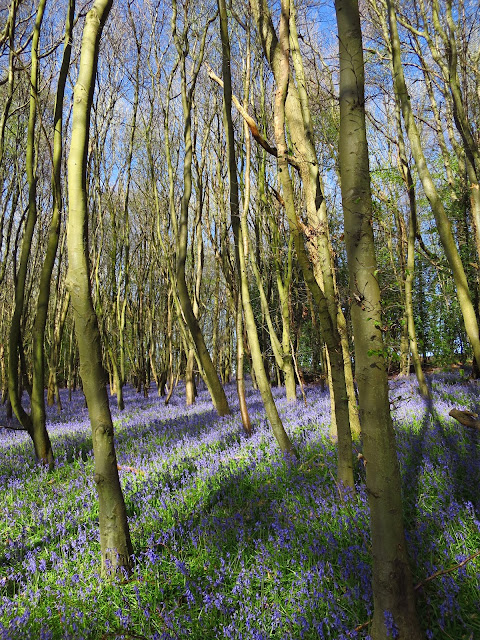 Everyone has been posting photos of bluebells this year, it must be a good year for them. Mine was taken in beechwoods near Henley on Thames, Oxfordshire. Got up very early and so those long shadows are early ones.  It was wonderful to be out at the start of a promising new day.

We had the chance to stay at a friend's cottage in Suffolk for a week, and collected stones on the beach at Dunwich.  The stones on the shore are always interesting and I have collected a few eye catching ones in my time. I live in hope of finding one whose markings look exactly like Elvis's face, so I can sell it for a fortune on eBay. 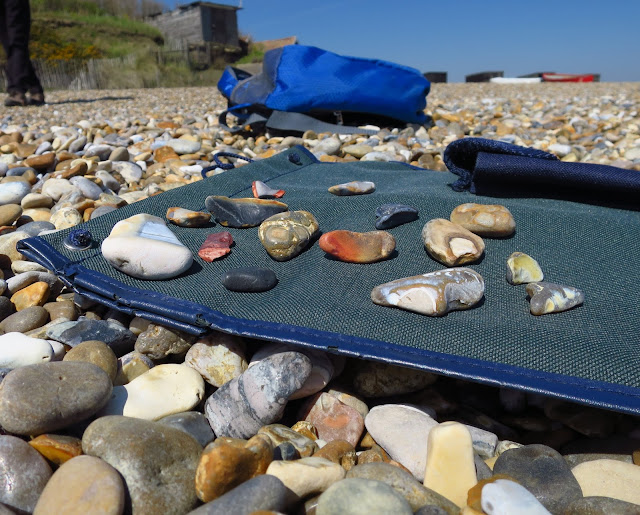 Dunwich is very interesting because most of it has been swallowed up by the sea.  If you ever go, there is a first rate little museum which gives the curious history of the place.   Here's a picture of what it used to look like.   At the bottom is an aerial view of Dunwich today. Above that is the beach, and above that is medieval Dunwich, before it was consumed  I suspect that some of the stones we now find on the beach are originally part of medieval houses, worn into smoothness by the sea. 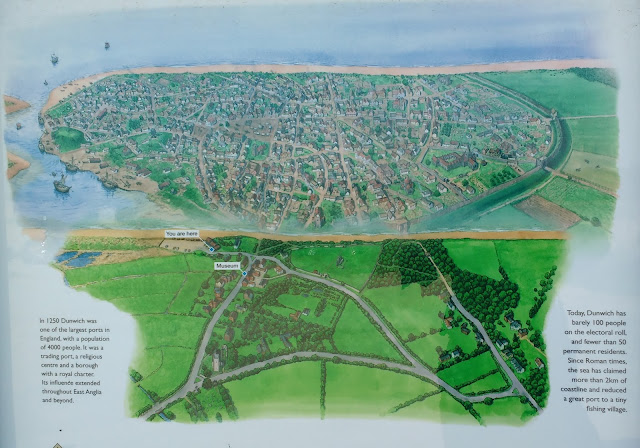 Just across the border in Norfolk I came across one of the fascinating stained glass windows I ever saw, made of fragments of glass of different ages and styles.  Assembling the glass was a kind of hobby for the original owner, an eighteenth century archdeacon, and the result is in the local church.. Here is just a part of the window, and if you can enlarge you'll see the detail. If you are a glass buff,  you might notice just from the look of it that some of the class is many centuries old. 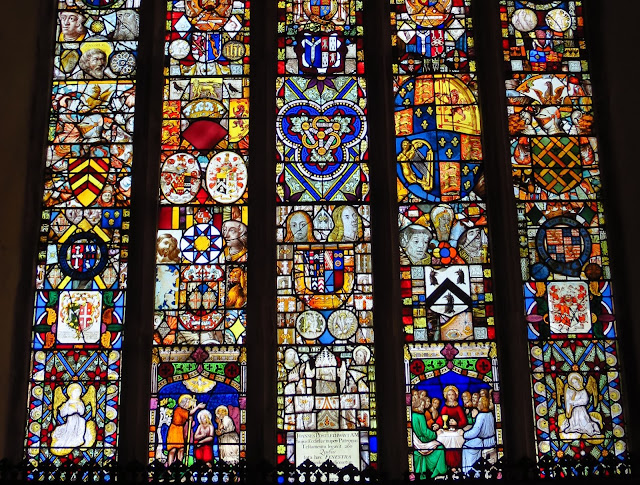 Back in London a beautiful cycle ride through Hyde Park took us to the V & A Museum. They're having an Art and Engineering season,  and this surprisingly beautiful canopy was in fact created entirely by a robot, which is stored in the plastic enclosure in the centre. The project is called the Elytra Filament Pavilion, and you can see the robot building more filaments on 17th and 18th June - just check out the V & A's website. 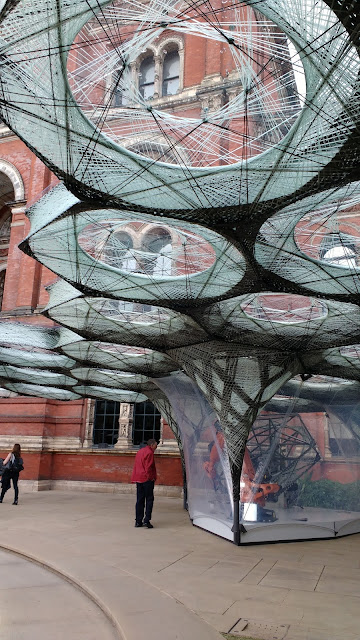 We also saw their show about Botticelli, which had some arresting images, particularly those by Andy Warhol.  You can see one in the background of the picture below, with a dress fabric in the foreground and an Asian style Venus further away. 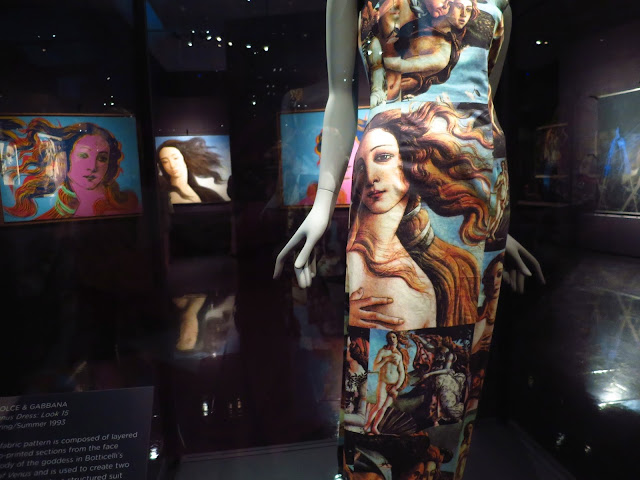 Thankfully it is now nice weather for cycling, so we headed along the Grand Union Canal and saw this house extension (below). I love the idea of a glass extension, but everyone passing on the towpath could see everything inside, except in the rooms where the owner had completely pulled down the blinds.  I was tempted to take a closer picture, actually, but didn't because he was sitting at his desk, looking out of the window right at me..  A charming location, though. 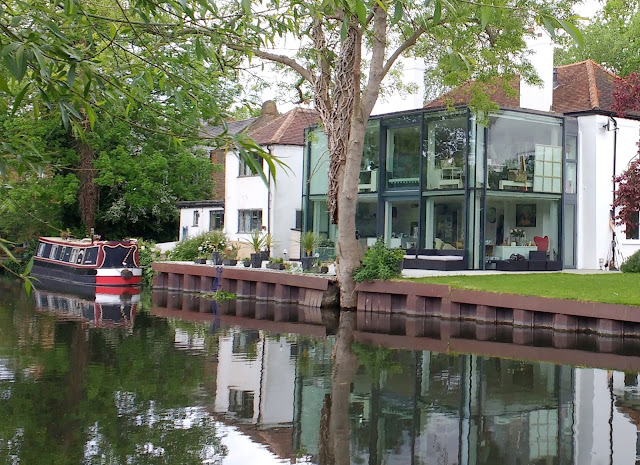 A little further along the canal I spotted some horses drinking, I thought what a peaceful scene it was, the like of which you could probably have seen centuries ago. 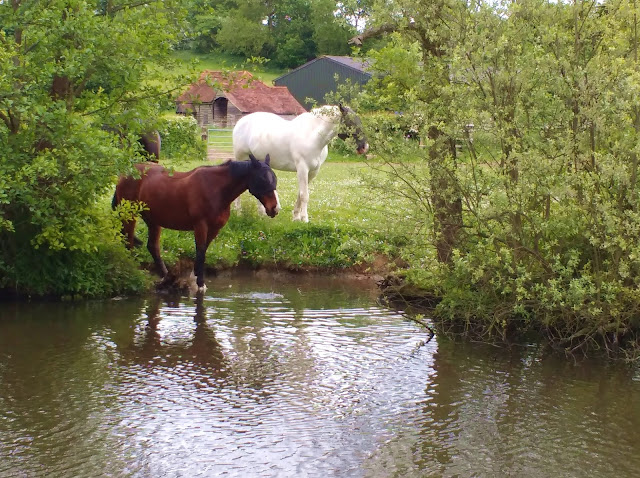 Always fun looking at the residential canal boats, which are often occupied by individualists, artists and craftsmen..  How is this for a guard dog? Although actually it looks quite friendly to me. 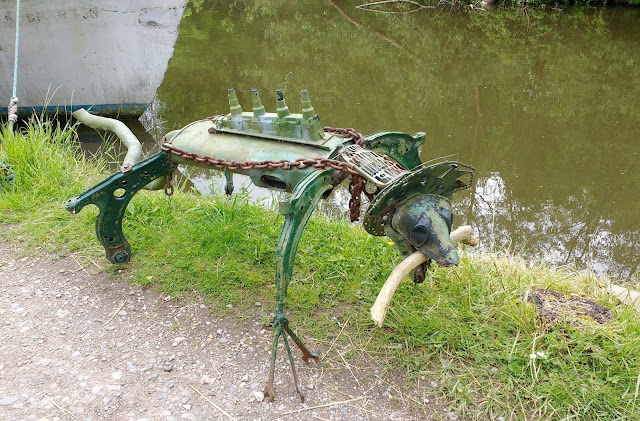 I had a lovely birthday picnic 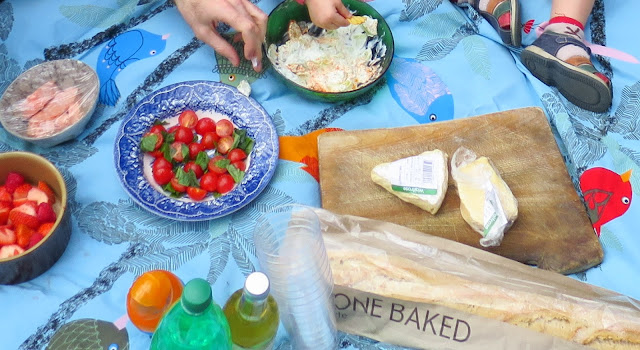 But we lost our teapot when someone decided to see what happens when you throw teapots over the edge of the balcony. 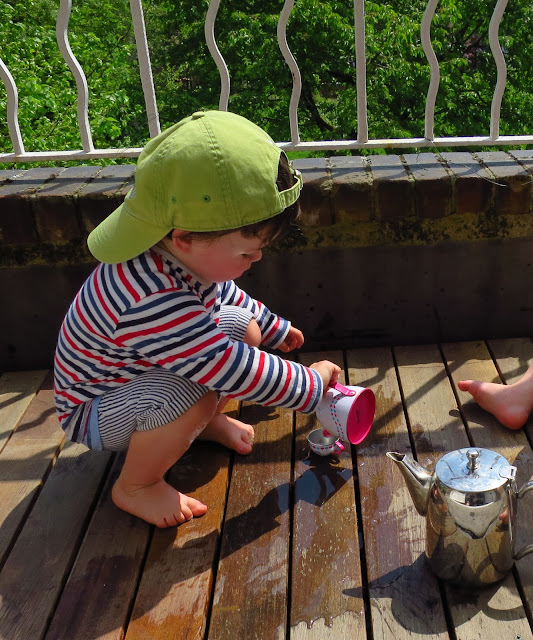 Out and about in London, I passed a shiny golden Maserati parked in the street.  What I specially like are the L plates. When the kid has passed his driving test in this old thing, he can graduate to something more expensive, I suppose..... 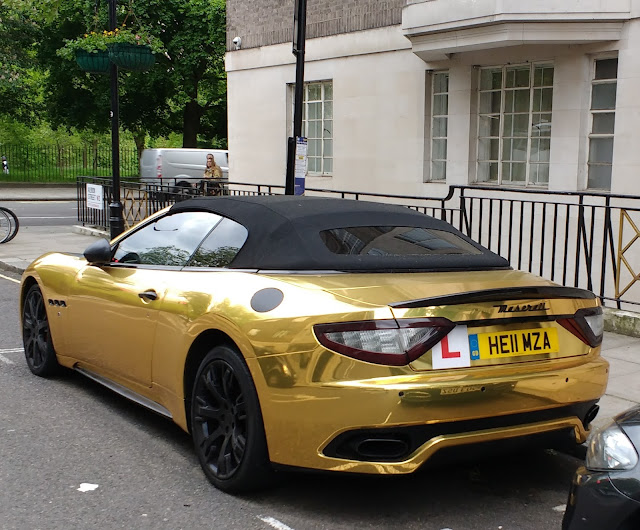 I even went to the theatre. We're lucky to have the Tricycle Theatre near us in Kilburn.  Although it is only small it punches way above its weight and I've seen so many good plays there.  The current one is called "The Invisible Hand" which at first I thought sounded like a Sherlock Holmes story, full of London fogs and middle class Victorians.  It couldn't have been more different. It was an astonishingly gripping and well acted look at how a talented banker held hostage by Pakistani militants offers to invest his way to amassing a $10 million ransom.  You could watch the play on several levels.  It was extremely gripping, and I had no idea how it would work out, but it was full of twists, turns and shocks, and ended up making me think very hard.   The play's writer, Ayad Akhtar, has won a Pulitzer Prize and you can see why.

At home, I have spent too much time obsessing about the Brexit debate. This will probably be of most interest to UK readers, although Americans (and the rest of us) also have to think about the big political decisions in the US before too many months have passed.  Recently many countries have swung to what would once have been seen as extreme views. I've found this disturbing, and I think it is dangerous, so I've been wondering why.

I'll spare you my thoughts on this, though, and instead will finish this post with a hopeful picture. 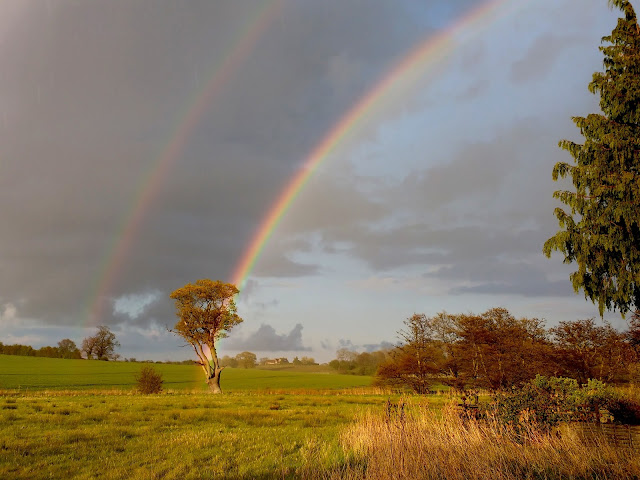 Yes! I found the end of the rainbow! Please keep your fingers crossed that a pot of gold will now appear in my life  - in fact, if the picture is correct, there might be two pots of gold.    If it does, I'll share it with everyone who has commented on my posts so far this year.  Maybe it's a sign I should go and buy a lottery ticket.....
Posted by Jenny Woolf at 15:53