This morning T and I got up early so that we could go to Parliament Square to hear Big Ben chiming at 0812 (exactly 12 hours before the start of the games, which will begin, of course, at 2012 (i.e. 8.12 PM).
t's the first time that Big Ben has chimed out of its usual schedule since the funeral of King George VI in 1952 and it would chime over 40 times.
We knew that there would be diversions with many roads closed. And so there were. Look at the policemen outside usually peaceful and deserted St. James' Palace. (See the the guardsmen in their bearskins in the background?). 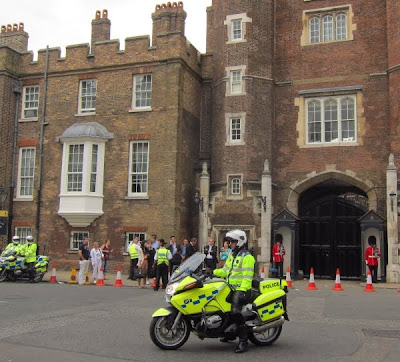 Heavy rain was threatened so we didn't leave ourselves TOO much extra time and just kept fingers crossed that there wouldn't be too many diversions. But help - there were! Miles of them! And for quite a bit of these diversions, we had to walk the bikes, which slowed us down even more. .
Here's The Mall, outside Buckingham Palace, flags at the ready and also large video screens which will come into their own later. 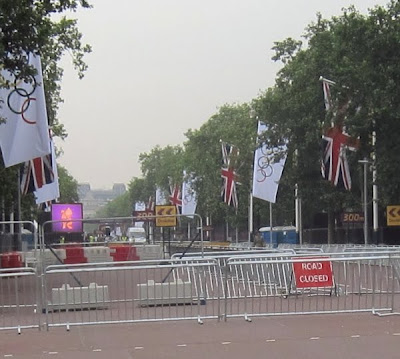 Crash barriers everywhere, and more waiting for later use. See them behind this screen? 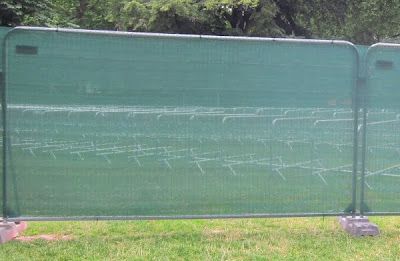 Many wonderful soldiers about. Is anyone is still unaware of the disastrous G4S security fiasco, when this gigantic company announced a couple of weeks before the opening, that their stewarding arrangements were a catastrophic shambles? Plan B was activated right away, and troops and police were drafted in. How reassuring, and good to see them. They were massively polite and helpful, and what's more, they called me "Ma'am" ! (The only other person I've heard called "Ma'am" is the Queen. I could get used to it. )
:) 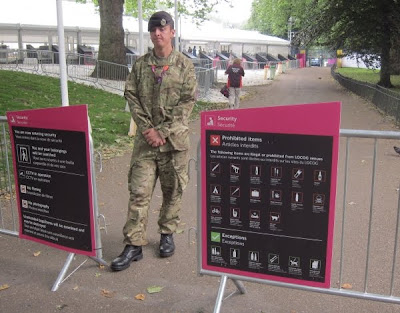 Further and further afield we went, diverted first one way and then another. Time was ticking on, and we would be very lucky to make Parliament Square by 0812 now.
Faster and faster we pedalled, till I felt we could have given Bradley Wiggins a run for his money. Finally we skidded into Parliament Square. Woo hoo! Two minutes to go. And although the weather was misty and strangely dull, a ray of sunshine broke through like a congratulation.. 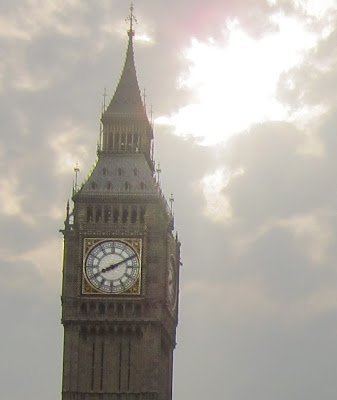 Everyone was waiting patiently with bells at the ready. The crowd wasn't huge - the idea is that everyone should join in with Big Ben and ring bells all round the country for three minutes. 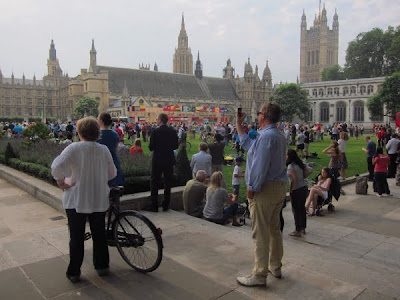 I took a video of the countdown and the chimes, and I spent about half an hour trying to upload it to Blogger. But it just comes out blank. Well, I'll keep trying...
Anyhow, the clock began chiming exactly on time, and it was wonderful. I felt so glad to be part of it, even though I only had a tinkly little bike bell. 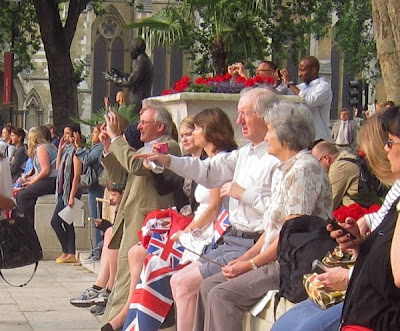 The atmosphere was good humoured and friendly. There were lots of TV crews, but none of them wanted to talk to me. Oh well!
Afterwards we saw some interesting things on the way home, and I aim to write about them soon. And, hurray, the rain held off until we were outside the Marble Arch branch of Marks and Spencers. They happened to be opening their new cafe that day, so staff were giving away free cake and vouchers for cups of coffee. So we went in and admired Marks & Spencer's new cafe 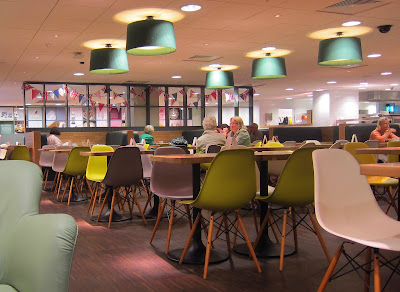 while the heavens opened and the rain bucketed down. It hadn't spoiled the ringalong, hadn't spoiled our visit to Big Ben. And by the time we'd had breakfast, the sun had come out again.
I found it all thought provoking. I hadn't been that interested in the Olympics before it started happening. But now I am so, so, so impressed at the oganisation and efficiency. Hundreds if not thousands of well trained people who all knew what to do, and were as cheerful, friendly and polite. I was astonished at the complexity of it.
Call me stupid - but you know, I really had not realised what an immense undertaking it is in a huge city like London. And I'm so glad that I didn't leave the city for the Games - something I had been tempted to do a bit earlier in the year. 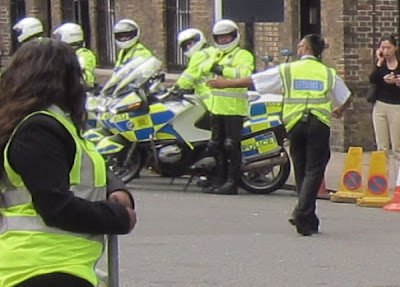 I still hope that heads will roll at G4S after the Olympics is over. Nobody wants to spoil the party, but I still can't get over how they have let the whole country down in such a high profile way. Not just the soldiers and police who had leave cancelled but it was also such a let down for all the people who have obviously worked so hard to make sure that all does go well.
Happy Olympics!
Posted by Jenny Woolf at 16:48