Due to the business of life recently I haven't been able to attend as many exhibitions as I've wanted to. But friends and family have been droning on about how wonderful the Grayson Perry show  "The Tomb of the Unknown Craftsman" at the British Museum was. I hadn't been that keen to go but when my sister in law actually said she would queue for hours to see it a second time, we finally decided it might be worth a look.

T rang the museum up only to discuver that all advance tickets are now sold. You have to go along at 9 AM on the day as they keep a few tickets by.  So we got on the bikes and cycled along, to find the cleaners were just finishing at the museum. 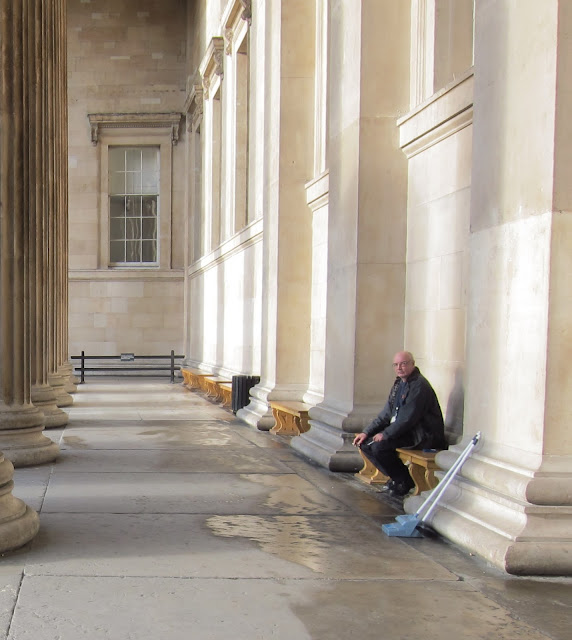 I felt that dustpan and brush won't go very far in the large expanses of floor.

With an hour to fill before the rest of the museum opened, we wandered off to look for some breakfast so we wandered off in to Covent Garden.  Looked in a few shops in the way, like this one, selling vintage fashion design.  To me, this mannequin looked as if she'd been sitting in the fashion mannequins' cocktail bar just a little bit too long. Her hat seems to be slipping over one eye. 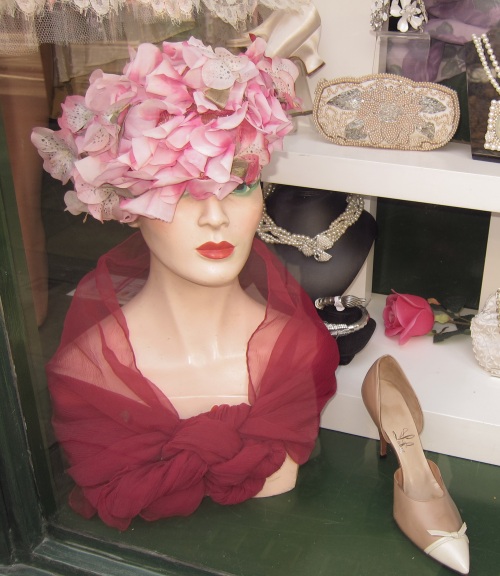 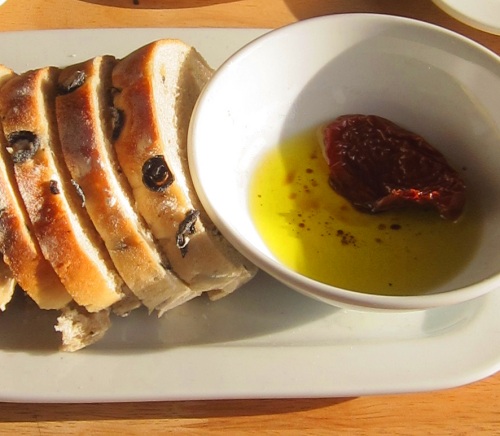 But in the end I settled for a croissant and orange juice from Pret, which was very nice.

Back at the museum, people were starting to turn up - this woman appeared behind one of the huge columns in the hazy sunshine. 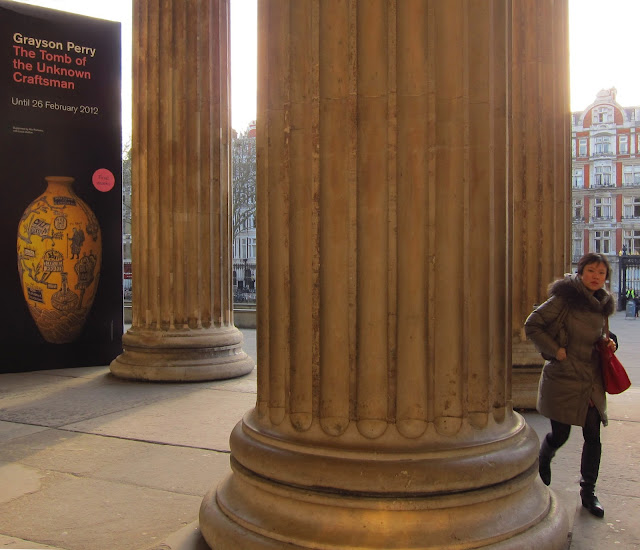 We still had ages to wait as the show is timed-entry.  But there is lots to see in the museum. We visited the room by the front which always focuses on just one amazing object from the museum's collection.    Currently, it's a 17th century model of the Church of the Holy Sepulchre in Jerusalem. Intended as a pilgrim souvenir, it comes to bits so that you can make a virtual pilgrimage through the various parts of the church when you get home.   The church is divided between six different Christian churches - the Greek Orthodox, Syrian Orthodox, Ethiopian Orthodox, Egyptian Coptic, Armenians and Roman Catholics.

We still had time to spare, so we went to see the Assyrian carvings.  The museum has acquired a large amount of the palace at Nineveh, and there are rooms full of beautiful carved murals, so full of life and interest.  Can you spot the cunieform writing across this image of a god? 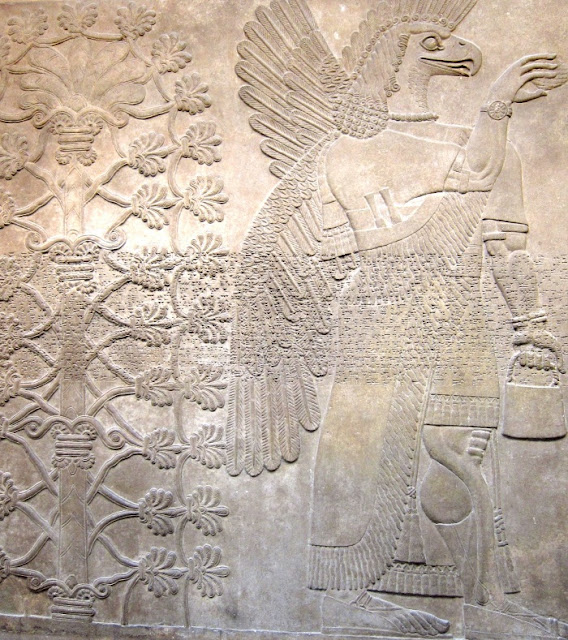 Anyway, finally we made it to Grayson Perry.   Here he is 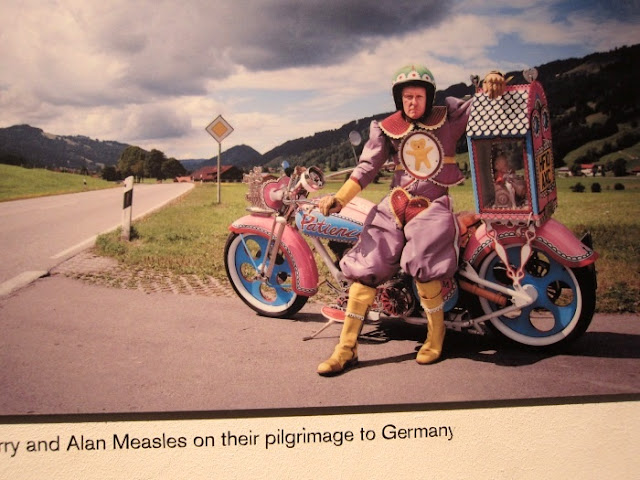 For those of you who do not know Grayson Perry, let it just be said that I had thought he was another of those show-offy artists - and I guess he is. But he's also really interesting, and after seeing his show, I now have real respect for his vision and ideas.

You need to know that he had a terrible childhood and coped with it by becoming a transvestite and creating a fantasy kingdom in his own head, headed by his old teddy bear    I know, it sounds so pretentious. That's why I didn't go to the show when it first opened, after all.

Anyway,  he named his old teddy Alan Measles when he was a child. Alan Measles is now a kind of primitive god or ruler figure in Perry's art. He took Alan Measles around Germany on that stunning pink motor bike you see in the photo.  Here are some photo details of the beautiful bike... 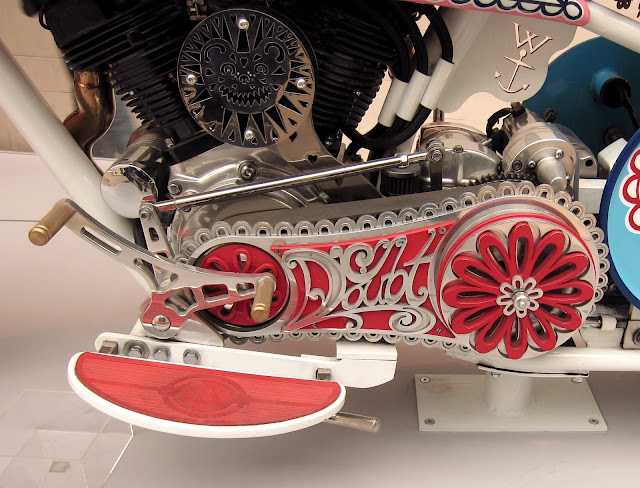 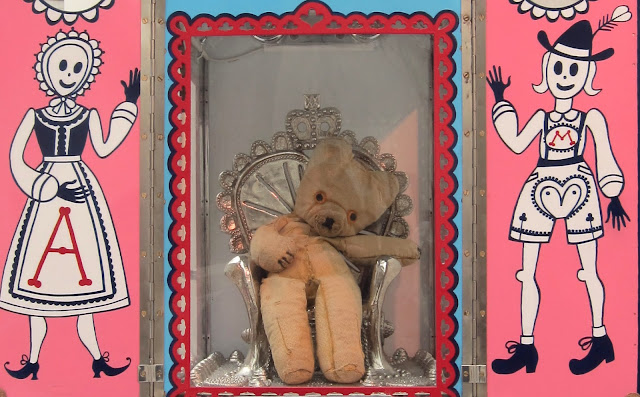 Apparently this teddy is a stand-in for Alan Measles, who is far too precious to be taken on a long motorbike trip to Germany  or anywhere else.

I honestly can't explain the show, specially since I was not supposed to take photos inside (this rule always seems crazy to me).  But I'll just say that Perry took objects from the museum's collection, and linked them with other objects, and his own art work.  He creates many ceramics, but also casts objects out of metal and has produced a huge textile quilt for this show.  He is a beautiful craftsman and to my surprise I found that his work was really thought provoking.

Oh, all right, then, I did sneak a few photos, until I was reproved by a fellow visitor to the show who took me to the door and grimly pointed out the "no photos" notice.

I had to get a shot of this, one of the many extraordinary things he discovered in the museum's vaults. It's an elephant tusk carved in Africa over 100 years ago. It portrays overdressed Westerners in Victorian outfits, and also this woman in a surprisingly modern and triumphant pose. 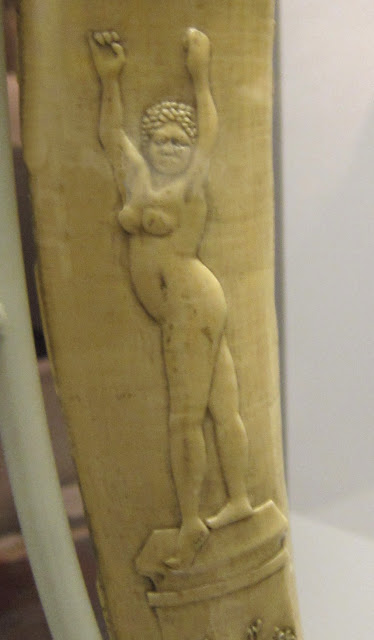 Frustratingly, there was no further information - my one criticism of the show is that there was not more written about the museum objects themselves. I'd have liked to know what this tusk signified.

Another of the museum's own objects was a 200 year old Kate Greenaway style bonnet made of tortoise shell - clearly intended to be worn, but you wonder what it must have felt like.

And there were some splendid old prints, including a Russian one showing a forge in which old people were turned into new ones. You see them stuffing the old folk in at the top, and nice new young people coming out at the bottom.

Perry's vases tell about his life and thoughts. I snapped this vase explaining why he thinks people will come to the show.  They range from students saying they had to do it as part of their course, to a grumpy man saying "I need to have my negative prejudices confirmed.". This lady below, saw it on Twitter. 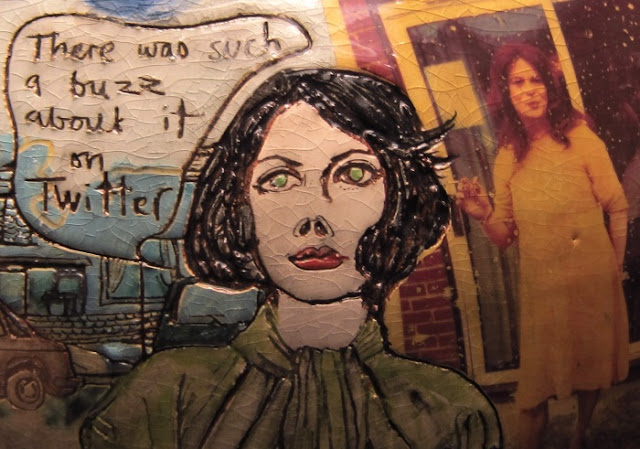 We spent about 2 hours at the exhibition, and yes, it really was worth visiting, juxtaposing all kinds of ideas from different cultures, and then turning them around and looking at them from psychological and artistic points of view.  I have never seen an exhibition quite like it, and I can understand why my sister in law wants to queue up and come back.

After we left the exhibition,  I found myself looking at many of the people I saw around the museum.  I often find that going to an exhibition makes me see art everywhere.   I don't know who this man is, for instance, but I think he has a wonderful face. Hope he doesn't mind me posting it here. I don't know who he was. 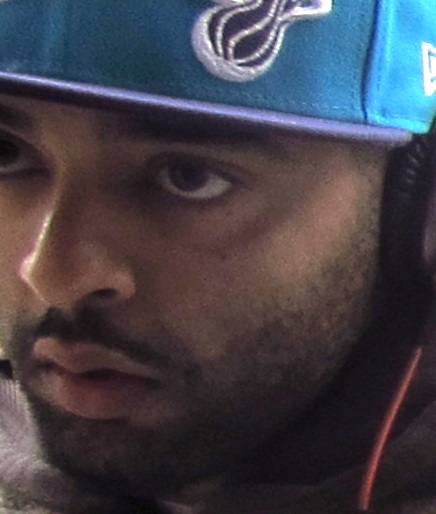 And. I loved this woman's swinging hair as she skipped through the crowds. 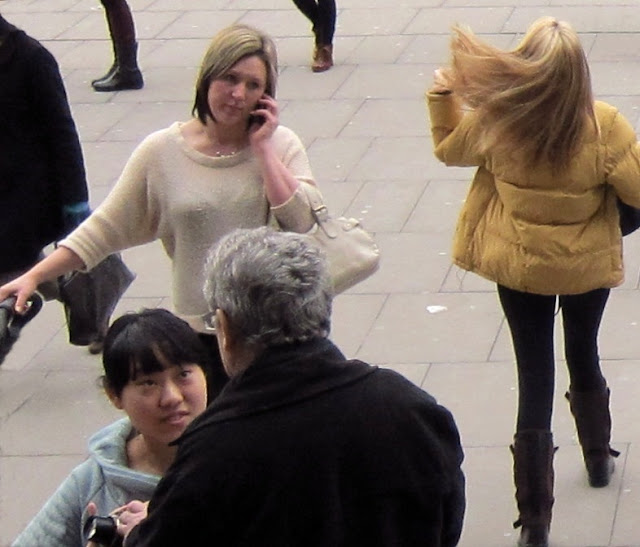 Afterwards, the weather clouded over and became a mixture of sun and shadow, but I had an errand to run, and passing through St. James' Park on my way back late in the afternoon, I saw some snowdrops and realised that Spring is really on its way.  Art may come and go, but nature is always there. 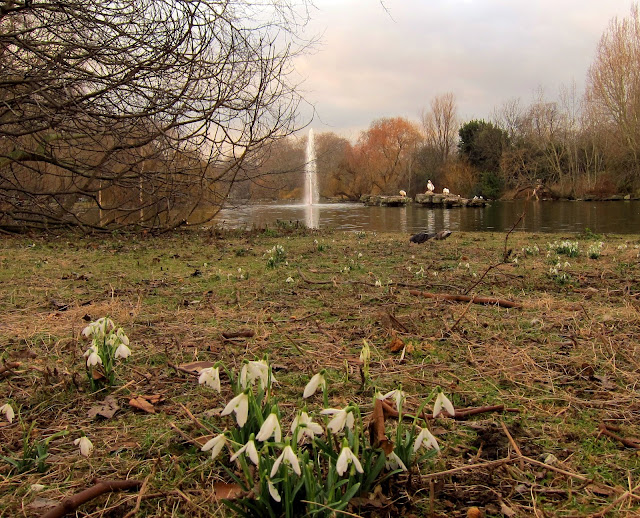