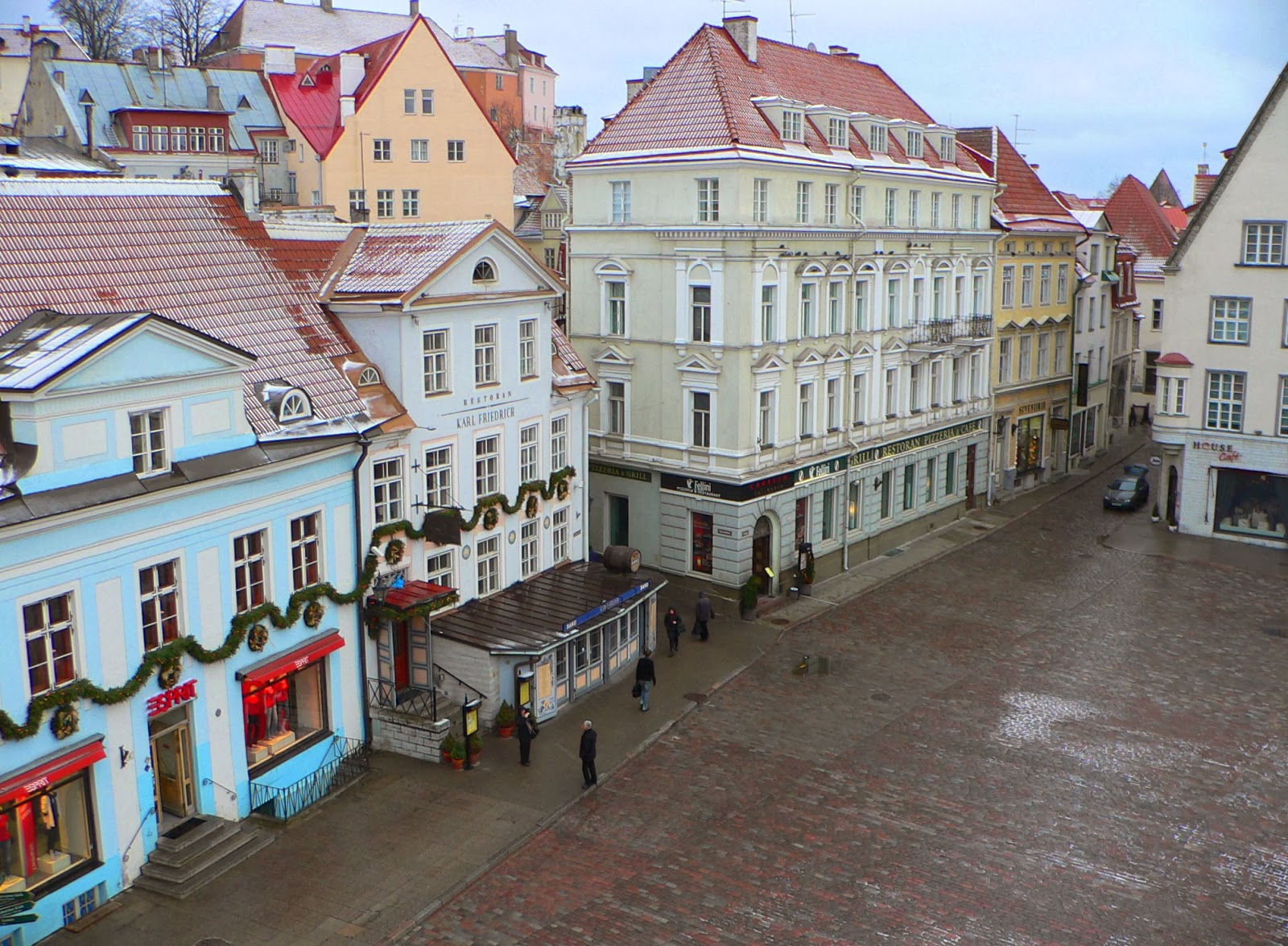 Ambling through the winding lanes of old feels a bit like walking into a book illustration.  This walled town with its carved doorways and swinging shop-signs dates from medieval times, but after the 16th century it all declined and became almost forgotten by sightseers.  It is only in the last twenty years or so that tourists have begun to rediscover some of the people and places which make this medieval bit of ’s capital city so interesting. This “old town” is separated from the city’s new developments by castle-like fortifications and extensive parkland. In its centre is a huge cobbled square, known as Raekoja Plats, dominated by a gabled, stone-built town hall with an immensely tall tower and curious waterspouts in the form of crowned dragons.  Inside the hall, colourfully restored rooms contain silver, tapestries, paintings and some really intriguing wood carvings depicting animals, plants, monsters and maidens. 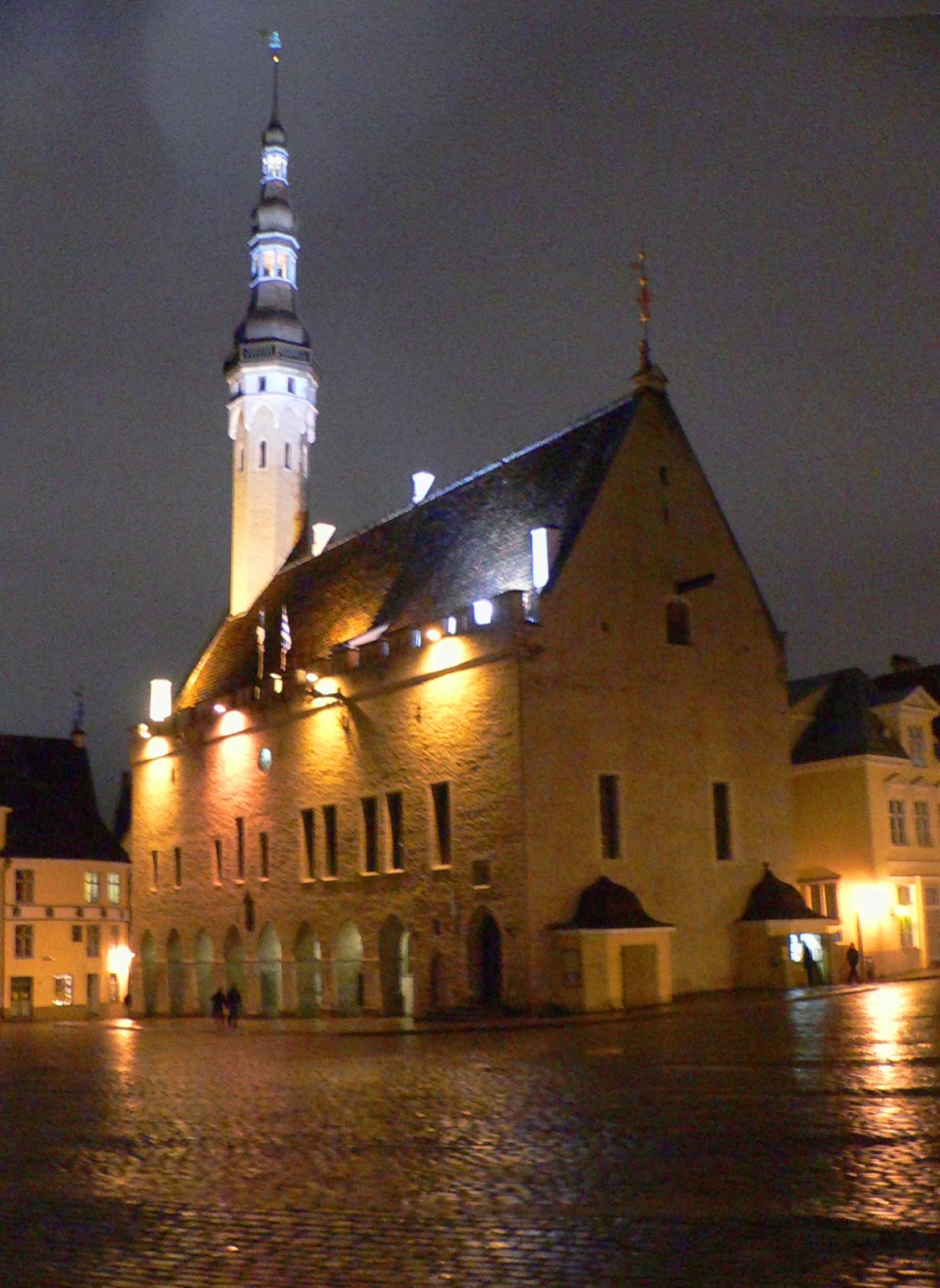 There are many stories attached to this part of town.  In one corner of the square two long stones are set in the ground in the shape of an axe.  They are there because a mad priest called Elias Panicke was served a bad dinner in a local eating house a few hundred years ago. He retaliated by beheading the waitress - an extreme reaction even by the customer service standards of the time. Panicke was quickly arrested and executed, and the stones mark his unconsecrated burial place.

Panicke’s ghost doesn’t walk, but there are plenty that do.  The town’s most ghostly location is probably the gate tower in , at the top of the town. This is reputedly not only home to spectral monks and a pacing lady, but also a fire-spitting dog.  Not only that, but it adjoins another tower which supposedly boasts a glowing skeleton which emerges at night. 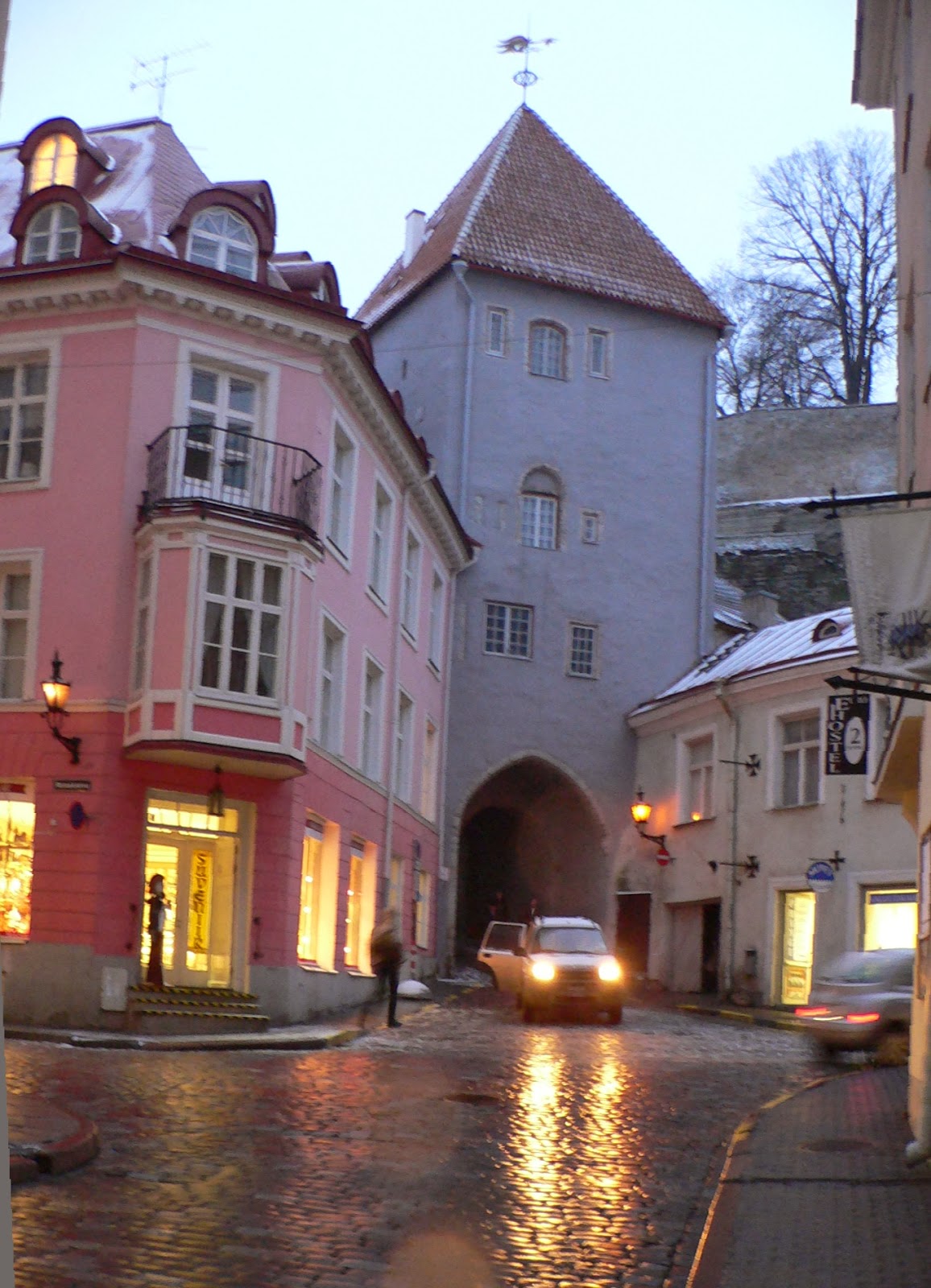 The so-called Cat’s Well on the corner of Rataskaevu and Dunkri streets is another slightly sinister spot. It was thought to be the home of evil water spirits who required animal sacrifices.  The locals therefore rounded up stray cats to feed the spirit. The cats’ sacrifice obviously did the trick, as the well never did run dry – although nobody knows how many inhabitants were poisoned by drinking water flavoured with dead cat.

Perhaps they went for help to the Town Pharmacy, or Raeapteek, nearby (11, Raekoja plats) although the medical displays in the museum might make you wonder whether many of the cures wouldn’t have been worse than the illnesses. Pharmacists six centuries ago were not very effective, but they were very impressive with their strange stuffed animals,  rare, expensive potions and knowledge of magic, herbalism and astrology.  The fascinating pharmacy dates from 1422.  Its modern stock – aspirin, sticky-plasters and so on - is more useful but less exotic than the mummy juice and burnt bees it once sold, but it still has an antique air,  with a  checkered floor, leaded windows, carved benches and a little museum off at the side.

The pharmacy was also a social centre, and began brewing its own alcoholic drink in 1467. Known as Hõõgvein, this health-giving potion contains Rhine wine, cinnamon, nutmeg, galingale (sedge), saffron and ginger, and is served hot. You can still buy it, and it tastes, appropriately enough, like hot cough mixture.

But ’s medievalism isn’t all about legends, and it is certainly not all spooky.  A popular medieval market in the square recalls the town’s trading history by selling goods like traditional smoked cheese, amber necklaces and intricately woven and knitted garments. With its musicians and entertainers and brightly coloured stalls it attracts thousands of visitors every summer.

Looking down on the events in the market square is a weathervane depicting a mannikin in doublet and hose. This is “Old Thomas, ” and he was a real person. In the late15th century, as a boy, he got himself noticed by cheekily winning a noblemen’s parrot-shooting contest with his simple bow and arrow. This left the nobs with their expensive weapons looking rather stupid, and they couldn’t decide whether to punish or reward him. Eventually, they made him the town guard, a job he did very well.  His metal figure has been guarding the city since 1530, although the present one is a copy – the original version is now in museum after being shot down by enemy action in 1944.  It’s worth taking a close up look at Thomas just to see his fantastic handlebar moustache. 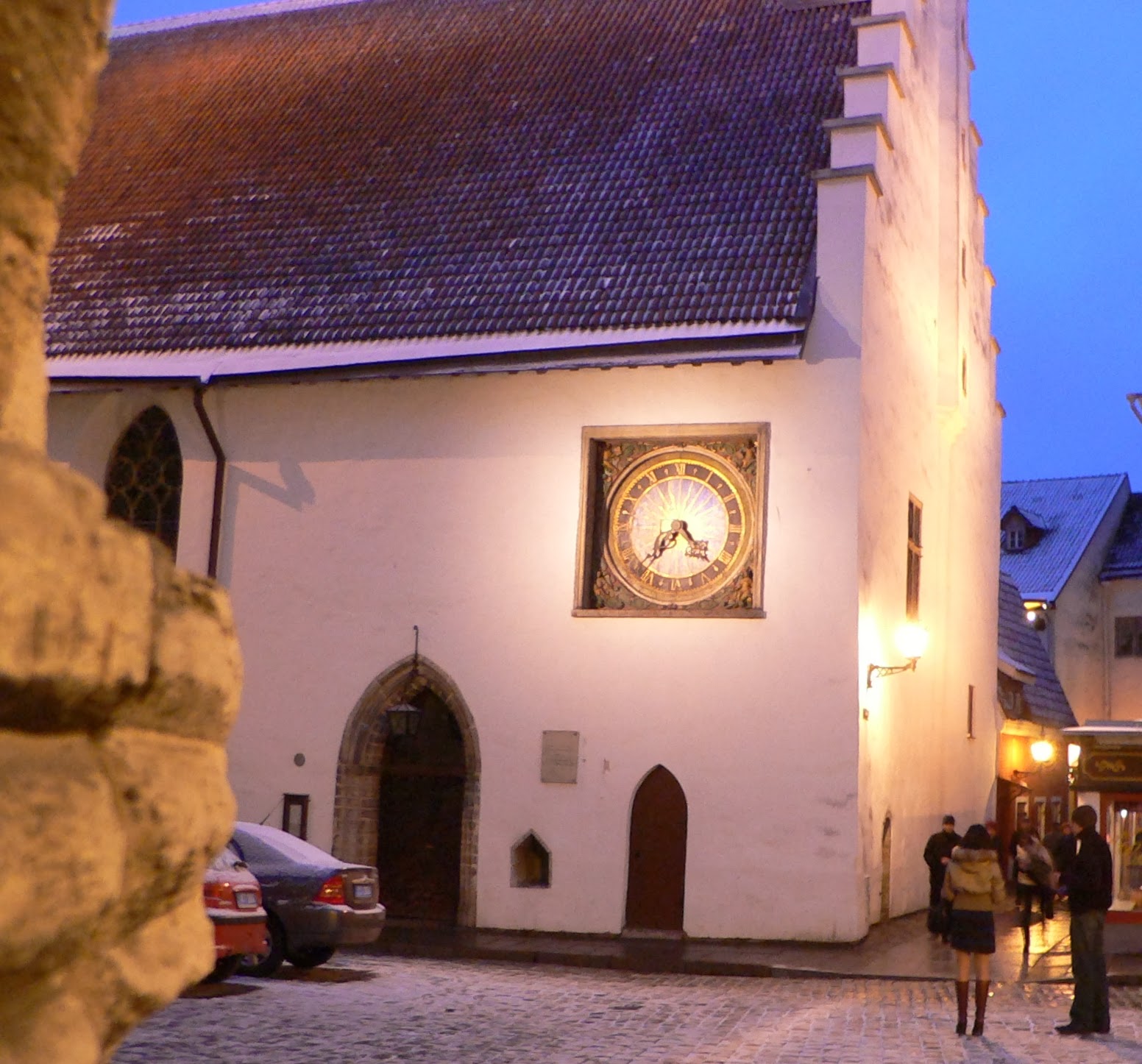 Many of the city’s turreted fortifications survive, and the fifteenth-century Kiek in de Kök gun-tower even has cannonballs lodged in its walls.  Narrow stone steps and cobbled streets lead up near the tower to the summit of the fortified hill, Toompea,, on which ’s parliament building and ’s cathedral stand. From that lofty height you can stand on a level with the weathervanes and view the decorative spires, rooftops and gables below. 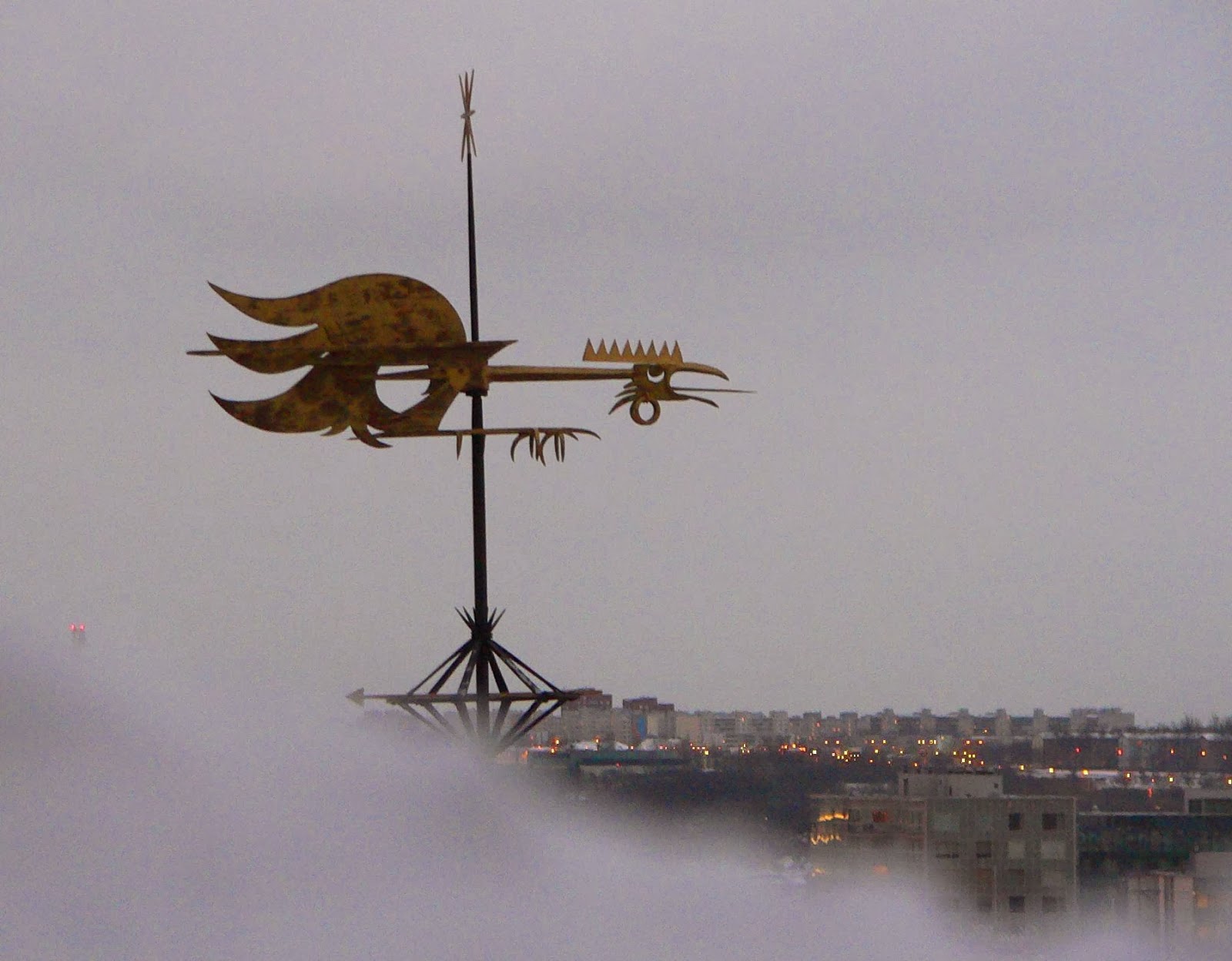 One of Tallin’s most unusual places– a major tourist attraction, too -  is Olde Hansa, a restaurant and shop in a merchant’s house just off  the Square. (1, Vana turg, +372 6279020)  This vast place is lit almost entirely by candles, with wolf-skins slung over the back of the wooden benches and walls elaborately handpainted with huge scenes like medieval manuscripts.  The menu offers only food which would have been served in medieval times, so there’s no potatoes, tomatoes or after-dinner coffee. Instead, there’s bear stew, deer sausages,  honey beer, pepper-schnapps, saffron pickles and more.

Olde Hansa is more than a restaurant: it describes itself as a “household” and it’s certainly an interesting, almost utopian concept.   Auri:Hakomaa, its owner, had so hated the monotonous conformism and soullessness of the occupying Soviet regime, that after became free he made Olde Hansa into everything he felt the was not: a re-enactment of a personal, individualistic, colourful past. 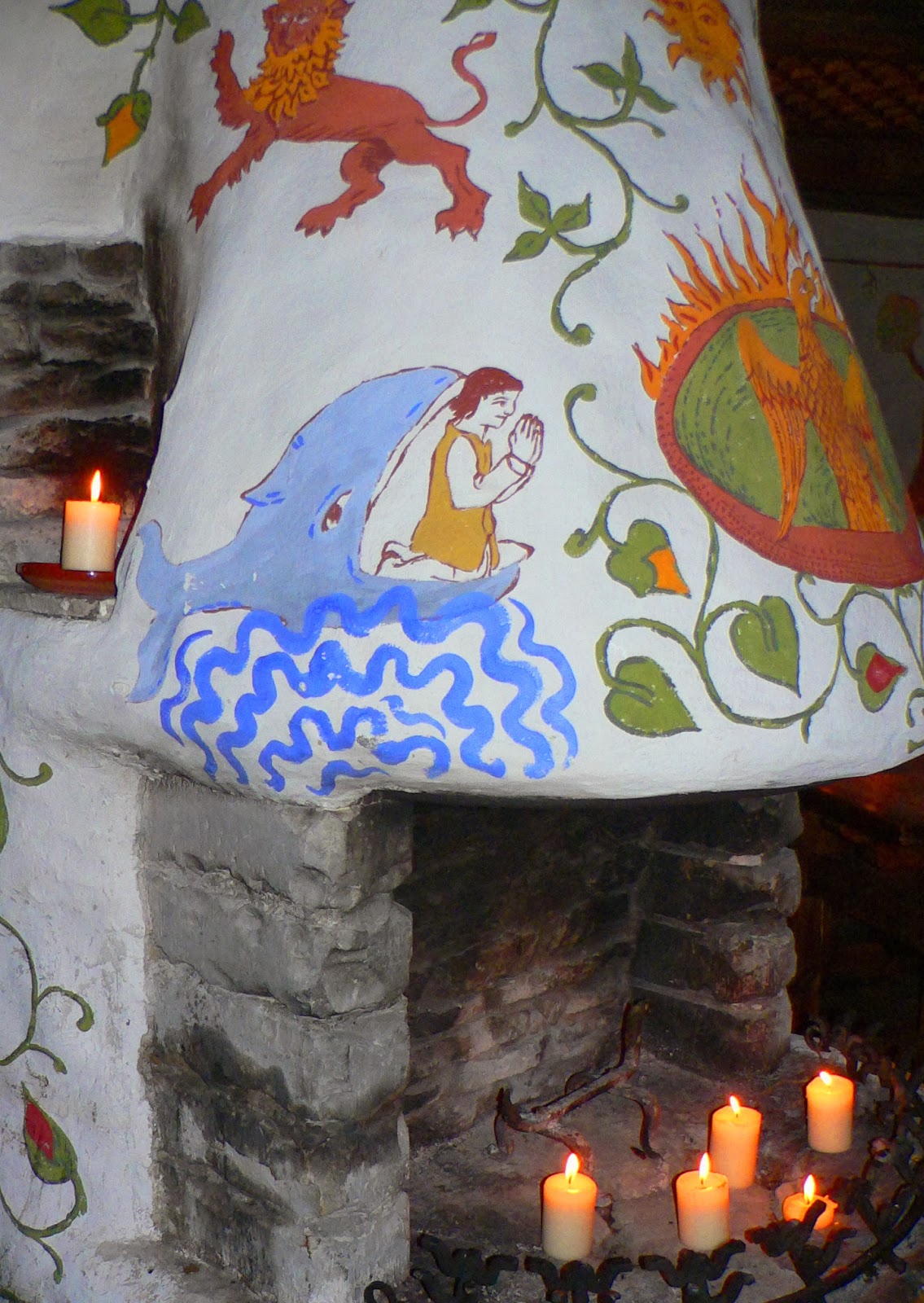 The “household” even has its own guild, in the tradition of ’s merchants whose guilds closely regulated their lives and businesses.  The guild members who work at Olde Hansa socialise and even holiday together, learning how to create art and music in medieval style.  It’s a strange idea but it really works – even the women playing live music on the recorder and guitarra seem to be having fun, and the attached shop, which sells (among other things) medieval robes, pointy-toed shoes and candles perfumed with wood-smoke, is a sociable place. 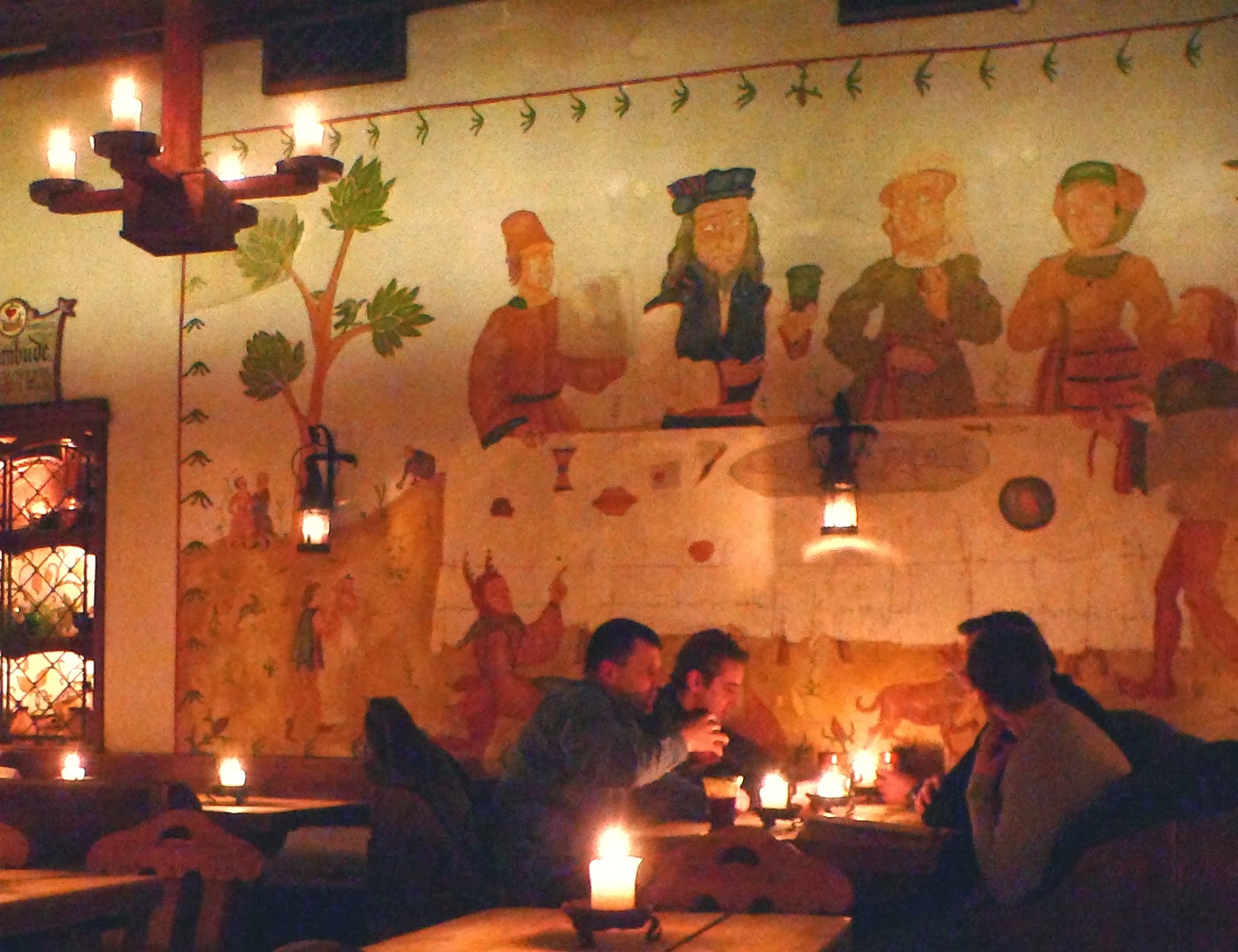 The town has other fine medieval restaurants, including The Chateau (19 Lai, Tel: +372 6650928,)  where you can feast in a fabulously atmospheric smoke-blackened cellar decorated with countless antlers and lit with candles stuck in vast heaps of wax.

is developing its medieval past in other interesting ways. Several of the old houses have been converted into fine hotels, just steps away from the main attractions. The Merchant’s House, for instance, has medieval painted ceilings and stone stairs, but also a unique ice-bar with silver walls in its vaults, where drinks are served in goblets made of solid ice. (4/6 Dunkri, +372 6977 500) 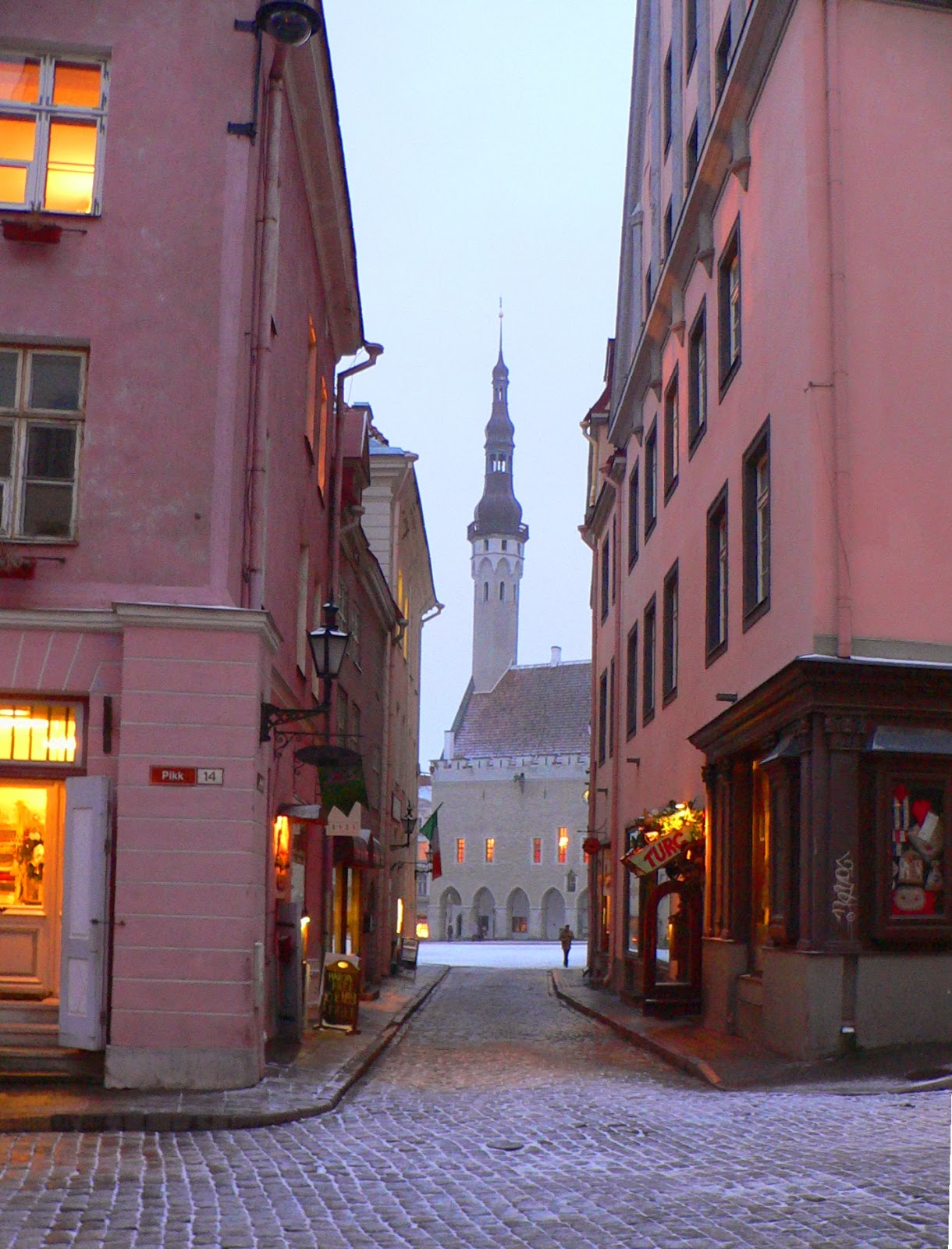 The 13th century Olaf Church (48 Pikk Street), with its 124 metre spire, is not only the tallest building in Tallinn but was also a KGB listening post when Estonia was occupied as part of the USSR.     From there, the Russians could hear conversations from as far away as Stockholm.  Today, visitors can see a panorama of the city from a video-monitored viewing platform around the spire. The first 136 steps lead anti-clockwise up to a welcome rest area. Then, the remaining 107 steps go anti-clockwise. Just before the top you can take a close-up peek at the bells.

Marzipan has been made in Tallinn for at least five centuries.  You can see some of the most intricate marzipan creations at the Kalev marzipan room at 16 Pikk,  then take coffee and cakes in the adjoining Maiasmokk, the city’s oldest café (its name means “Sweet Tooth”). The interiors are what you would expect with elaborate mirrors, dark wood furnishings and glittering lights.  The sweets, too, are made from old recipes, and depict fruit and vegetables, animals, birds, houses, and even edible dolls, all of which are hand-painted in bright colours. 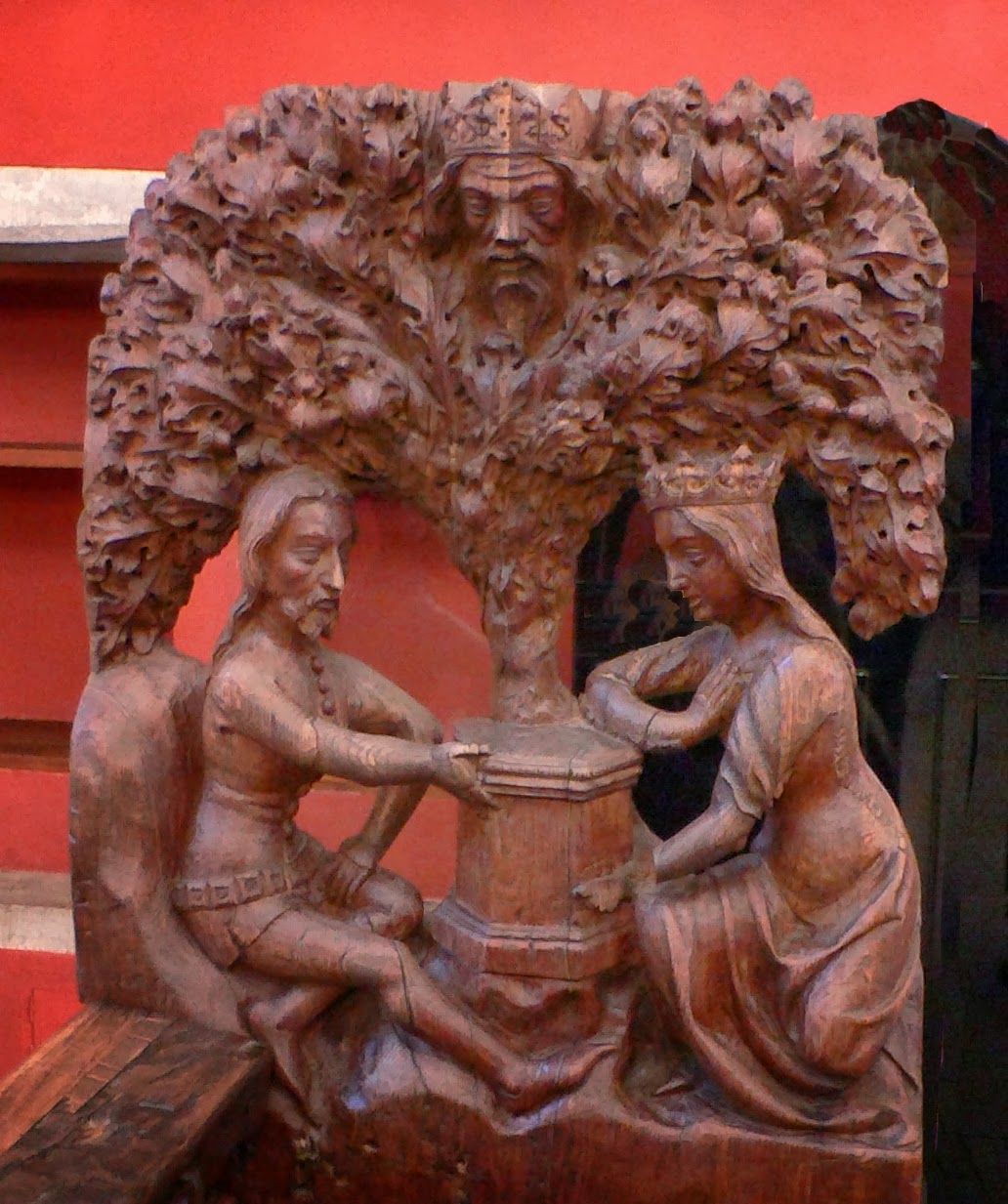