A Long Weekend in Durham.

A LONG WEEKEND IN DURHAM

“Luxury! A massive HD television and loads of biscuits!” enthused Sid.      The Beamish Hall Hotel in Co. Durham had got it right as far as this ten-year-old was concerned, and I hoped he wouldn’t just want to stay in the room for the entire trip.    But there are some good child-friendly things to do around Durham, and Sid was actually keen to expand his mind as well as overdose on biscuits and “Top Gear.”

So, after he'd had his fill of telly and biscuits, we set off to see what we could see.      And of course, one of the best attractions was right on the doorstep.  The Beamish Open Air Museum has a three-hundred-acre site on which several convincing historic settlements and landscapes are re-created from genuine redundant buildings or built around existing ones. 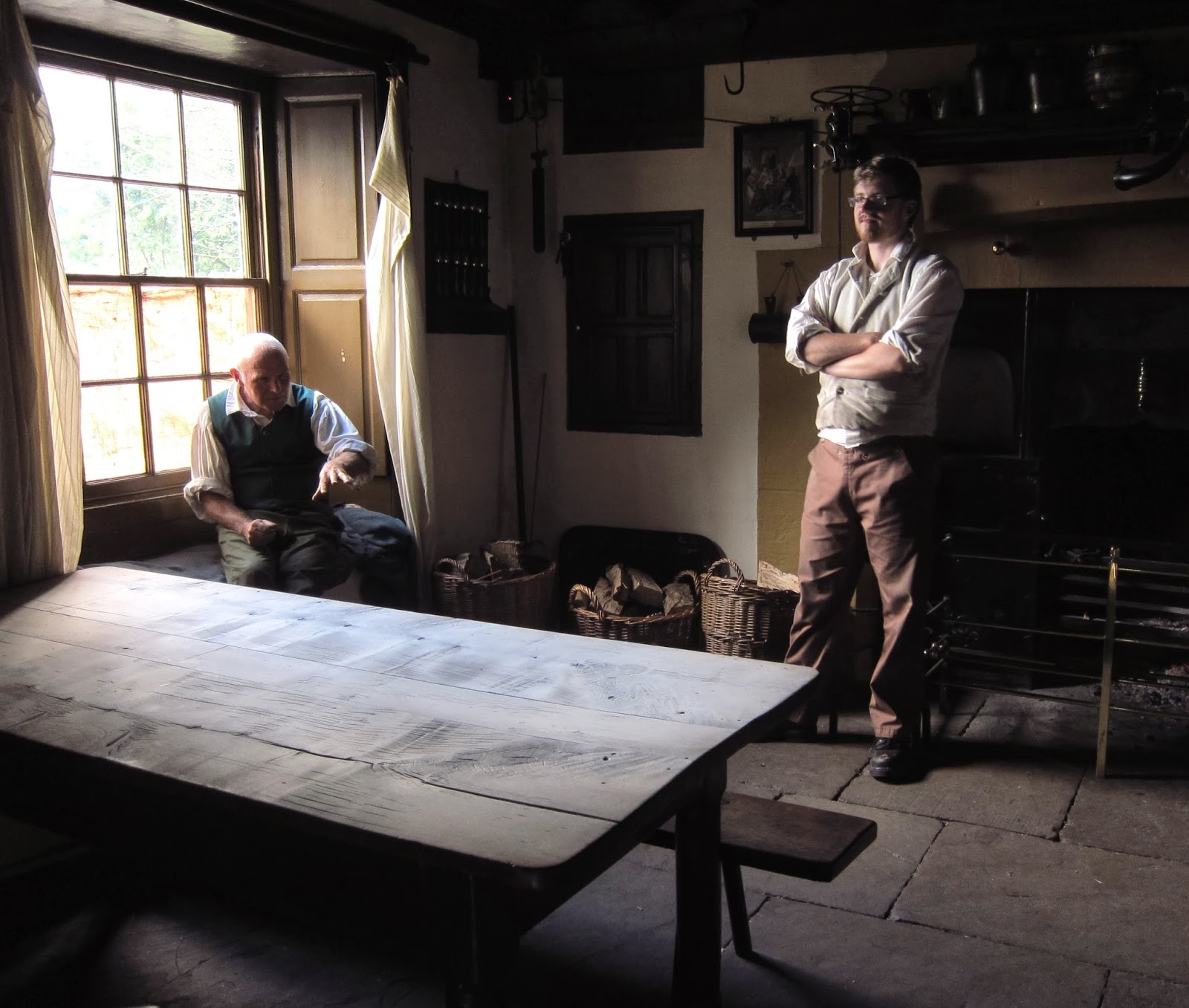 .
Sid immediately fell under the place’s spell.  There is a a mining village, complete with excellent fish and chip shop, and a Georgian farm and manor, spare and elegant, with pigs, horses, sheep, geese and hens in the grounds, There's also a little 1913 town with station, bank, Co-Op, terraced homes and businesses whose open doors are an invitation to enter the fussily decorated world of the past.  What brings it all to life is Beamish’s band of devoted volunteers, who dress in period costume to drive the buses and trams, serve food and care for the animals. Whether knitting quietly in a cosy kitchen, 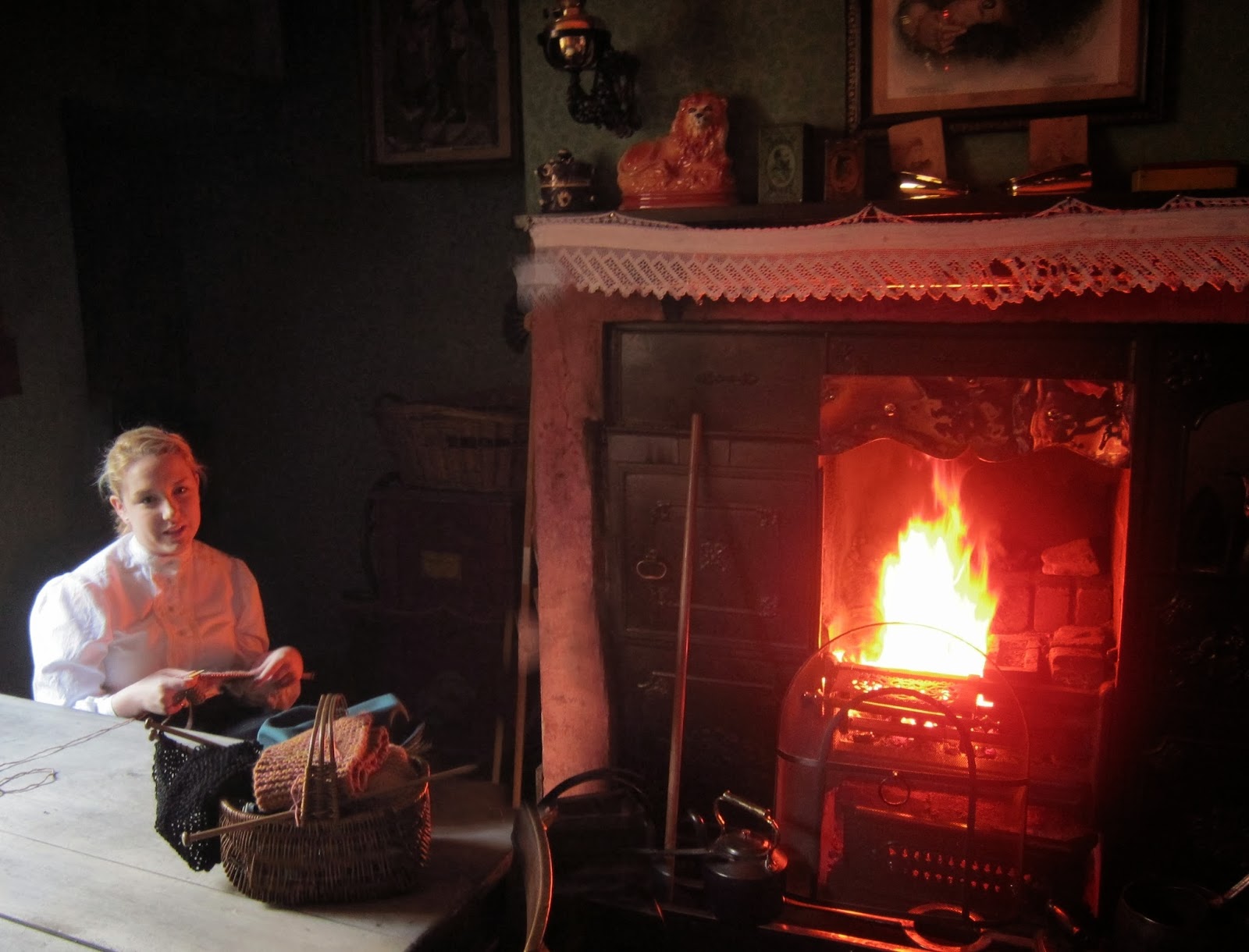 serving pork pies in the pub or grooming the carthorses, they were always ready to talk about their fictional “lives,” not only to Sid but to the many other kids who plied them with questions.

The settlements are linked together by a transport system of vintage buses and trams. We hailed a strange open-topped Blackpool tram, which whistled like a steam engine and looked like a boat.  Dating from 1934 , it added a touch of eccentricity to our journey as we trundled past fields worked with horses, and a small country funfair. After a gingerbread man in the farmyard (in the company of several hopeful hens) we took a trip on the best thing of all, a Georgian steam waggonway.

Our open-top period carriage was pulled by a clanking, hissing replica “Steam Elephant” engine, dating from 1815, conducted by a “waggonman” in a felt hat. He pointed out interesting landscape features of which the goriest was a real gibbet, standing high on the hillside – sadly, without a dangling corpse. 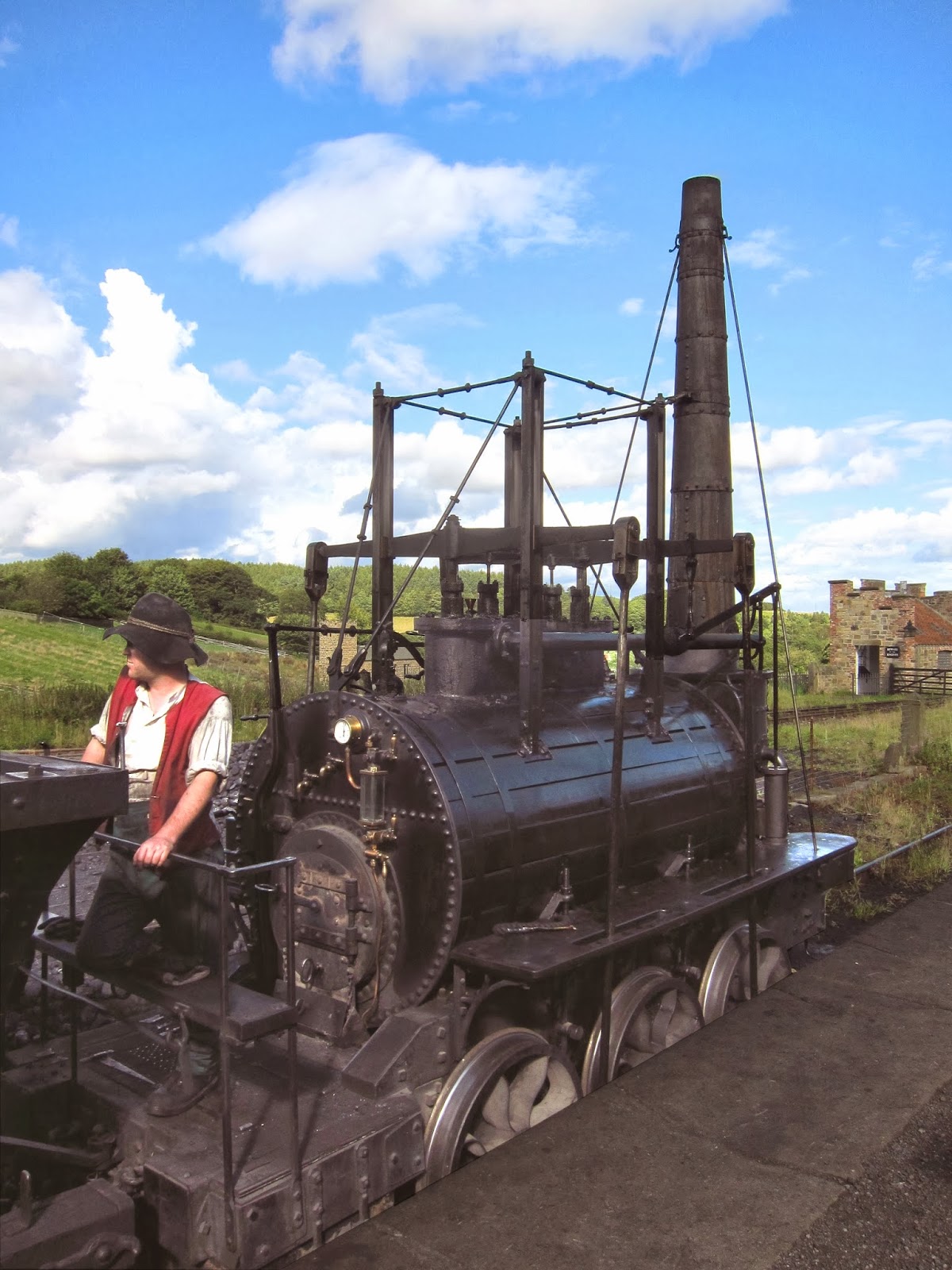 Beamish is great, but Durham has other attractions. It’s a compact, attractive city with many ancient, quirky shops and restaurants lining its steep streets. 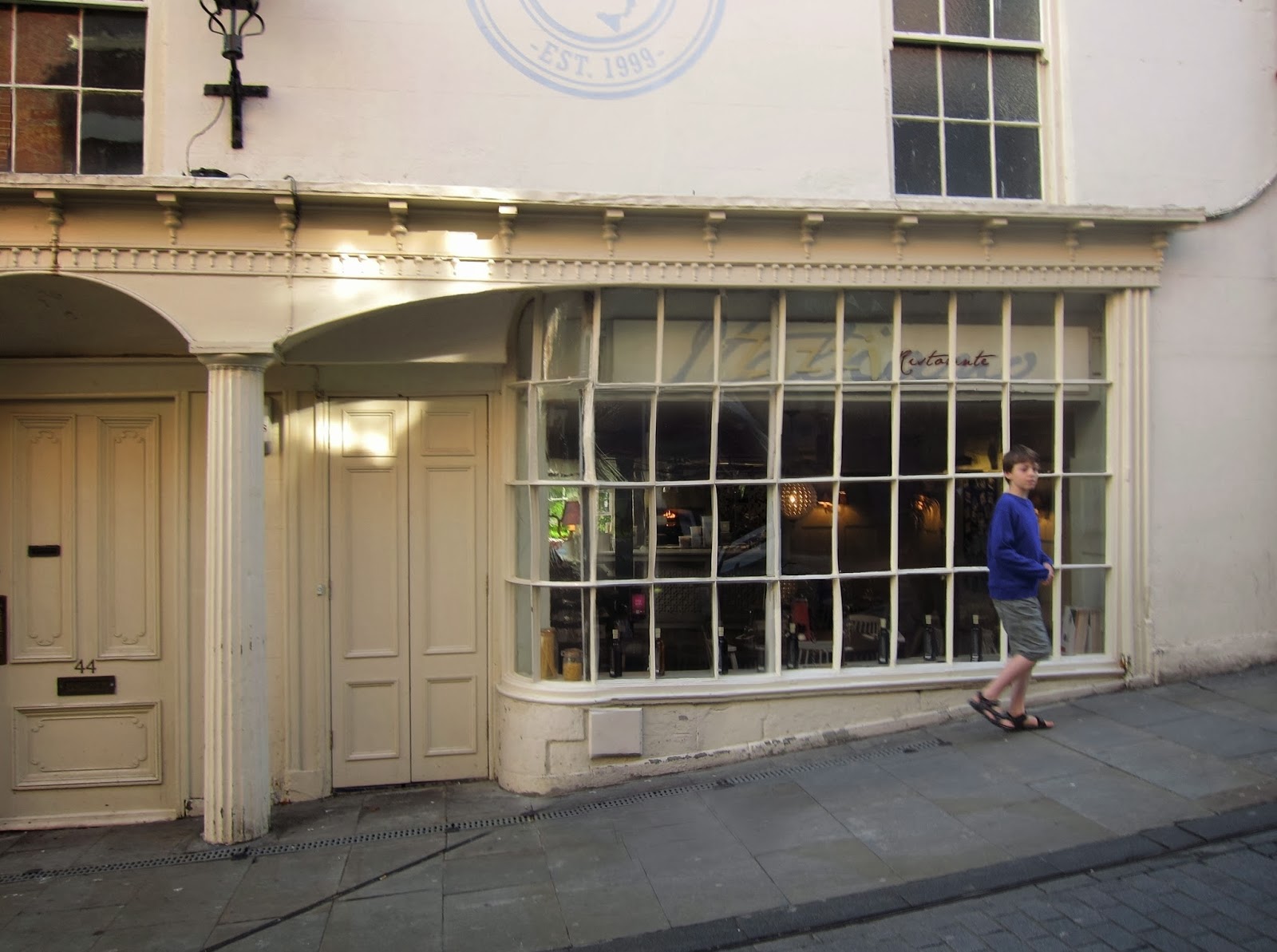 The gigantic  cathedral, England’s greatest Norman building, is the burial place of the 8th century scholar, the Venerable Bede, as well as St. Cuthbert.  It is also on the Harry Potter trail –  Harry releases the owl in its cloister in the first movie. Sid was mildly impressed at that, but preferred hearing about the dramatic patchwork of saints, battles, politics and legends that make up the cathedral’s real-life story.

The railways were born in the North East 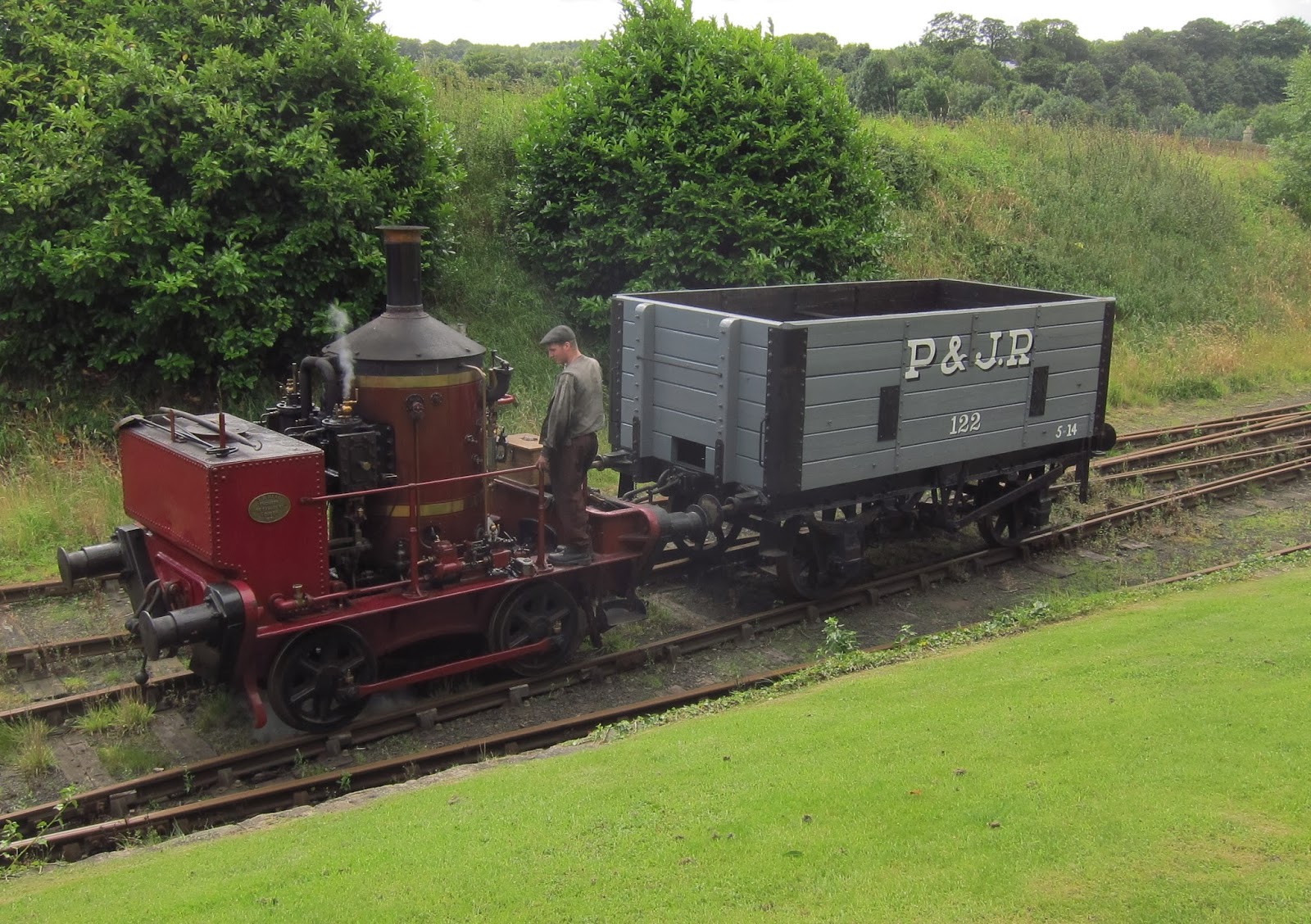 so there was every reason to visit “Locomotion.”  This offshoot of the National Railway Museum, based in a new building in Shildon, has many good things to see. I liked a grandfather clock decorated with early railway paintings, 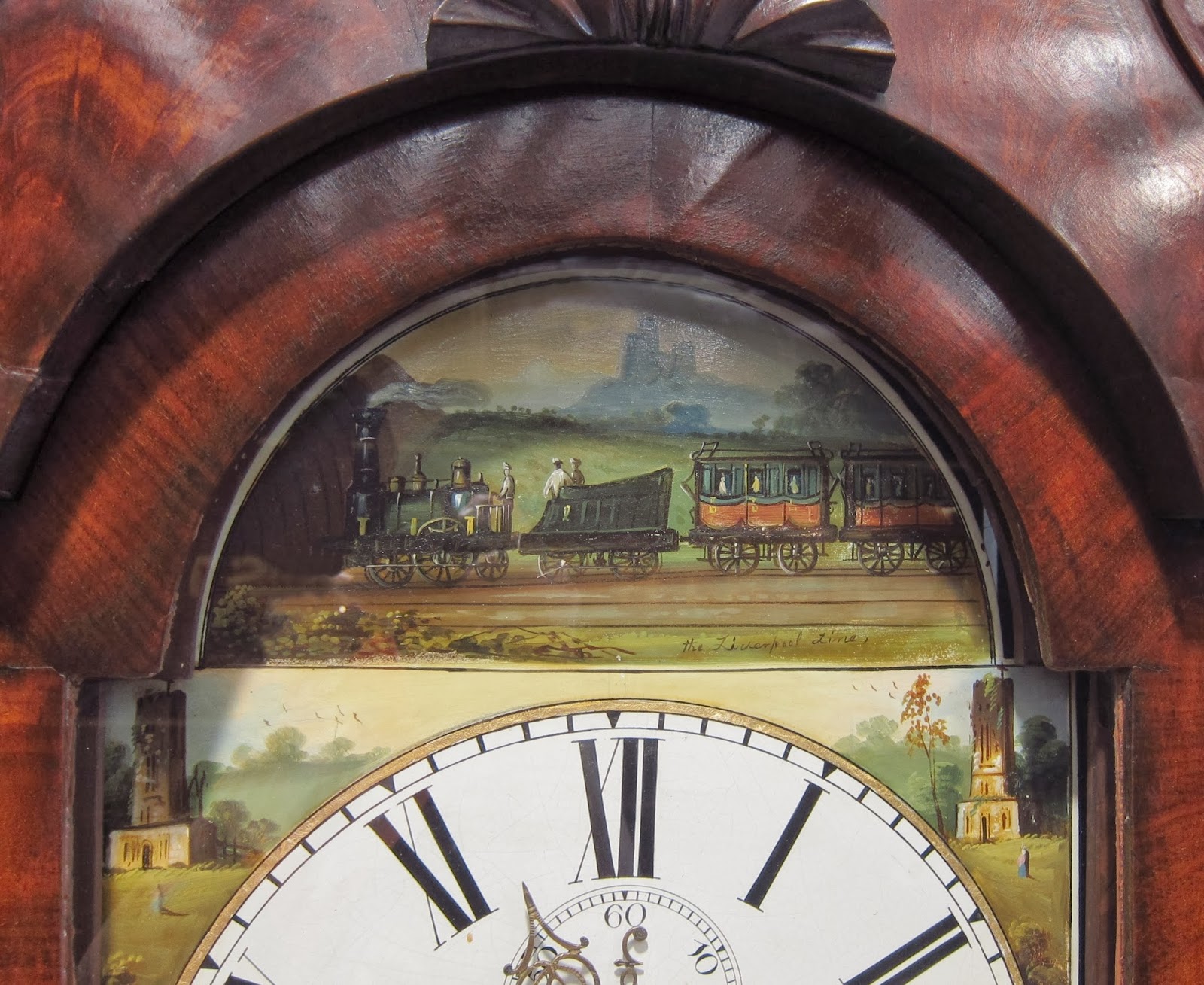 ]
and was interested in the ill-fated High Speed Train, cynically axed by Mrs. Thatcher within days of its unveiling, for political reasons.    Sid, a rail fan, had already been thrilled to bits by travelling first class to Durham on East Coast Trains, and he simply loved everything, from the restoration workshop to the railway-themed playground outside, to the ornate cabs full of mysterious objects. . 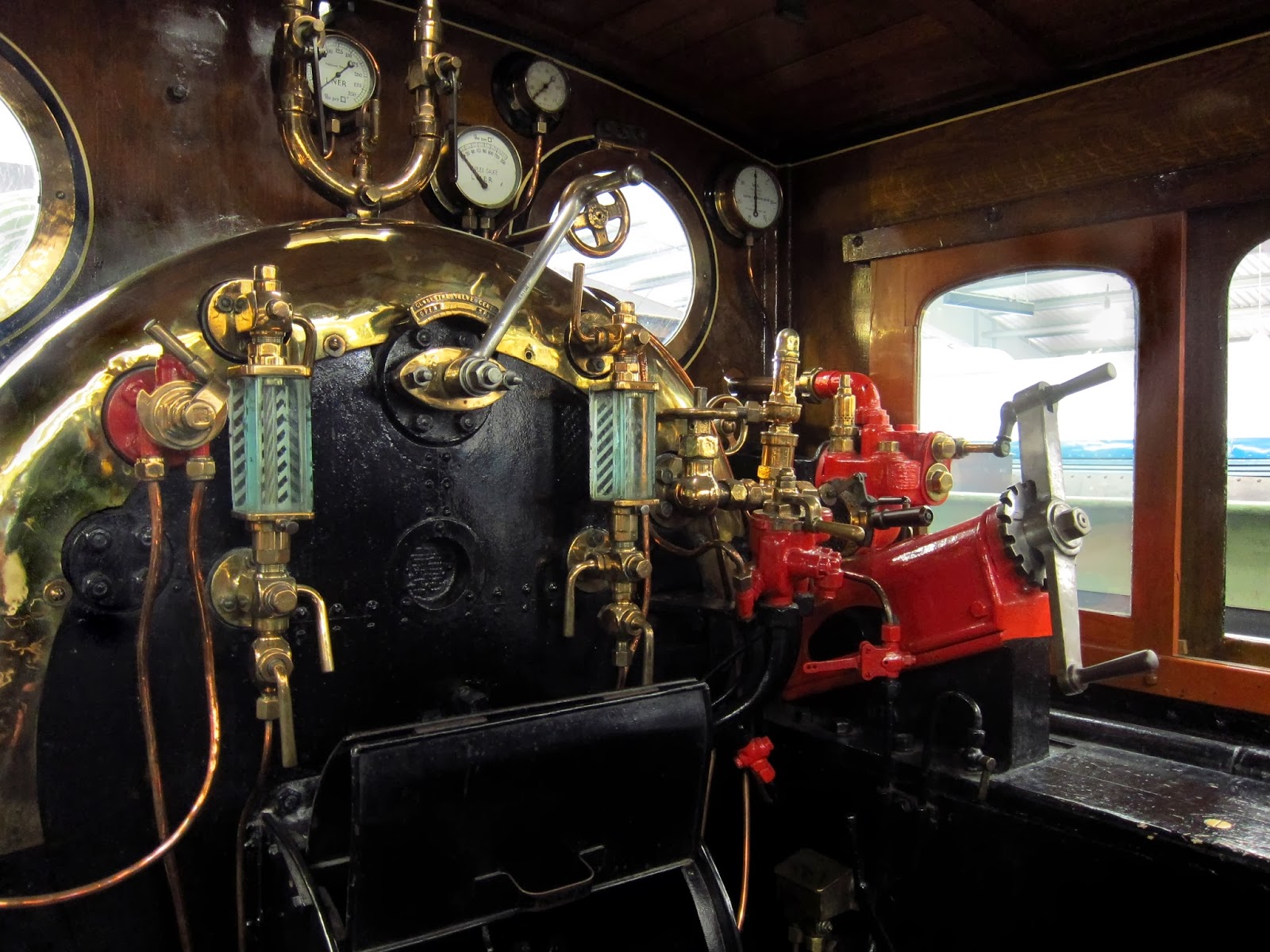 There was more.  Back near the hotel again, Beamish Wild is an activity adventure and bird-of-prey centre, whose woodland site offers eagles, owls and kestrels as well as tightropes, tall trees and zipwires.  It was brilliant, with a flying demonstration as a real high spot. In this, the bird-handler,  Sheena, cleverly involved everyone in learning about different birds of prey, and Sid even got to hold a real harris Hawk. 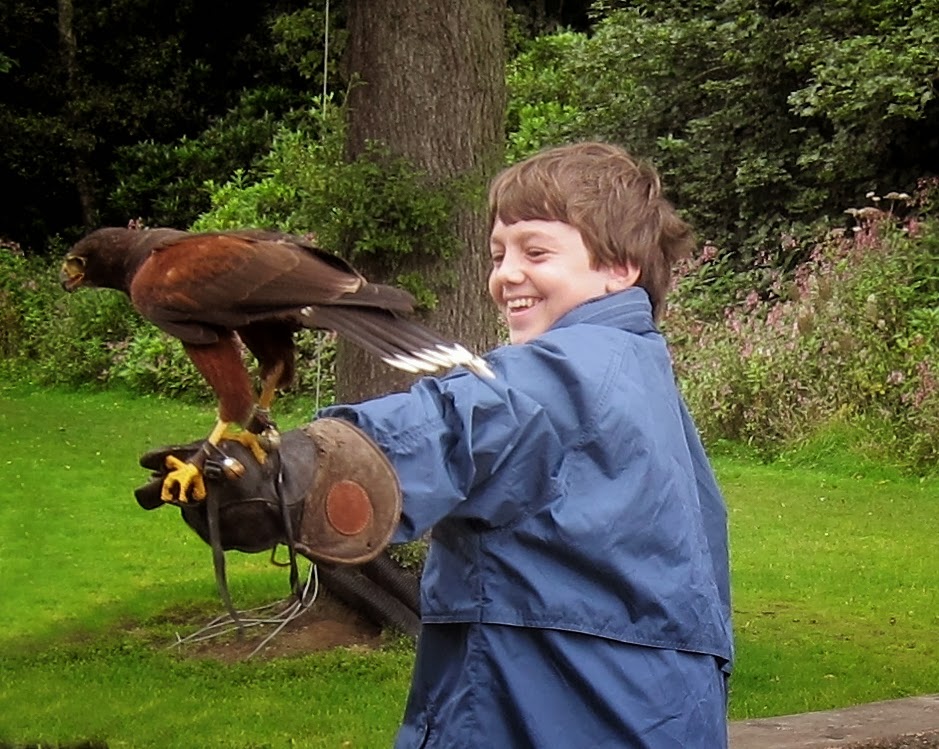 It is always unfair to choose a favourite attraction, but I did like the ominously-named Killhope.  This old lead mine is an hour’s drive from Durham through grand moorland scenery. It was surprisingly hard to tear myself away from the museum, which had a fine display of "spar boxes" - little dioramas of scenes created from fluorspar. It was a popular local craft, offering a glimpse into a little alternative world.

Also, I can't say the look of the mine appealed to me, but there was no alternative, really.    Dressed in borrowed wellies and hard hats, our party splashed down a peaty burn 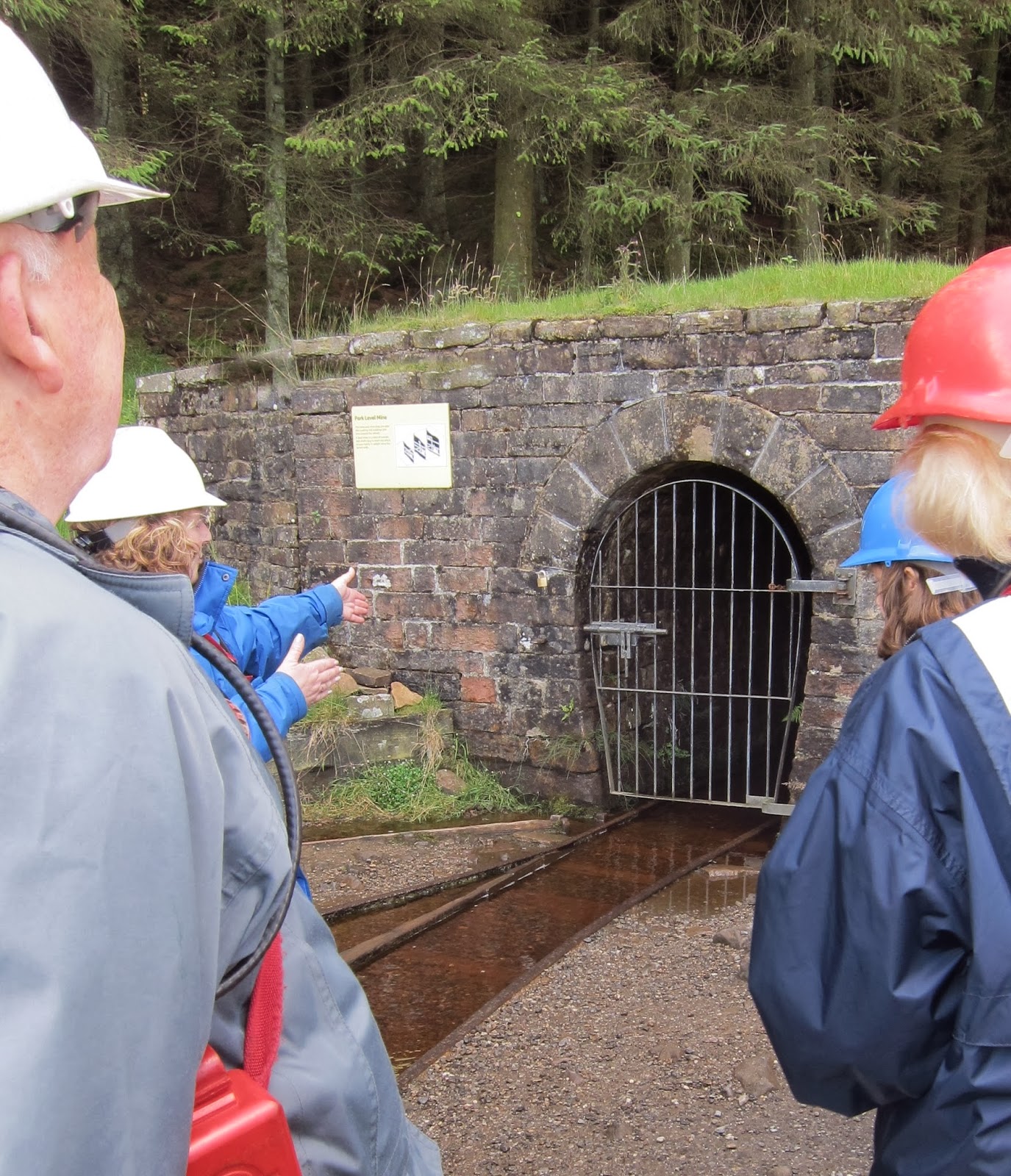 
and squeezed down a narrow, dripping tunnel into the darkness. The aim was to get a taste of what life was like for the Victorian miners who lived, and sometimes died, here.     They tunnelled in horizontally, using explosives to clear the way, then climbed upwards in darkness and dust to hack the heavy, silvery ore from vertical rock faces.  It was filthy, dangerous toil, and since they stood for hours in cold running water, it’s not surprising that so many of them got trench foot, died of tuberculosis or developed other disorders.

It was a sad place, really, but Sid found it exciting, like being in a film.  He enjoyed the candle lit atmosphere, 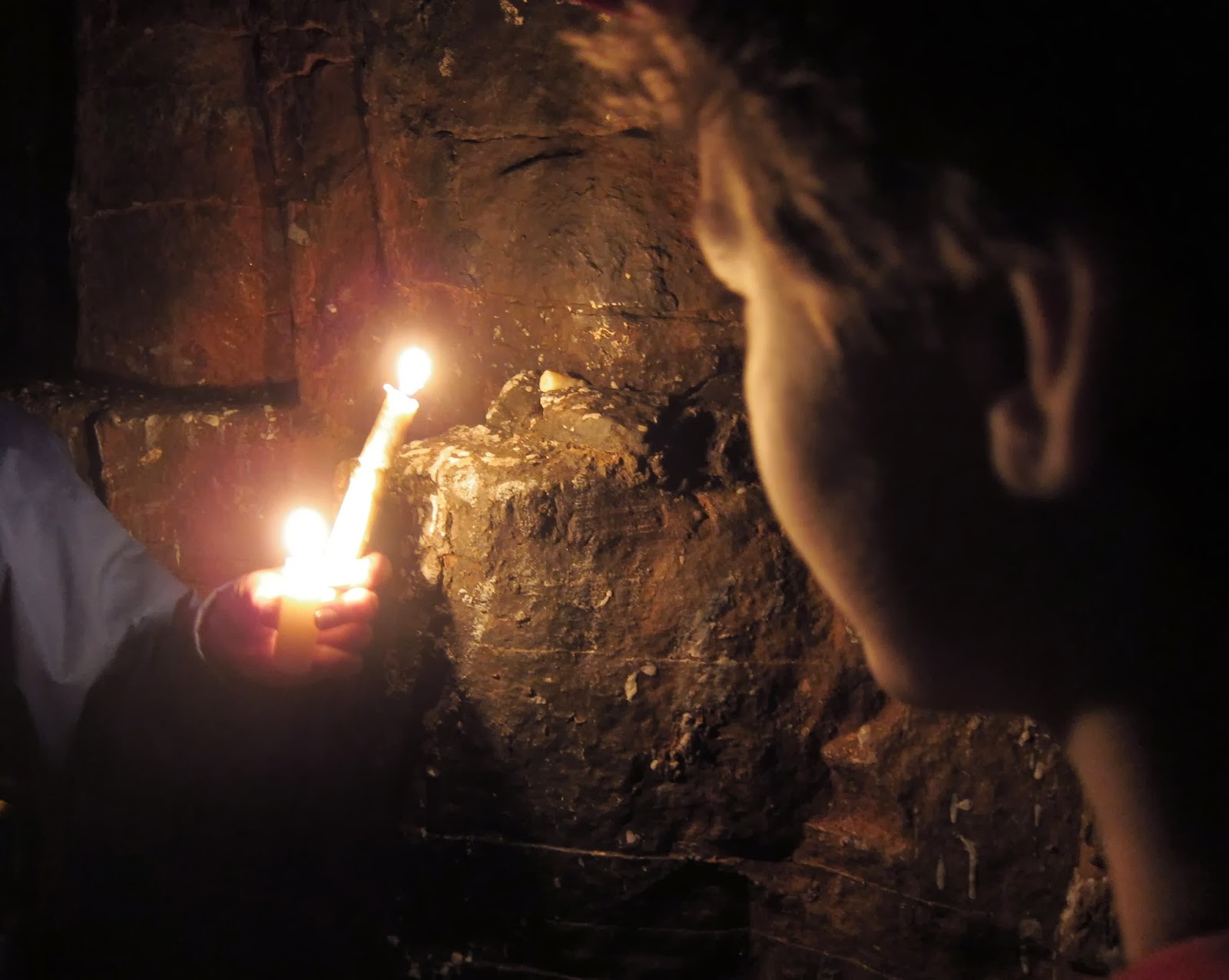 he liked making scary monster faces by shining his torch upwards on himself, and loved helping the museum volunteers “wash” the crushed ore by raking and sieving it in the stream to extract the minerals.

A hundred and fifty years ago, I said, he might have been doing it for real, twelve hours daily in all weathers.   “Oh,” he said, thoughtfully, and a slight shadow crossed his face.  But such is the cheerful optimism of youth, he did not dwell too much on it. For, with HD television and chocolate chip biscuits waiting, and a fancy breakfast in the morning, plus  the prospect of that thrilling first-class trip back to London, all was right with his world. 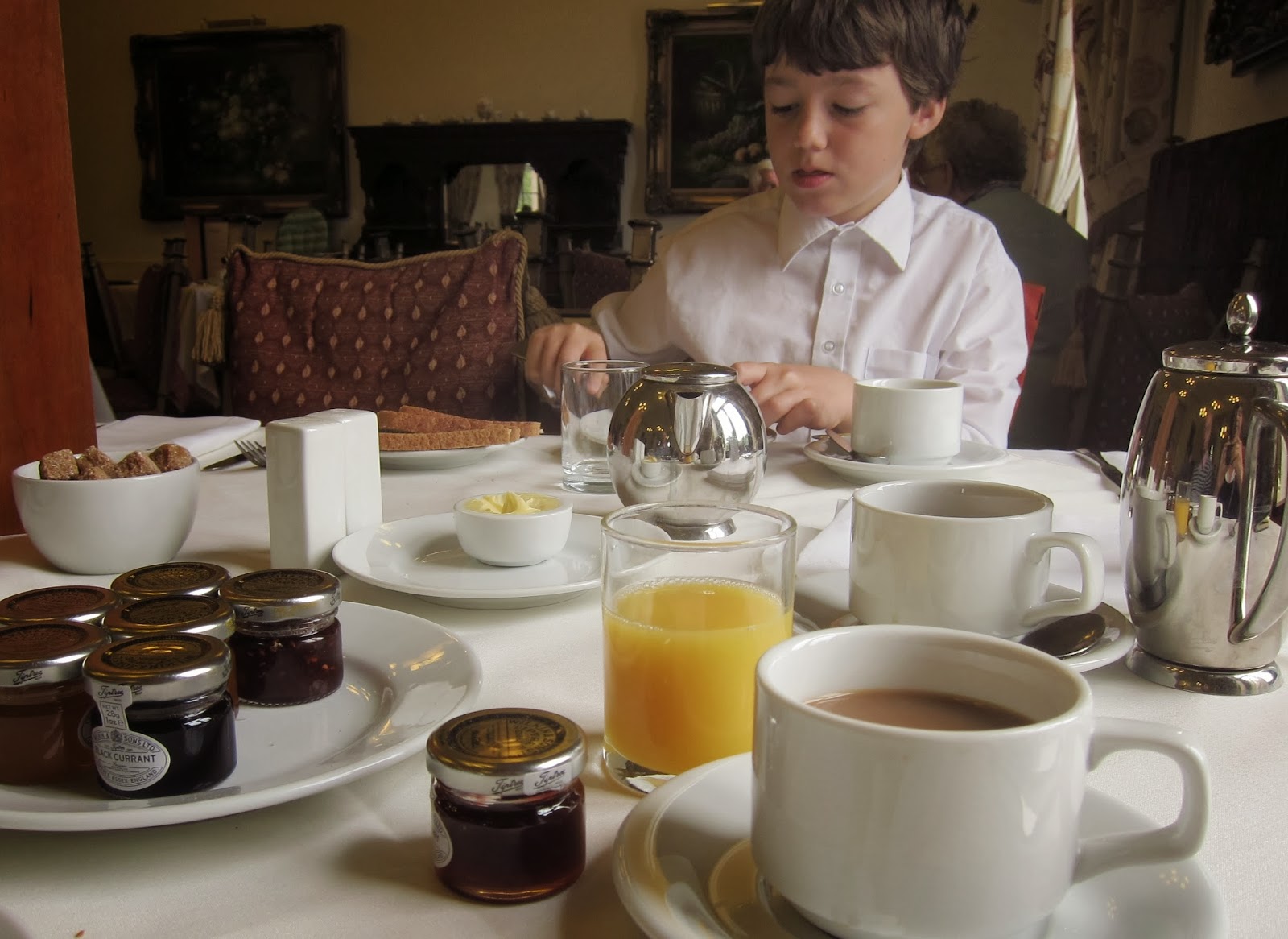