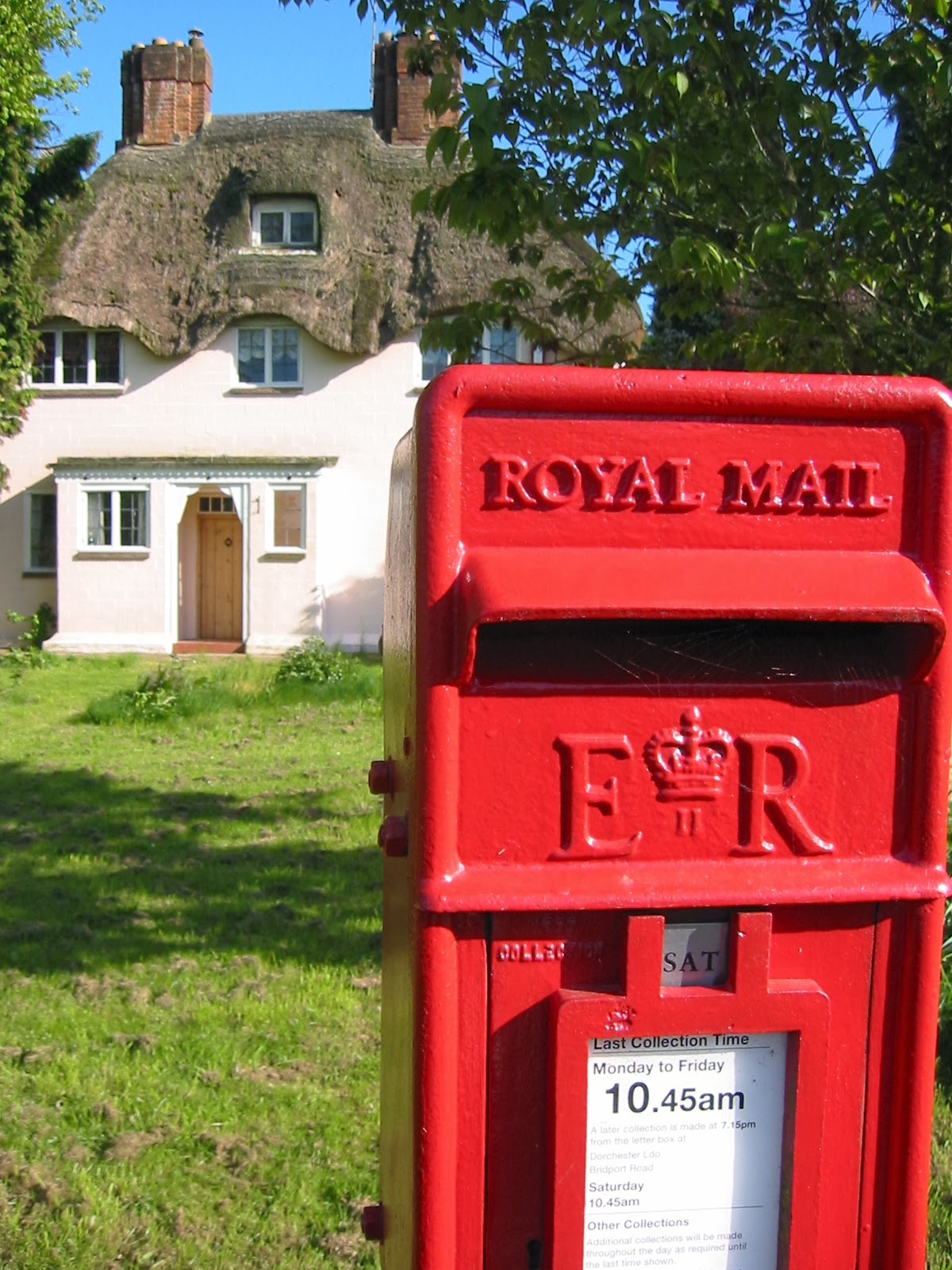 A century ago, the King’s doctor, Sir Frederick Treves, was spending his spare time tramping the tracks and lanes of his native Dorset. He was recording the “green and homely” county that he thought was the finest spot on earth, and it says something for Dorset that his book, “Highways and Byways in Dorset,” (first published in 1908) is still a useful companion when exploring this rural bit of Southwest England.

Treves has plenty of anecdotes and comments about Dorset’s towns and 150-odd villages, chuckling here at playwright Henry Fielding frittering his money in East Stour, exclaiming there at the fascinating medieval church of Gussage St. Andrew, and marvelling always at the  “love of flowers, the delight in bright blossoms, the petting of gardens” which made the cottages of Dorset such a delight. 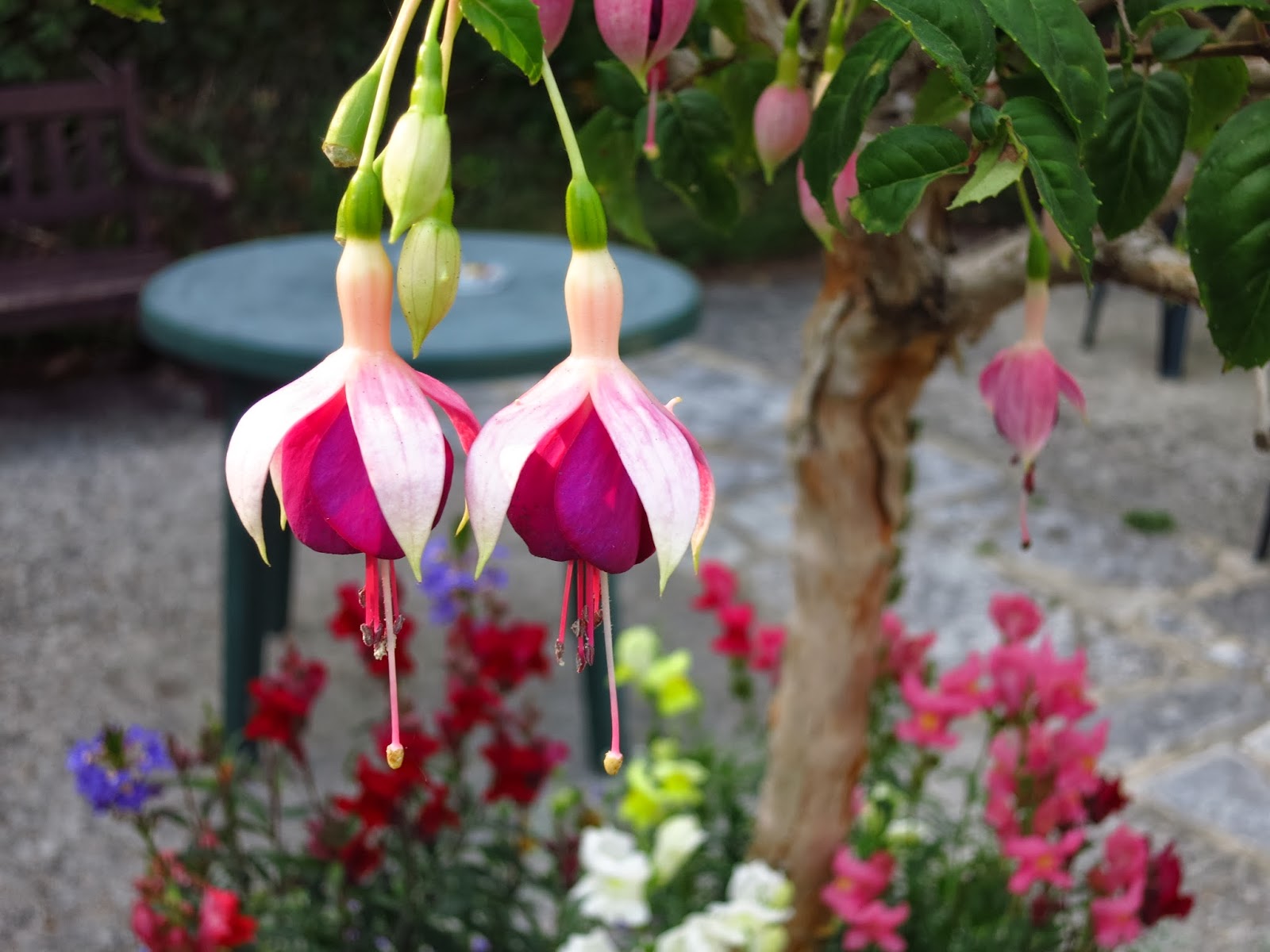 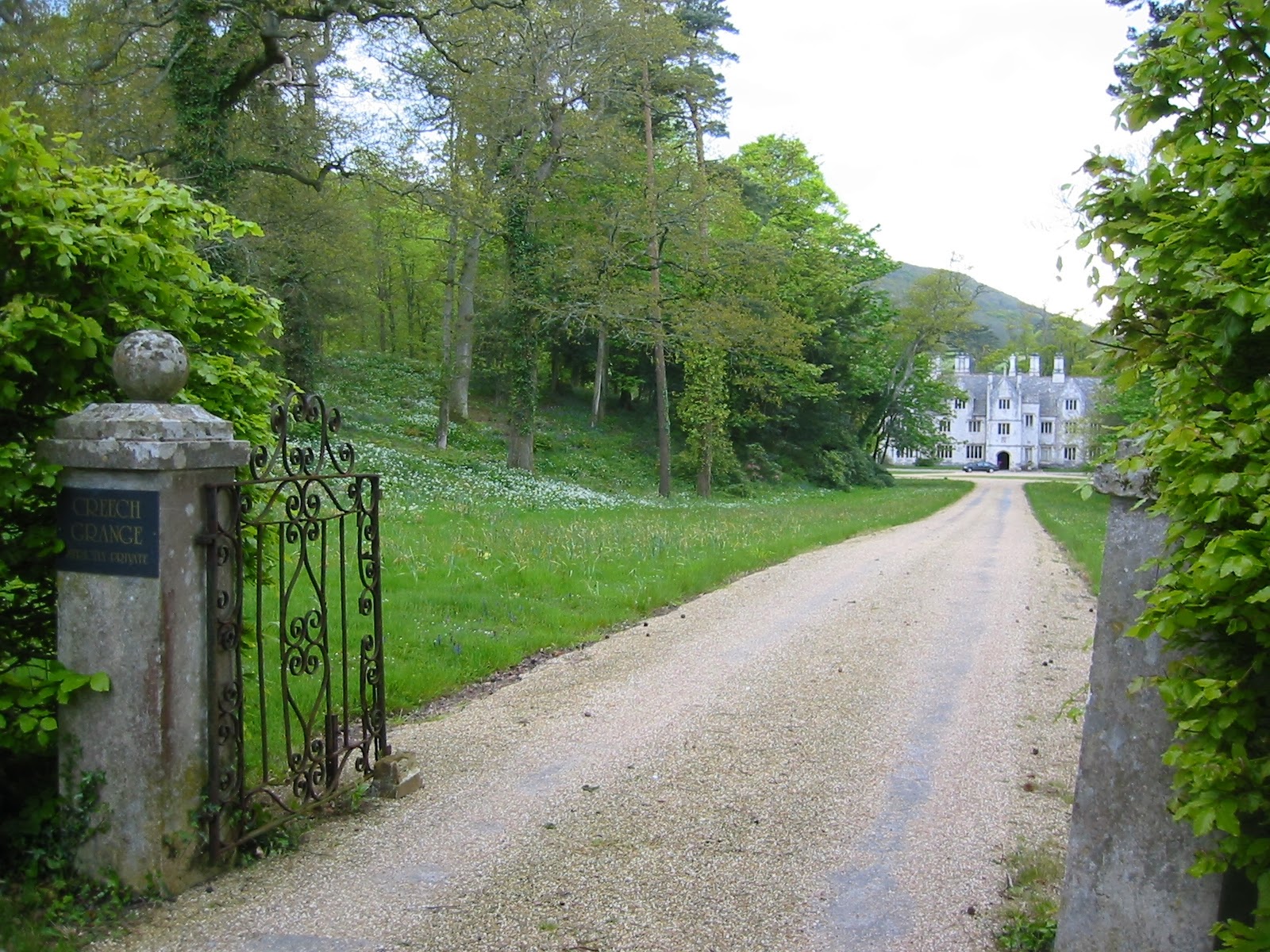 still recognisably the same landscape as that portrayed by Dorset's most famous writer, Thomas Hardy.

Thanks to the National Trust, Hardy’s secluded childhood home still survives at the bottom of a tiny lane.  The cottage is set against a backdrop of tall, dark trees, a rambling,  thatched building fronted by a large garden of traditional plants - lupins, daisies, delphiniums. Cheerful but simply furnished, the cottage was built by Hardy’s great-grandfather and breathes of the plain and earthy country life which Hardy so brilliantly re-created in his novels. 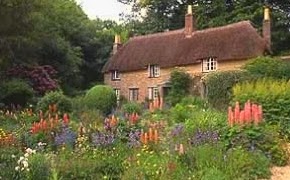 The National Trust also owns another, and very different, writer’s home nearby.  Clouds Hill, remote in woodland near Wareham, was the country bolt-hole of T.E. Lawrence, better known as Lawrence of Arabia, and author of “The Seven Pillars of Wisdom.”  Literary celebrities like Shaw, E.M. Forster and Robert Graves visited Lawrence there, and perhaps they, like modern visitors, were struck by his austere lifestyle and amused by the Greek words he had carved above the lintel: “Ou Phrontis” (“Why worry?”).

Around ten miles from Clouds Hill is Dorchester, the county town of Dorset. Its built history goes back for well over two thousand years, so in just a few hours it’s possible to stroll across the huge, pre-Christian hill fort of Maiden Castle, visit the remains of a large and rather stylish Roman town house, and see the courtroom where cruel Judge Jeffreys held his notorious Bloody Assizes in 1685. 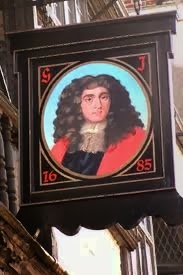 But Dorchester is not backward-looking, for it is also the site of a unique architectural experiment by Prince Charles.   Exasperated at soulless housing developments, the Prince created an innovative “traditional” village,  Poundbury, at Dorchester.  Pedestrian-oriented, eco-friendly, Poundbury is entirely modern but feels and looks historical. It’s been so popular that many local builders have copied it – so some lovely thatched cottages in nearby villages may not be as old as they look – something that is not always particularly popular with the locals, who prefer houses to be houses, not something off a chocolate box. 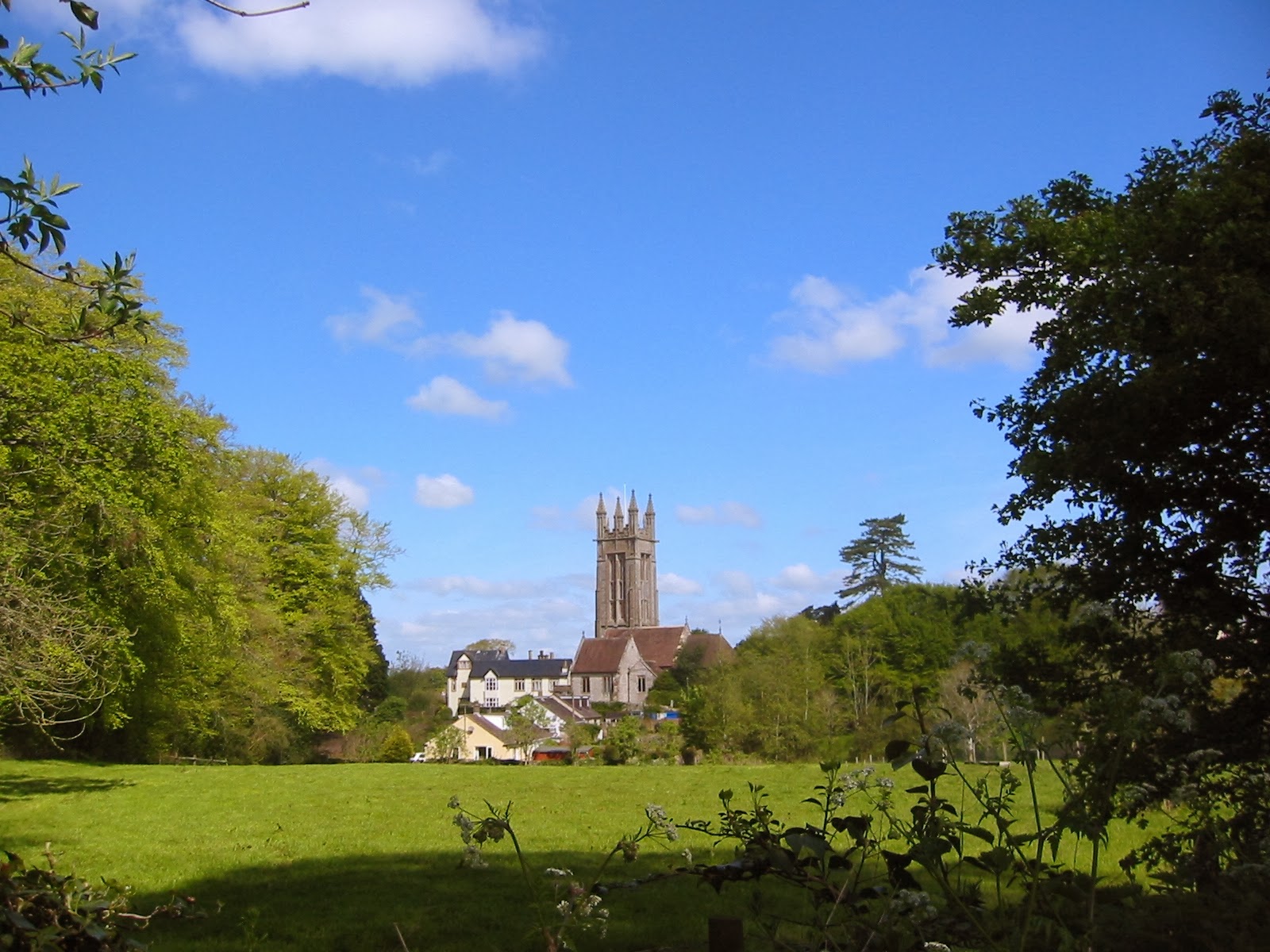 The small town of Cerne Abbas is particularly suited to visiting with Dr. Treves’ book to hand. He lovingly describes its quaintness and charm, yet regrets its sad decline, with grass growing in the street, historic cottages boarded up, and even the famous Cerne Giant, carved into the hillside, neglected to the point of invisibility.

Nobody is quite sure if the naked, club-wielding Giant is a pagan fertility symbol or the work of naughty 17th century iconoclasts, but possibly one reason for Cerne’s decline a hundred years ago was that the prudish Victorians perhaps preferred him to be discreetly covered with grass. In World War Two, also,  he was disguised to stop the enemy using him as a landmark. But that was then.  Now, stretching for 180 feet across the green hillside, the Giant is visible for miles around, bright and trim, and picture-postcard Cerne has been voted one of England’s most desirable villages in which to live. 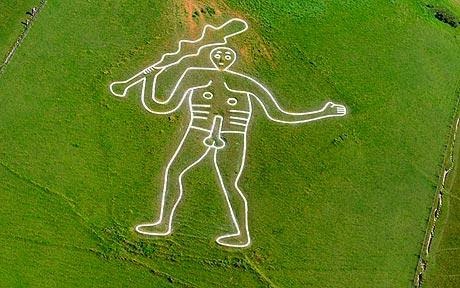 A short drive from Cerne,  15th century Athelhampton House stands in one of England’s great gardens, with features that include twelve yew pyramids, a 16th century dovecote and an ornamental canal. The owners are particularly proud of Athelhampton’s connection with the gifted Russian artist Marevna, intimate of Diego Rivera and friend of Picasso, Braque and Matisse, and an art gallery of her work gives an unexpected slant on this historic and atmospheric house. 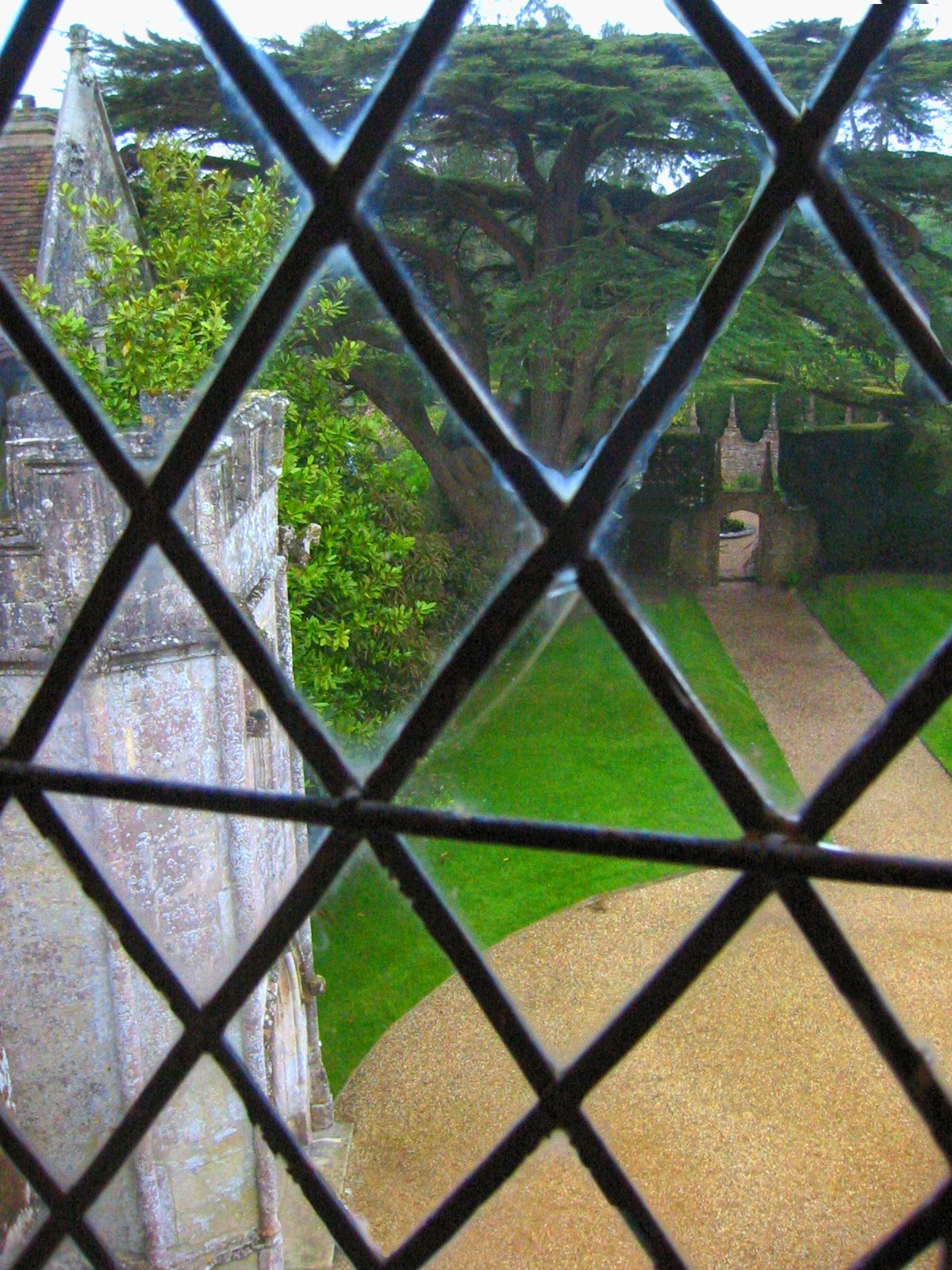 There is more amazing art in another of Dorset’s fine mansions, the National Trust’s  Kingston Lacy, near Wimborne.  This enormous house contains a collection of works by Murillo, displayed in a room hung with expensive Spanish gilded leather, as well as paintings by Van Dyck, Titian and Breughel. 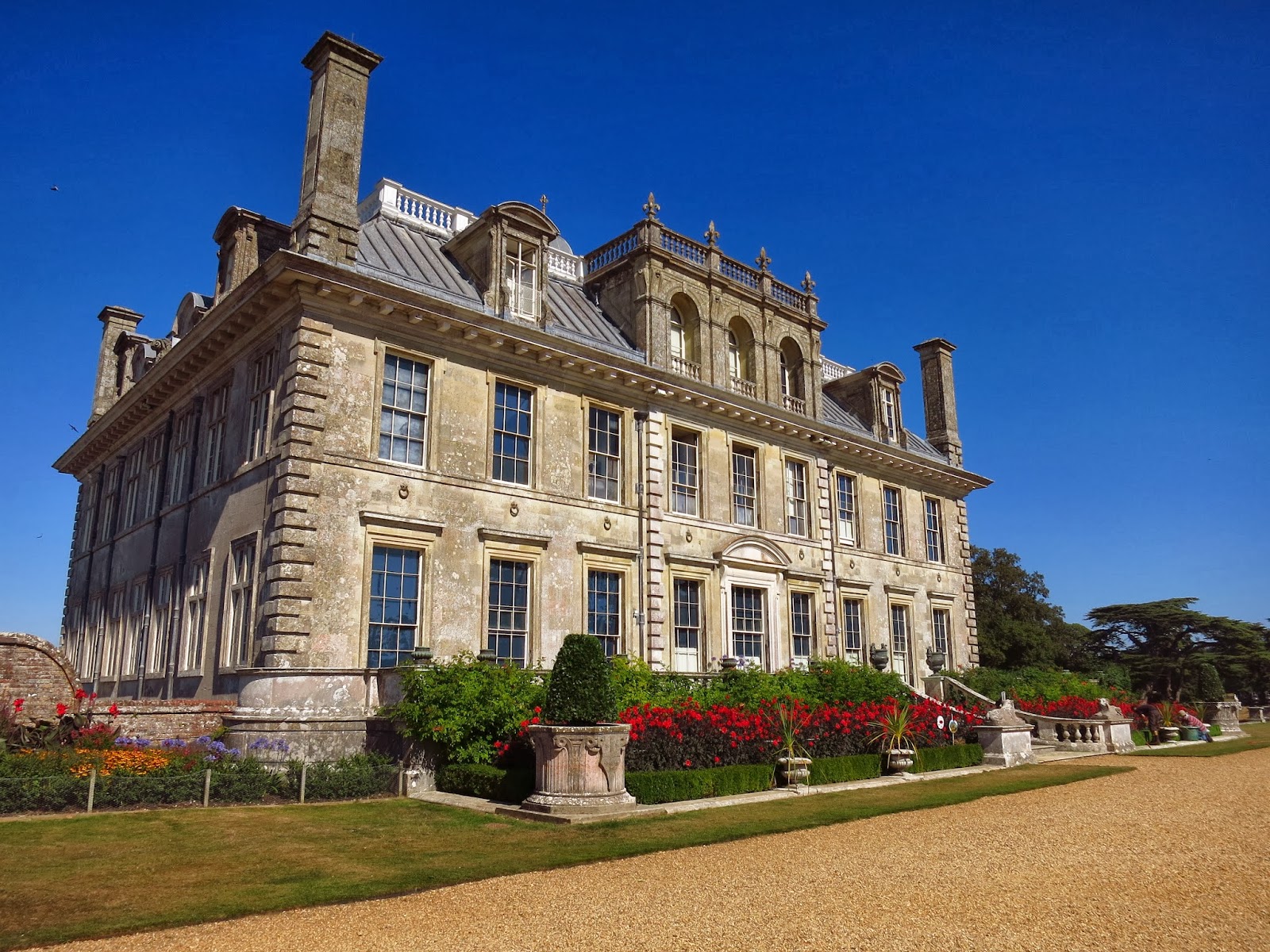 The Bankes family, whose ancestral home this is, previously lived at another of Dorset’s landmarks, Corfe Castle.  Now a dramatic ruin, visible for miles around, 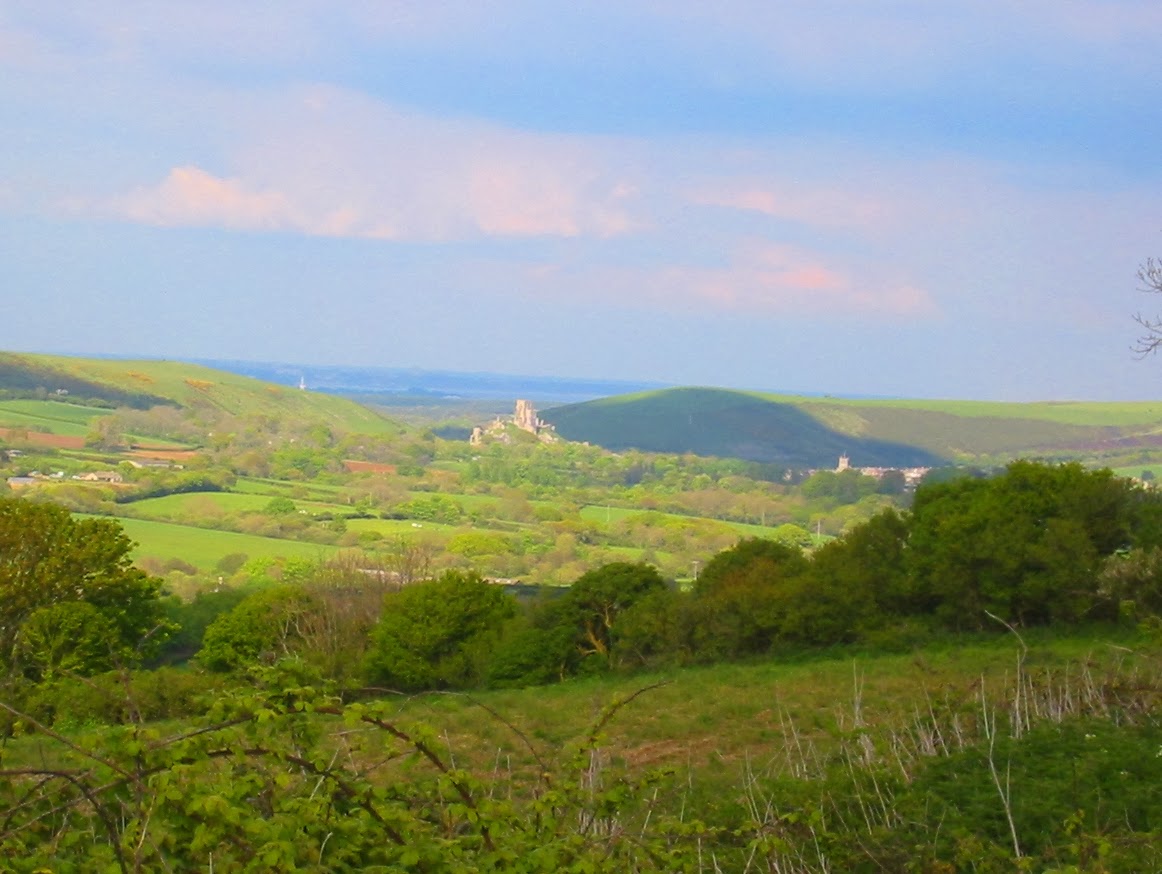 the castle dates back nearly 1000 years, and once belonged to the dancing master of Queen Elizabeth I.  It was sacked in 1643, and never rebuilt, and it’s now a popular (and very visible) destination for ramblers in the surrounding countryside. It’s also popular with fans of the children’s novelist Enid Blyton, whose “Famous Five” books are partly inspired by it. 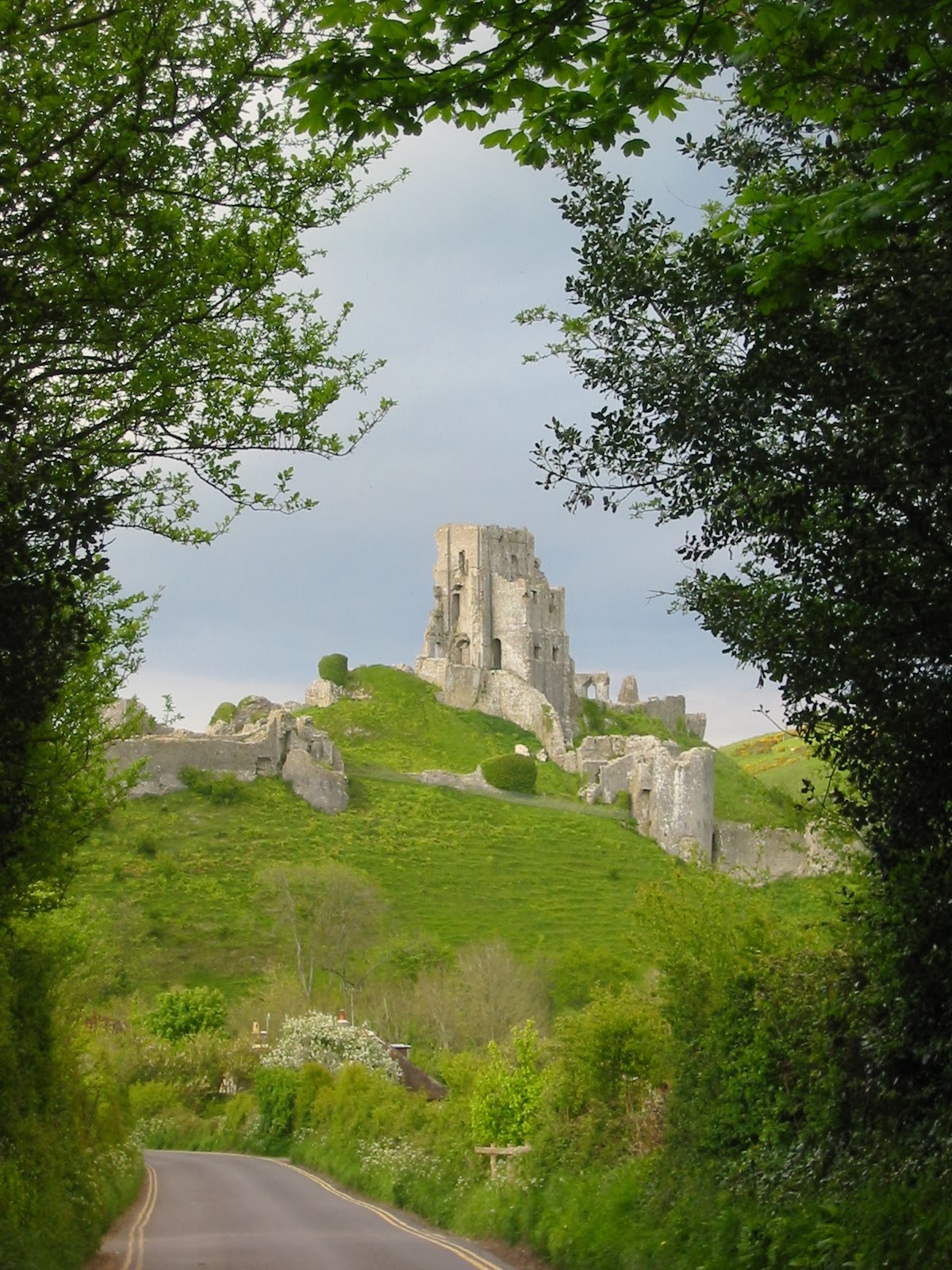 Corfe Castle village, which has grown up round the castle mound, is one of the stops on the private steam line which runs between Swanage and Wareham, near Poole.  Volunteers operate the trains and equipment, and serve home-made teas in restored buffet cars, and a trip on one of its trains is really a very pleasant way to see this part of South Dorset. 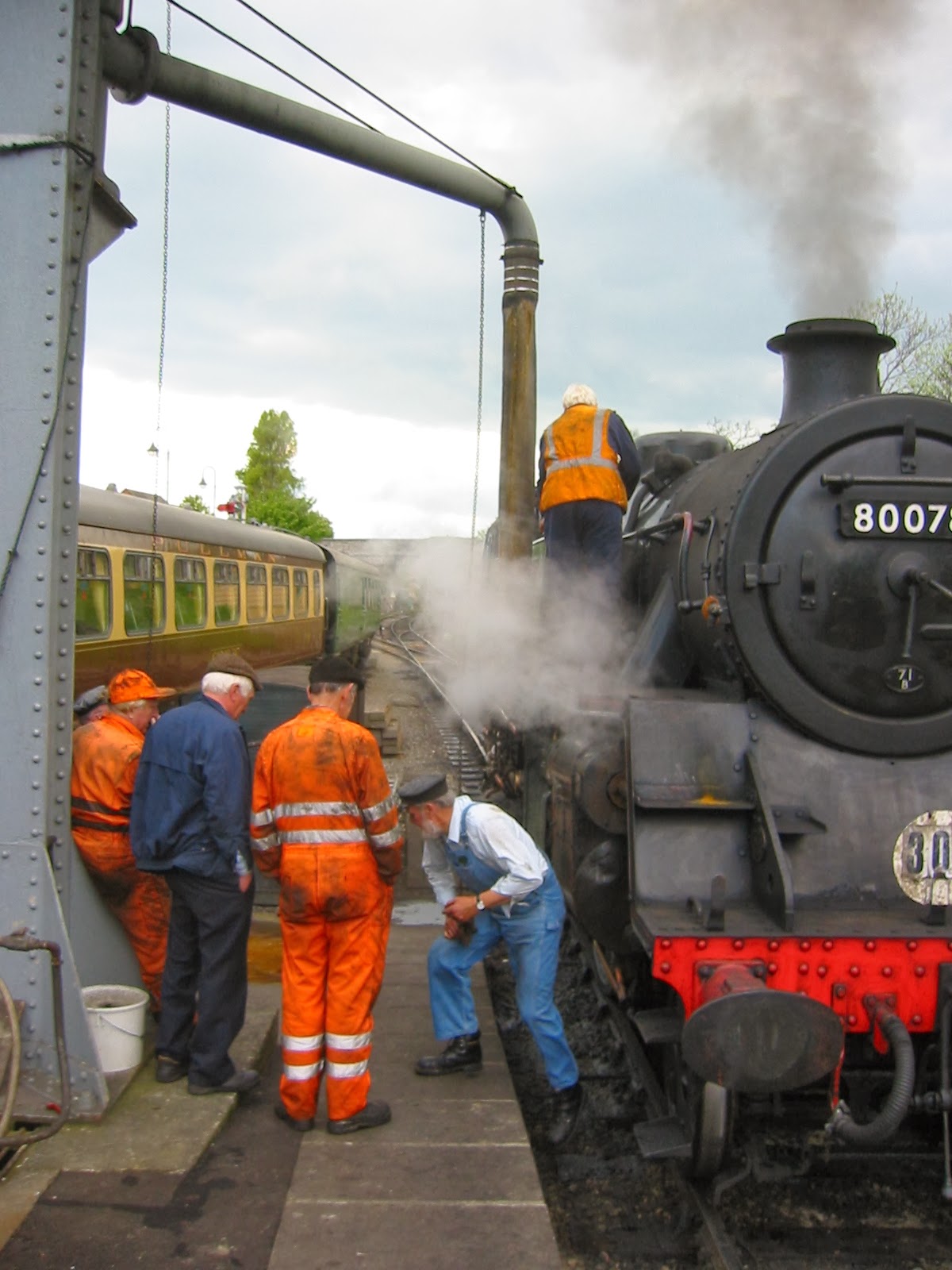 The railway’s attractive Swanage terminus is almost within sight of the beach; in this case a traditional seaside one.  Dorset has its share of bucket-and-spade resorts, but its coastline is extremely varied. Around seventy miles is in the Jurassic Coast World Heritage site, covering 185 million years of earth’s history, but the whole coastline stretches from lively Bournemouth in the East to past the fossil-hunter’s paradise of Lyme Regis in the West.

Lyme Regis was the home of Victorian fossil hunter Mary Anning, featured in Tracy Chevalier’s best-selling “Remarkable Creatures.”  The town offers fossil walks, fossil shops, even fossil-inspired crafts. It’s also the location for the book and movie of John Fowles’ “The French Lieutenant’s Woman.” But if you’re not in the mood for stories, take a walk along the historic Cobb and visit the sea mice in the intriguing little Aquarium, or visit the town’s still-operational 600-year-old watermill, buy some home-made bread, have tea or admire some art.

Bournemouth, at the eastern end of the county, has pine trees, parks and Winter Gardens, and was originally a resort for the rich; Hardy described it as “a Mediterranean lounging place on the English Channel.”  Although attractive, the town now caters for all kinds of visitors, but the Russell-Cotes art gallery whose Victorian art collection is set within the grand mansion of East Cliff Hall, gives a flavour of this wealthy and rather indolent side to Bournemouth. 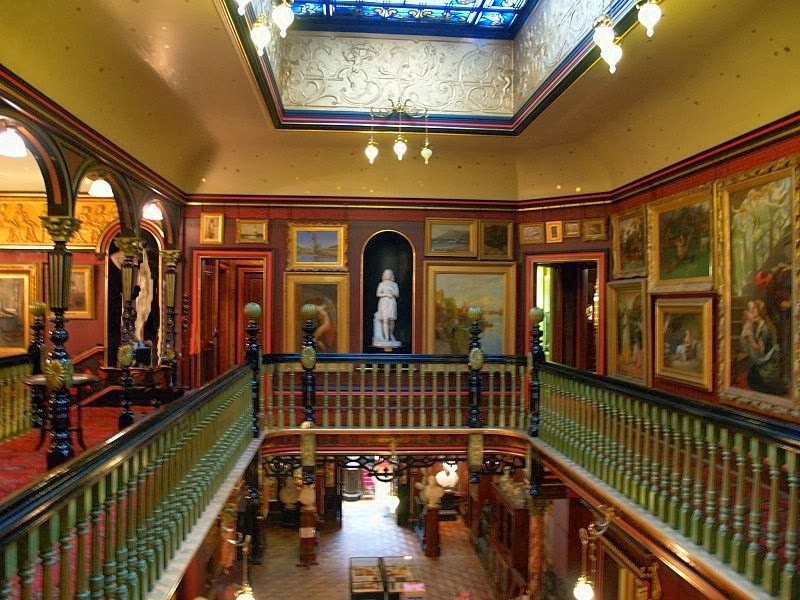 Neighbouring Poole is the starting point for the ferry that travels every half-hour to the hidden treasure of Brownsea Island.  Originally owned by monks, Brownsea became a pirate hideout, and then a grand country estate, and Boy Scouts’ founder Major-General Robert Baden-Powell organised an experimental campsite there. After purchase by a wealthy recluse, it became a wilderness and thereby escaped development in the early twentieth century. It is now a National Trust nature reserve, and one of the only places remaining where the native red squirrel - “Squirrel Nutkin” – survives.

But you don’t need a nature reserve to see marvellous natural sights. In May, the woodlands around Milton Abbas shimmer azure with wild bluebells, 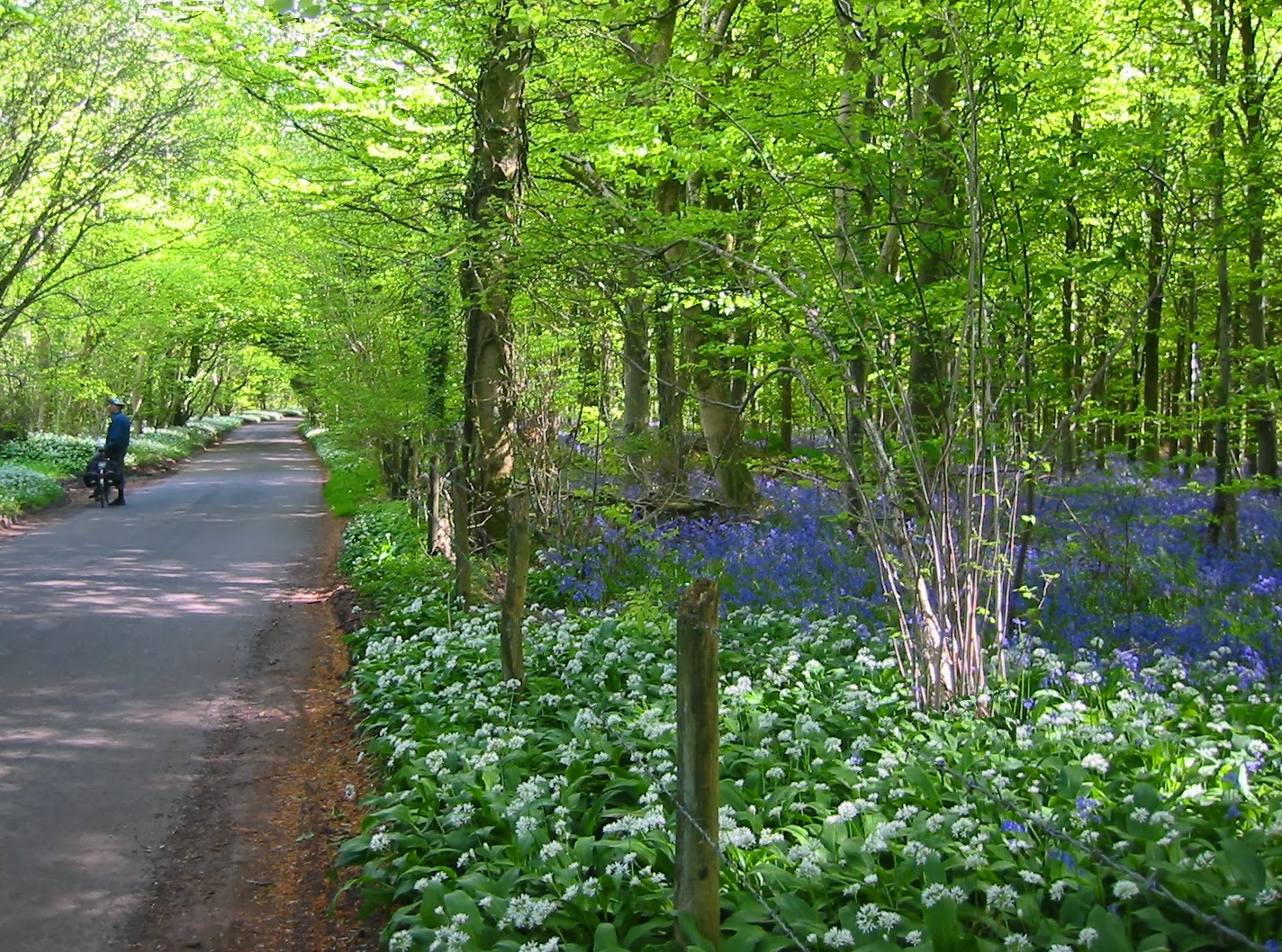 and this is a very good time of year to visit this unusual thatched village which was created in 1780 by the local squire who wanted to improve the view – and he did it with the aid of one of England’s greatest ever landscape designers, Capability Brown. 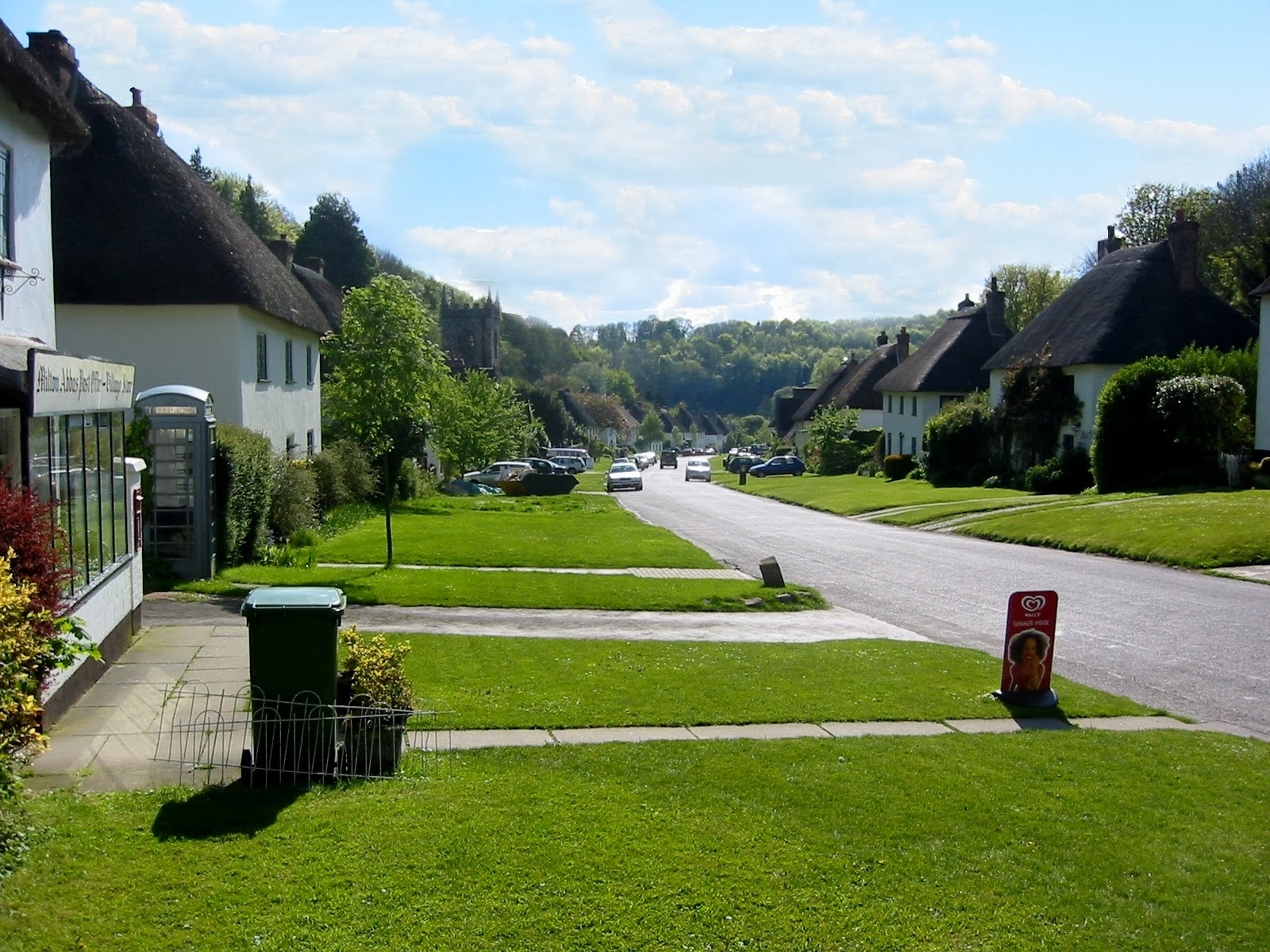 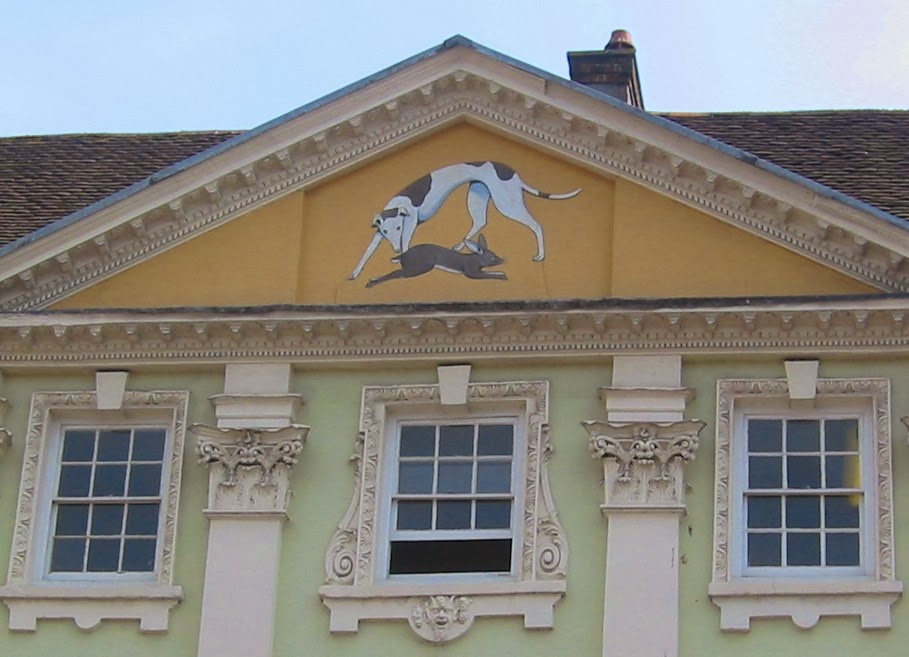 and biennial Georgian Fayre, the eerie ghost village of Tyneham, the historic city of Sherborne with its fine abbey, or Wimborne Minster’s astronomical clock and chained library. But Dr. Treves took nearly four hundred pages for his book, and he still only skimmed the surface of what he called this “varied place of moods and changes that knows no monotony.”

And there is something that he left out, too. He doesn’t mention Dorset Apple Cake, that local delicacy containing as much apple as cake. They have a highly recommended version in the pretty schoolhouse tearooms at Moreton, recently voted Dorset’s top teashop. But don’t confine yourself to apple-cake when you could also have potted Portland crab, local venison, or chestnuts, meringues and cream. You do need a reward for hiking up and down all those hills. 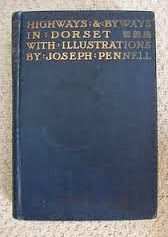 After tea in Moreton, go and admire the many huge engraved windows by Lawrence Whistler in Moreton Church. http://www.moretondorset.co.uk/moreton/st_nicholas_church.php

The Priest's House at 27 High Street, Wimborne Minster, is another favourite spot for tea. Explore the fascinating old shop and house and enjoy the large gardens, immaculately maintained by local volunteers. http://www.priest-house.co.uk/ Tel 01202 882533