Not much of a theme to the last couple of weeks for me, just scraps of this and that.  If you are in Britain, I hope you enjoyed the hot weather - or at least weren't too uncomfortable in it.    We have a mobile air conditioning unit which can sit unused in the cupboard from one year's end to the next, but just occasionally, on a day like today, it's worth its weight in gold. I'll try and remember how much I appreciated it, next time I find myself moaning some chilly day about it cluttering up the cupboard under the stairs.

A few days ago we had a visitor from the balcony.  This pigeon has been patrolling around for a while waiting for seeds to fall from the bird feeder, and took the chance to explore somewhere new - our dining room.  It was a little puzzled at the unfamiliar surroundings but soon settled on top of a book case, well out of reach.  It seemed to have a high boredom threshhold and after an hour or so of waiting for it to do something, I put some food outside, opened the door and left the room. When I returned a few minutes later it had decided to go out and eat the food.  There was a little bird poo to clear but not much.  I'm hoping it's not got the idea that flying inside our house ensures you get fed... so I'm keeping the door shut for a few days, just in case. 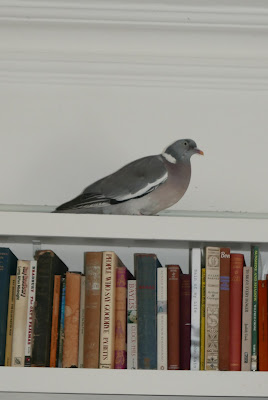 During the hot spell I felt glad I'd made a mini (very mini) pond which I put in an isolated corner.  It's basically just an extra large plant trough sunk in the earth, with a few dead branches around it, a large rock and a few inches of pebbles inside, and a bit of water weed.  I'm assuming that creatures have been drinking from it - although how wild animals ever find water is a mystery to me.  It is also popular with small insects, and since there are swifts around, which feed on insects, I'm happy with that.  It's sited near a beehive, and maybe bees drink too. Who knows? I like to feel I'm doing my bit to keep the wheel of nature turning anyhow! 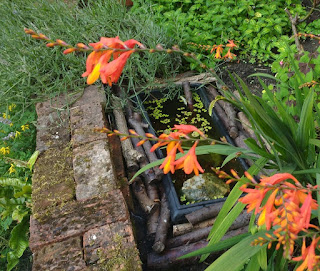 I happened to spot a large old scrapbook in a junkshop. I like to buy scrapbooks if they are not expensive, and this one wasn't.  My criterion is whether I could sell it for more on eBay if I get fed up of it, and I am sure I could. I've really enjoyed looking through it.

This is my favourite page.  The fashions are from around 1910, and it looks such a delightful scene, doesn't it? I think probably somewhere on the Italian coast.  I've been reading "My Bolivian Aunt" by designer and photographer Cecil Beaton, in which he describes how his aunt had lots of glamorous women friends around this period, 1910, whose clothes made such a huge impression on him when he was small that they influenced his style forever after. 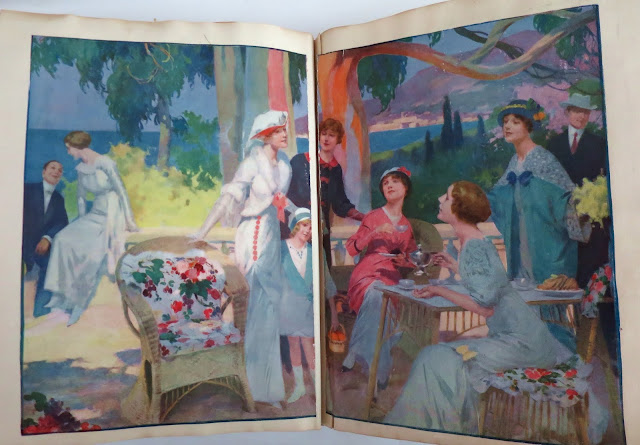 The scrapbook has quite a lot of variety.  Whoever owned it was fond of brightly coloured die-cut scraps depicting comic characters, flowers and butterflies, dressed up animals, and people in foreign costumes - some of the nationalities being rather hard to guess in my opinion! 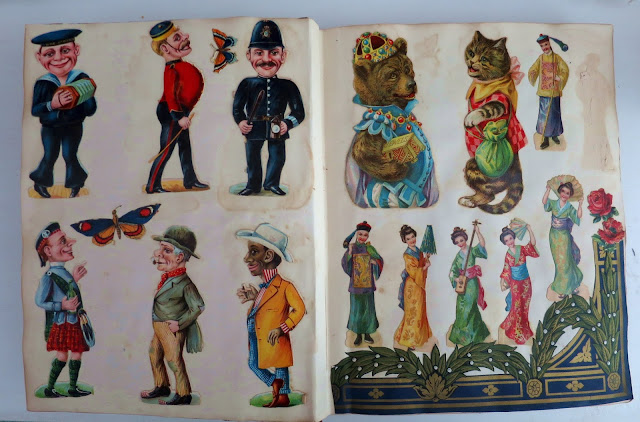 I went for a movie with a friend to JW3, a Jewish cultural centre which runs all kinds of interesting events. We had a cup of coffee and I snapped this through the window - they've created a kids  "beach" with a paddling pool, sand, and a backdrop of Eliat, Israel. In winter they have an icerink in the space and it's fun to sit and watch everyone playing. I don't know why some of the people seem to have haloes round them, some polarization in the window glass maybe. 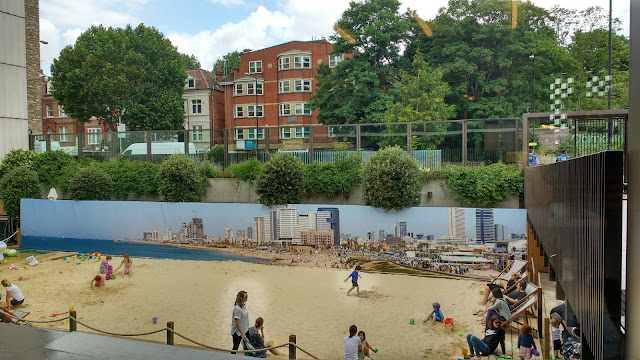 And here are the kids having races at  our annual local garden party.  This party has been going as long as living memory. When we first came here old folk were talking about how it had been in the 1930s.  Every year it is basically the same, with variations depending on what people feel like doing. And that is, when you think of it, amazing, since the area has changed so much.  When we came, the area was very run down, full of bedsitters and squats, and the housing was collapsing, literally collapsing.  Now it is considered quite desirable, but people still keep to the same routine for this party.

By day, it's like a fete, with stalls, BBQ, tombola and organised races, and several tugs of war.  In the evenings people come out weather permitting with a bit of a picnic or wine, and an 89 year old neighbour and his excellent jazz band perform (unamplified thank goodness) until about 10 PM.    Everyone relaxes.  The weather was okay this year, but when it rains they sit under an awning.     I think the pictures below are of the egg and spoon race. 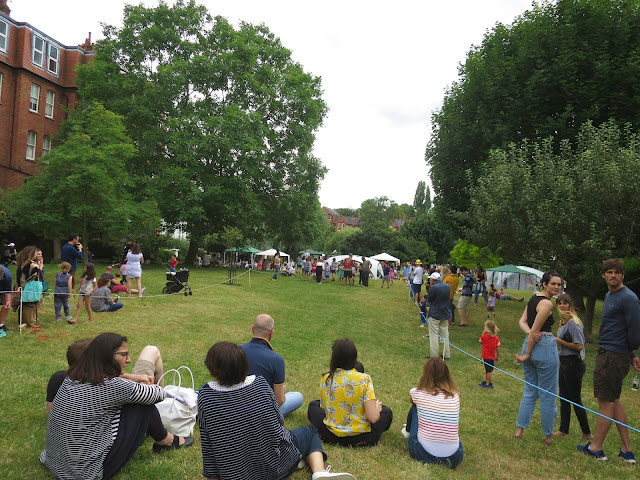 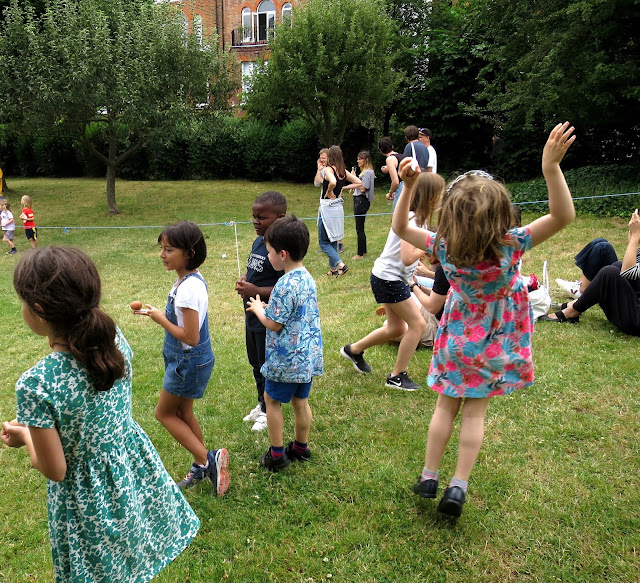 One elderly neighbour who loves cats has been producing artfully designed cat cakes for many years. Each year they are a bit different. Here's this year's design. 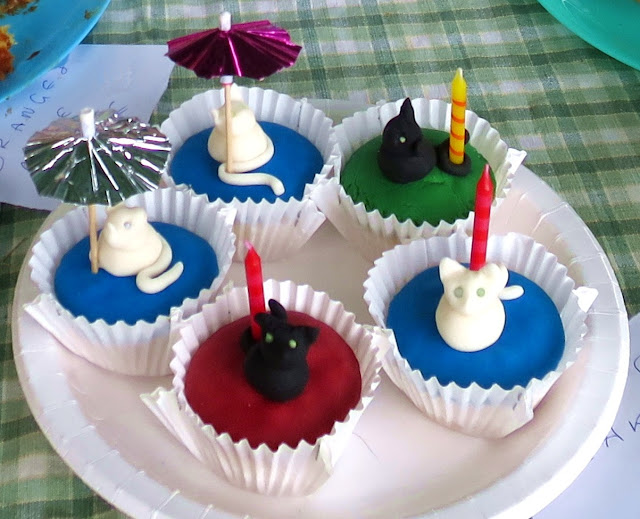 It feels good to keep up a tradition, there are not enough traditions around.

I met an old school friend a couple of days ago. It was blistering hot but the Royal Academy was a reasonable temperature and we saw an exhibition of a French fin-de-siècle artist called Félix Vallotton.  Some of his work was photographically naturalistic, some was black and white prints and there were also a few surrealistic pictures, like this one.   The subtitle of the exhibition was "Painter of Disquiet" and that about summed him up for me. I felt somehow uncomfortable with his pictures, he was very talented but I wasn't sure what he was trying to convey. 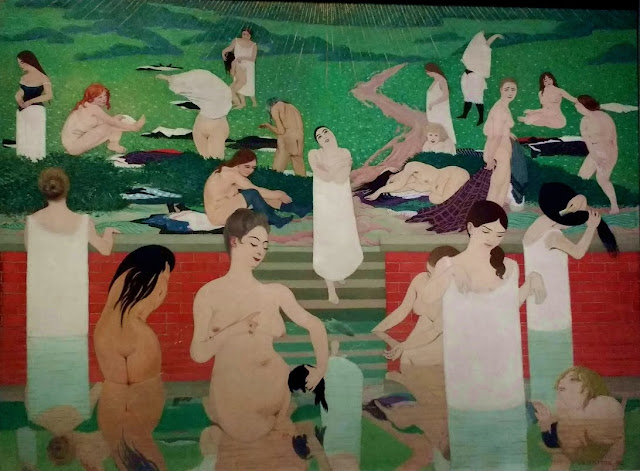 Still, it was nice to see my friend and catch up.  And I think that's about all I have done, apart from working on the book, babysitting, and dealing with a few rather difficult incidents, actually.  And the weather is  set to cool down tomorrow,  which is good.  Someone is coming over that we haven't seen for 20 years, and I would rather like to cook her a meal without giving everyone heatstroke!