As I started to write this post about the last week or two, I realised that a lot of the things I was writing about began with B 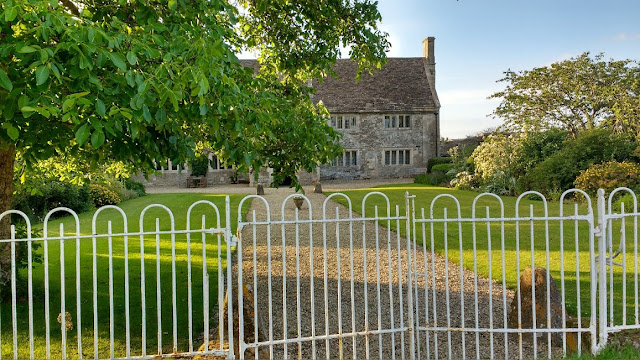 This is where stayed. It's a Bed-and-Breakfast called Seymours Court, a farm on the Somerset-Wiltshire border, not far from Bath.

It looks very grand, and in some ways it is - it's thought to have been a hunting lodge for the family of the man who married Henry VIII's final wife, Catherine Parr, after Henry died.  It seems to have been let out as a farm when hunting lodges went out of fashion, and it has been a farmhouse for five centuries. Personally, I think there might be more to it than that - any old house known as a "Court" often really was one, where local disputes were settled.  But anyway, because it is a farm and not a stately home, it's fairly simple and old fashioned inside, and the present tenants have some very old furniture which was probably in the house for generations.

The front door is magnificent, made of oak, and with a "lock" that is extremely effective. Here is the farmer's wife, Jane, showing it to me - it's a gigantic oak Bar which is pulled out at night. When this bar is extended fully, the door is as immovable as a stone! 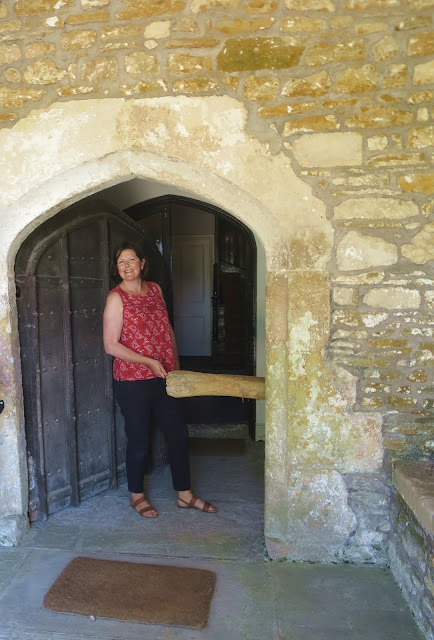 They only have one b&b room, which is the one on the top right. So that's where we were.  Very peaceful, very nice hosts and great breakfasts.

I was doing a bit of work in Bath.  I've been there before  (though not for years) and didn't get much time to look around before I had to continue, but here are some pictures that T. took of the restored  Baths, which were built in Roman times.  Amazing collection of ponds and pools in the middle of the city, lots of Roman remains and later medieval additions.  And a rather cool tourist, I thought. 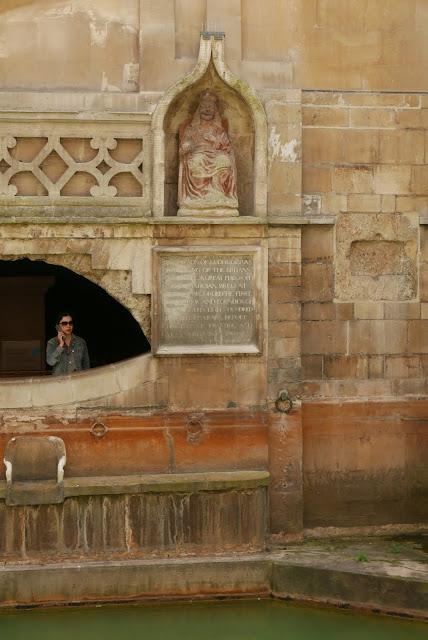 It's strange that people still keep up the custom of throwing coins in water, which originated in the pagan idea of placating water spirits. The Roman Baths were certainly considered to be magical by those who used them, and among the exhibits on display are visitors' written-out prayers for help, or curses on thieves or crooks, 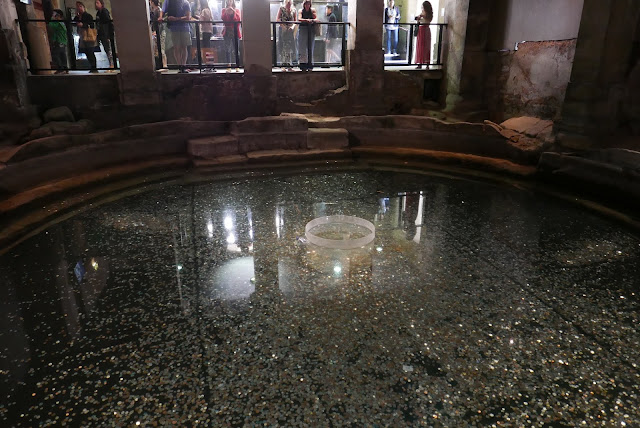 And here is the gilded head of Minerva, to whom the people used to pray.  It was found chucked in a pond and forgotten about but is very nicely displayed now. 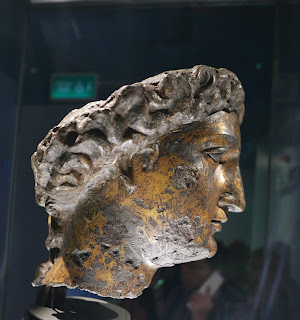 Bath Abbey was being renovated, so was noisy and full of builders, but I liked this reflection of windows and stone tracery.... 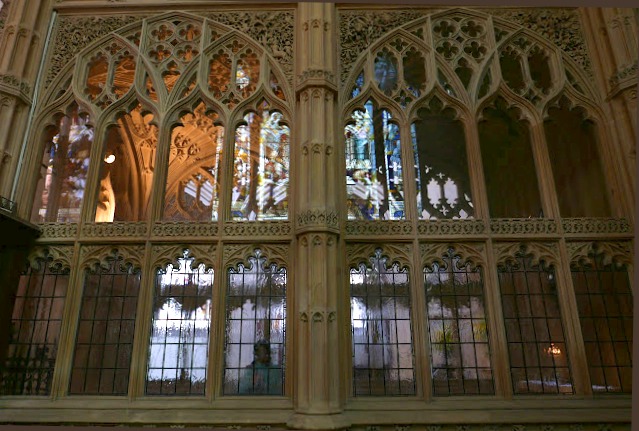 And outside, the 16th century sculpture of angels climbing a ladder to heaven was apparently based on a dream of one of the  Bishops of Bath & Wells.  Or so they say....  I think it's a wonderful image to have on a church! 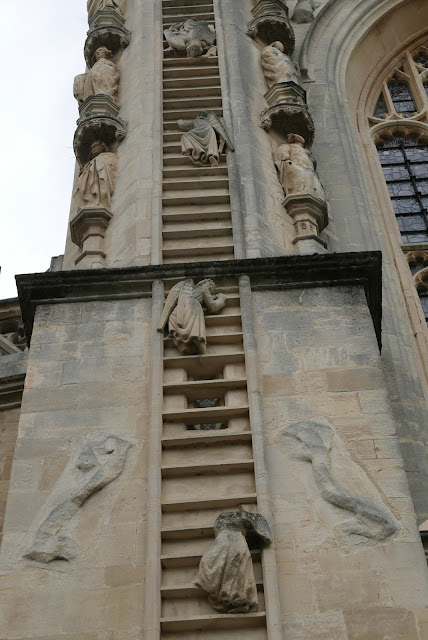 We took the chance to have some walks - luckily the weather was really good, not too hot but sunny and bright.  I've been getting a bit obsessed with spotting Butterflies, so here are a couple I snapped although there really were clouds of them around, a marvellous sight. I'm not very knowledgable so forgive me if the names are wrong but I think this delicately coloured butterfly is a Painted Lady... 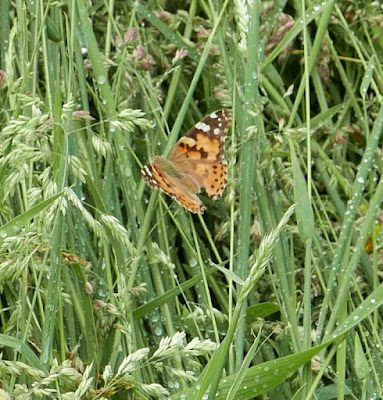 and the much brighter Comma, which is brilliant orange 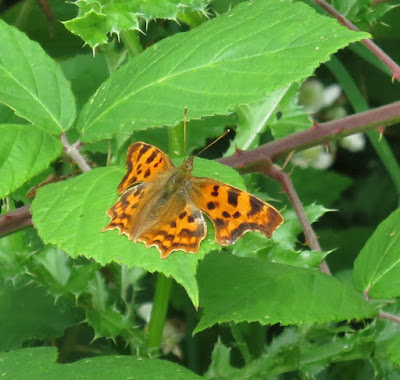 And this is my favourite, although it's not a very good picture, or shall we call it an "action shot"?   I was photographing a Small White on a nettle when all of a sudden a Marbled White flew down and landed right on top of it. Butterfly confusion, and they both fluttered off in a hurry. 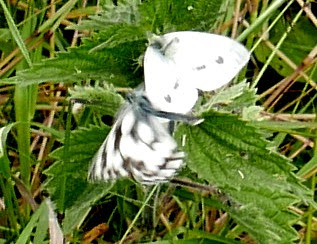 The area is very pretty round there, some of it is indeed what we used to call "chocolate-boxy" which I suppose relates to the days when boxes of chocolates and sweets often had pictures of country cottages on them.  I had to take a picture of this Blossom beneath a window. 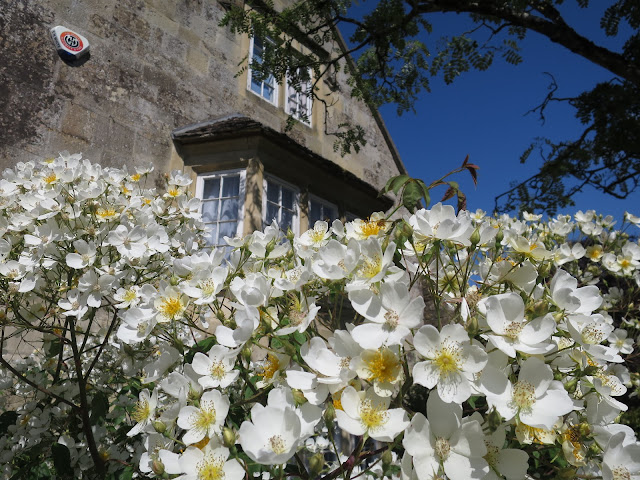 and a Blue-eyed cat which was one of two very elegant cats patrolling around Iford Gardens, an Italianate garden deep in the countryside. 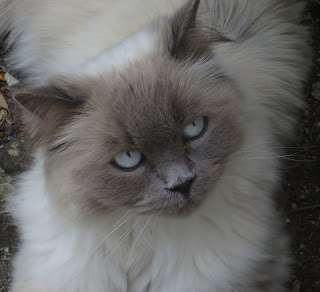 Here is Iford Manor, and you might just be able to spot Britannia on the Bridge. 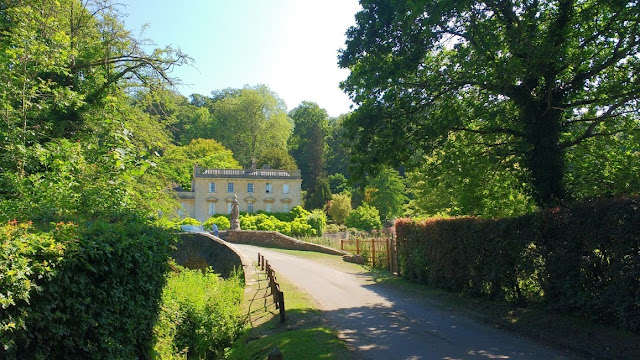 It's a medieval bridge so most odd to see what seems like an 18th century statue on it, her helmet on her head and her shield by her side, guarding the charming little river that flows by the house. 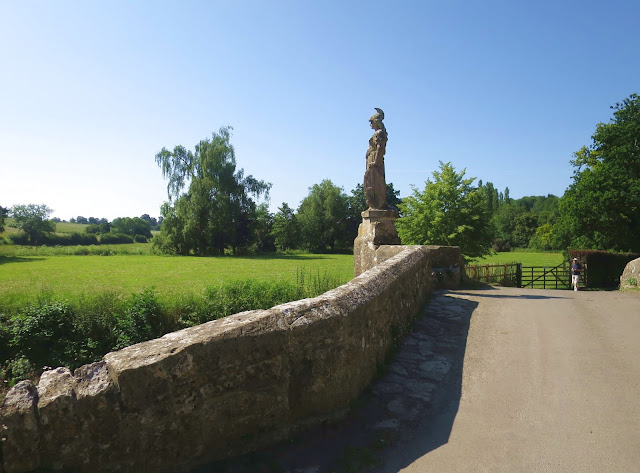 The garden was very well worth a visit and we spent hours there. It's not very large but there are all sorts of curious corners and some beautiful Blooms.  This poppy was deep red and looked as if it was scattered with silver. 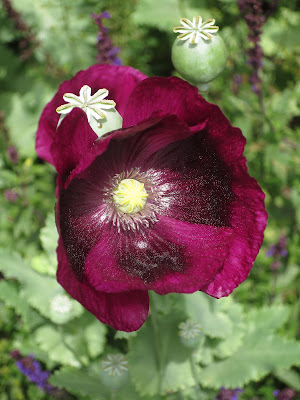 And here are roses climbing up a pillar. 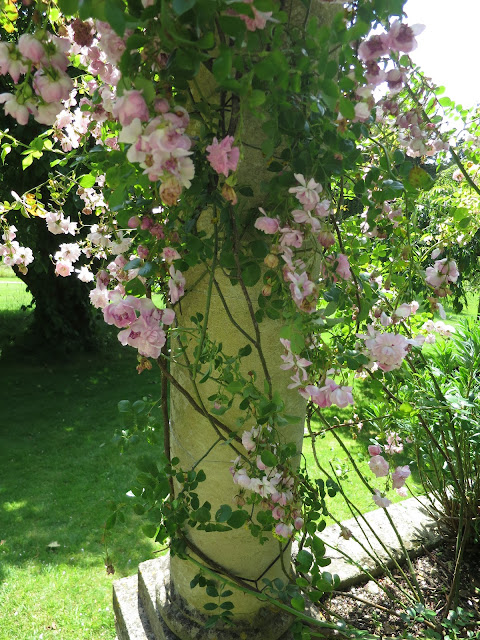 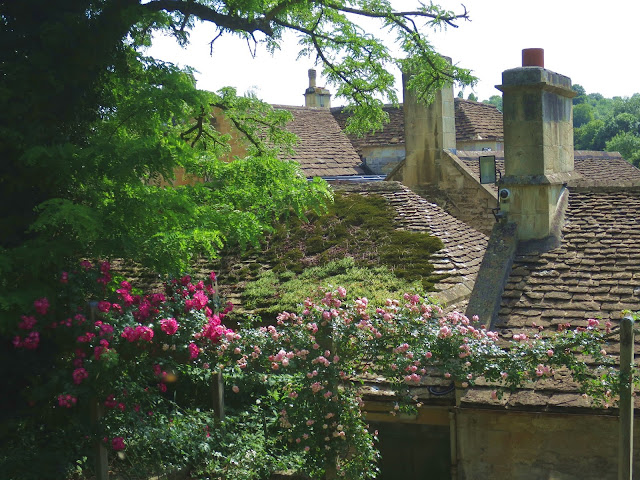 We returned to London by the M4, stopping off at Hungerford, West Berks, and noticing a Boat that seemed to have a bit of a problem... 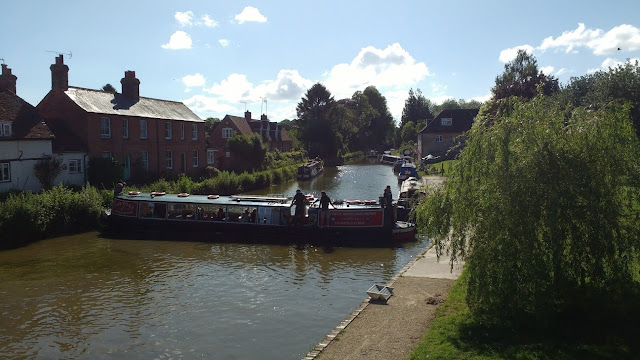 And went for a walk on Hungerford Marsh, a nature reserve by St. Lawrence's church, listening to the Bells.  The ringers were practising the changes, and went on for about an hour. It sounded very nice but they must have been exhausted at the end of it, not to mention a bit deaf.  But to me it felt like an archetypal English country afternoon.