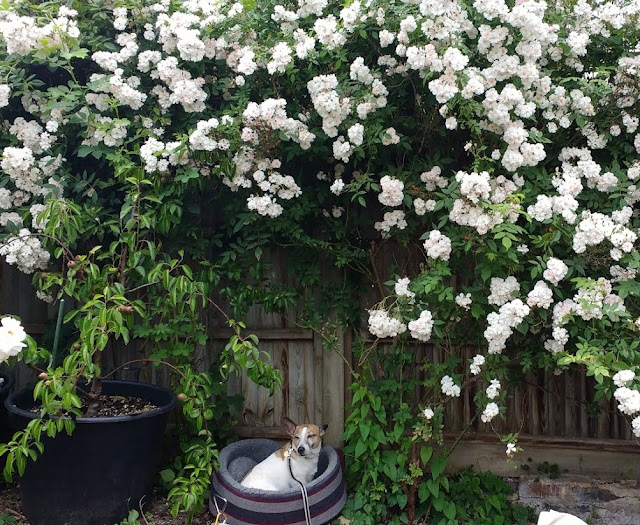 I'm identifying with this dog, sitting there and thinking, wow... I used to like writing my blog almost every day, now weeks seem to go by!  Is my life really getting that uneventful?  Oh, and it's raining....

The weather has been pretty bad so I've mainly been sitting indoors writing the Durrell stuff, babysitting, and that kind of thing. So it was great to go out the other day with T's cousin and her husband, who live in Bromley, a suburb in Southeast London, to visit a most fascinating house near where they live. It is the family home of the illustrator Charles Keeping. and his artist wife Renate. Both of them are now dead, but once you have seen their work it is hard to forget it

Their daughter Vicky lives in the house, with her brothers and their children nearby - they were a very close family. She is a trained artist too, so the interior is full of quirky and interesting objects - many of them small art works, family photos or strange souvenirs from travels in faraway places.  I took photos but it was difficult to convey the atmosphere, which was bright and spacious, colourful, welcoming, arty and rather glitzy too, with sparkly cushions and golden braid here and there.  And what a nice lady Vicky was - she even gave us tea and chocolate biscuits! 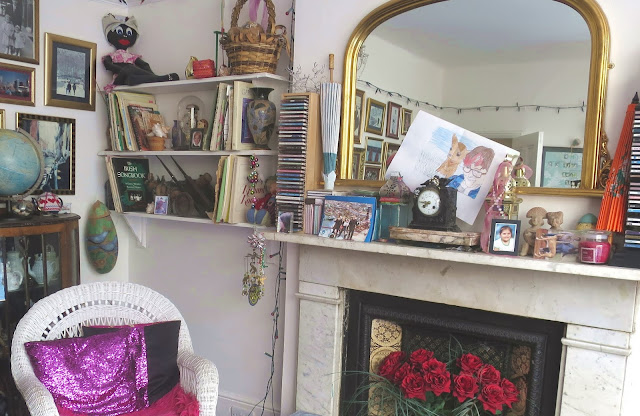 Charles was a printmaker, a master of black-and-white. And, although he was by all accounts a very happy and well loved family man, he also did some very sinister, ghostly pieces. As his daughter said when we were at the house, he must have bottled up all his bad feelings to release them in his work!

He was also one of the best horse painters I have ever encountered.  Here is one of the unpublished lithographs in the hallway. He came from a poor background, and as a small child had been fascinated by the huge dray horses stabled next door. His biggest treat was to be picked up and put on one of the horses. He never forgot the feel and the smell of them.  and remained obsessed by working horses all his life.  This large print shows one of the stables that used to exist in London, where the horses had to go to their first and second floor quarters up a ramp.   He captures so well the atmosphere of the London he grew up in, (and which I also partly remember), with its soot stained brick and faded advertisements painted on the walls. 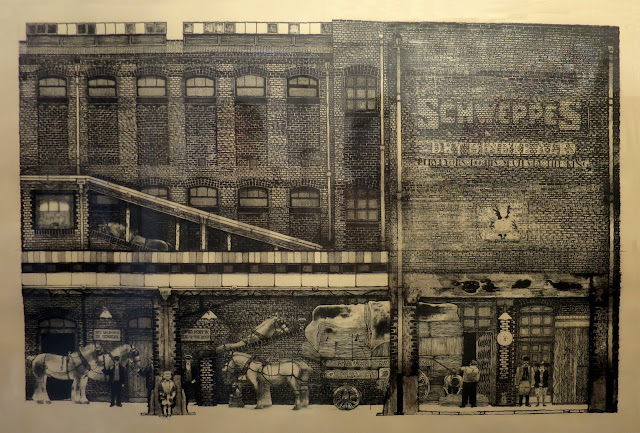 His wife came from a posh German Jewish background, and her art work is mainly stitched or else delicate watercolours. She did several major projects, including one on temptation: these cakes are all created from fabric. 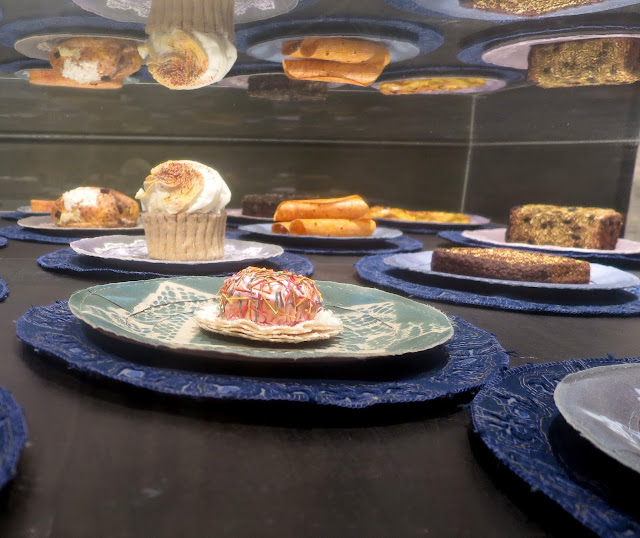 Her piece de resistance is an entire room of incidents in her life, created in needlework, and based on styles of newspaper ephemera.  I found it almost more interesting than Charles' work, really. Although she did not have the same commercial success as he did, she was a true artist.  She has now passed away but there are some films of her here on the website if you are interested.

And on Saturday we went out for a rainy walk on Hampstead Heath; it was very peaceful and beautiful.  Here is a little video.  The quiet music in the background came from what I think was a homeless man sitting on a bench not far away, with his dog. I thought it was wonderful.

On another rainy day we cycled into London thinking the rain would stop later  (it didn't). We saw an exhibition in always-interesting Wellcome Collection, called "Smoke and Mirrors."  It is about the science behind magic. I always think people who put on exhibitions about magic have a bit of a problem since they're not supposed to give any secrets away, but here they managed very well by having psychologists explaining about misdirection, about building the audience's assumptions, and directing them to think in certain ways. (Which is a subject more than relevant in these political times, I think!)   Some tricks rely on physiological characteristics of the human brain - for instance, that there is usually a 1/10th of a second lag while our brains process what our eyes report.

I must confess I was a sucker for most of the tricks they talked about, some of which were so obvious that I can't believe I didn't spot them.  There were numerous little films by real magicians doing versions of these tricks.   I once spent a few months doing articles about top professional magicians, and ended up having great respect for their skill.  But there is no doubt about it, they were all rather unusual people, many of them quite obsessed with their wish to baffle and amaze, and willing to practice many hours a day to perfect extremely difficult routines.
I definitely fell for this charming man pictured below, an early 20th Century magician called William Marriott, who wrote a piece for "Pearson's Magazine" debunking the type of frauds used by spiritualist mediums. Here he is posing with some of his little fraudulent friends. 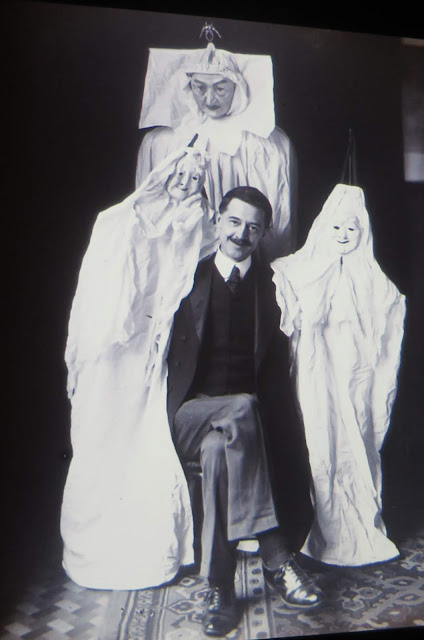 and here he is with some not-so-disembodied hands!  The photo on the left shows how it would have appeared in the seance. 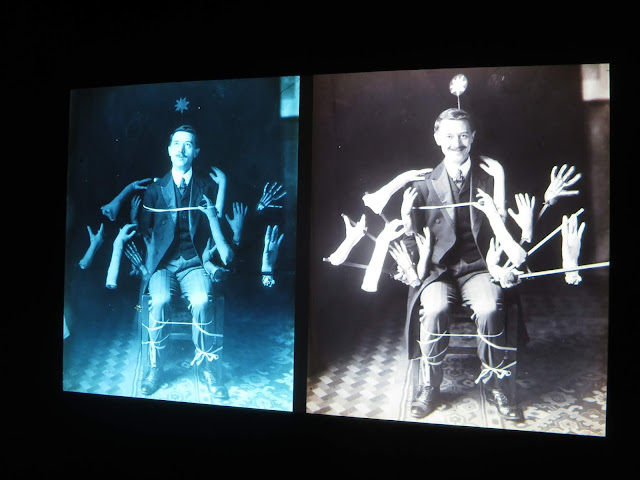 So, even in the rain it is possible to have fun, but I do hope we get some weeks of summer soon!
Posted by Jenny Woolf at 22:04