The Tale of a Garden

This is a view of London from the East, with Canary Wharf to the left and the Shard just hidden by that tree to the right. (it was a bit of a hazy day, but take my word for it, this is what you are seeing below).   I was viewing this London skyline the other day from a fascinating place about twenty miles to the North-East of London. 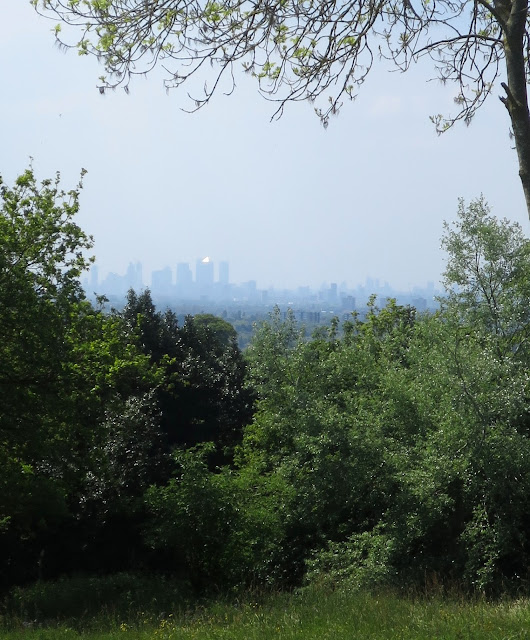 It is a rather pretty little village named Great Warley, and here is its "Big House" - Warley Place - in about 1900.  Dating from the reign of Queen Anne, it belonged to a rich lawyer called Frederick Willmott, who moved in with his wife and two daughters, Ellen and Rose, in 1875. 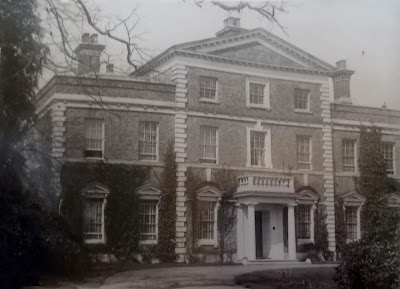 By 1900 Ellen was in charge of the house. Her parents had died, her sister had married and gone to live in Worcestershire.   Ellen had a pretty comfortable life...this is the little pony-trap in which she bowled around the neighbouring lanes. 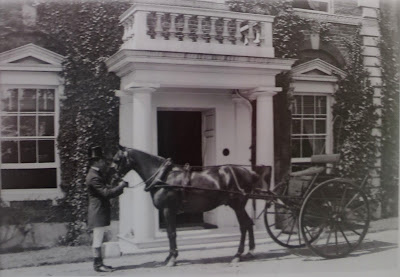 I don't know if she was lonely in the big house, seen below from the back, but it had a most beautiful garden. In fact, under Ellen's care, Warley Place came to possess one of the most famous gardens in the country. 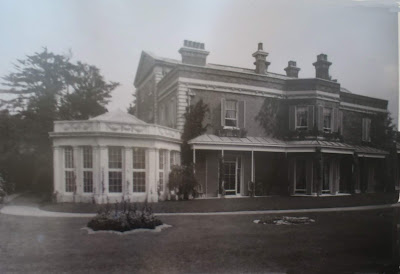 Her sister and mother had both been keen gardeners, but it was Ellen who reputedly cultivated over 100,000 species of plants. Warley Place Garden featured many amazing and unusual trees, an Alpine hut, a flower meadow, herbaceous borders, an extensive rockery, scenic walks, a rose garden, a vinery and even an "alpine gorge" with gigantic boulders brought down from Yorkshire, with a filmy-fern cave included.  Ellen was so knowledgeable that many varieties were named after her, and financed   plant hunting expeditions in order to get the rarest and most exotic seeds and cuttings. 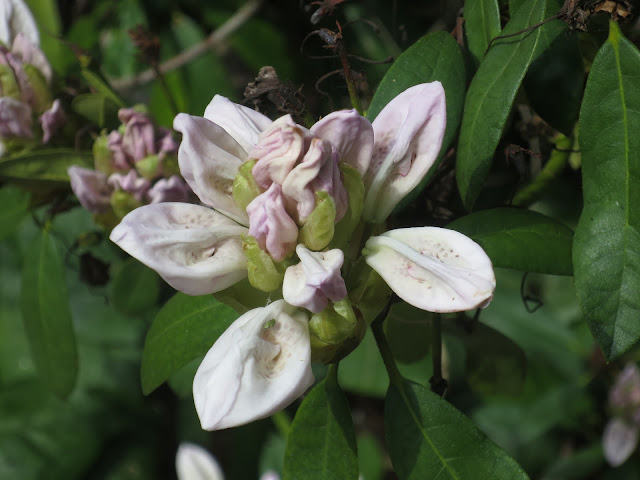 But today, this (below) is the only recognisable part of Warley Place that remains. It is the conservatory, which you see in the  third 1900 photo, rescued from collapse and stabilised into a picturesque ruin a few years ago. 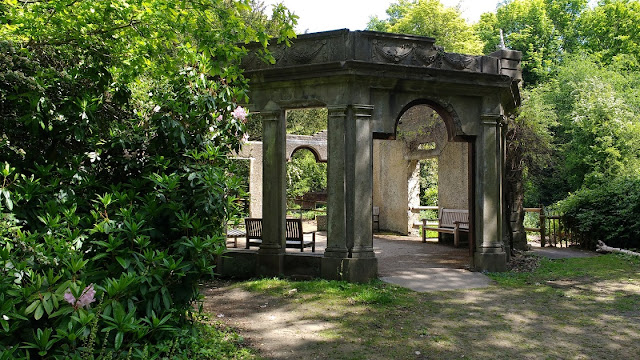 The problem is that Ellen,  although a most wonderful gardener, had a somewhat strange personality. She seems to have been quarrelsome by nature, uninterested in other people and she had also been greatly indulged as a child and young woman. She had absolutely no idea of the value of money, did not know how to earn a living, and simply spent her enormous inheritance as if there was no tomorrow - including on the purchase of two other large houses and gardens abroad.  Eventually there was no money left.  As everything began to crumble about her, the old lady sat in the conservatory where it was warm, writing her letters and reading books.

When she died in 1934, the house was put up for sale. By then, few people could afford the staff to run an old mansion which did not even have electricity.  As for the garden - and the troops of uniformed gardeners who had kept everything immaculate - that was even less affordable.

So the house was sold to a developer, who planned one of the type of suburban housing estates that you see in this quaint old film.   Not bad houses, but highly monotonous when they stretch for miles and miles, as they do not too far from Warley.  At any rate, the local council refused to allow the estate to be built, and so Warley Place fell further into decay.  When the war arrived in 1939, that was the end of all notions of housebuilding, and Warley Place was haphazardly knocked down, or fell down, and the site was abandoned.

By that point, Ellen's sister had managed to rescue many of the rarest specimens; many other plants were sold and the site was cleared of anything considered valuable. But the skeletons of many of the horticultural buildings remained, the cisterns to water the plants, tiled floors, the ruins of the heating system for the hothouses,  the remains of the hothouses themselves.  Below is part of the remains of a large group of ornamental hothouses designed so that visitors could walk around and enjoy the plants. 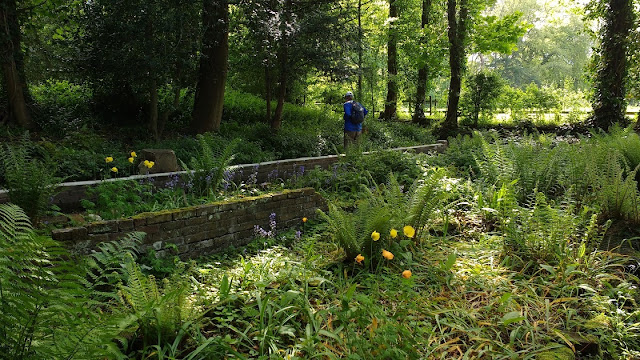 Sad as this is, though, the 25-odd acres of Warley Place now form one of the most interesting and beautiful nature reserves I've ever visited.   Very few of Ellen's celebrated rarities remain, but volunteers from the Essex Wildlife Trust, which leases the garden, have put in countless hours of work to encourage the marvellous wild plants which colonise great areas of the estate. The volunteers have certainly not forgotten the past, but they choose instead to focus on how nature has taken it over to create a different kind of beauty.

Here is the beautifully hand-pebbled rainwater channel, now forming an enchanted path through woods of flowering shrubs, trees and ferns. 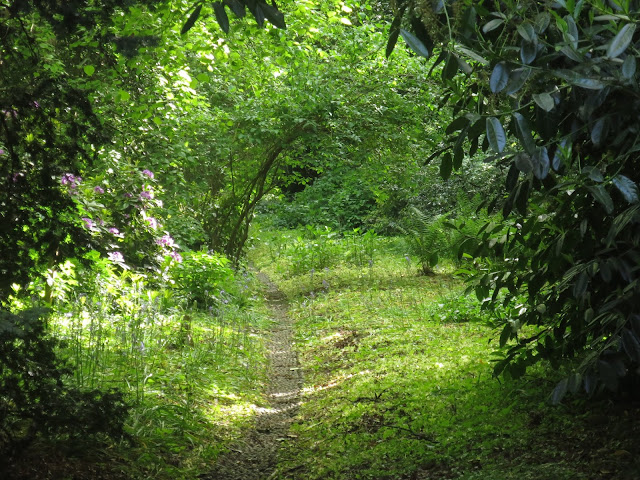 Many of the rhododendrons Ellen Willmott cultivated survive, co-existing with the wild varieties. 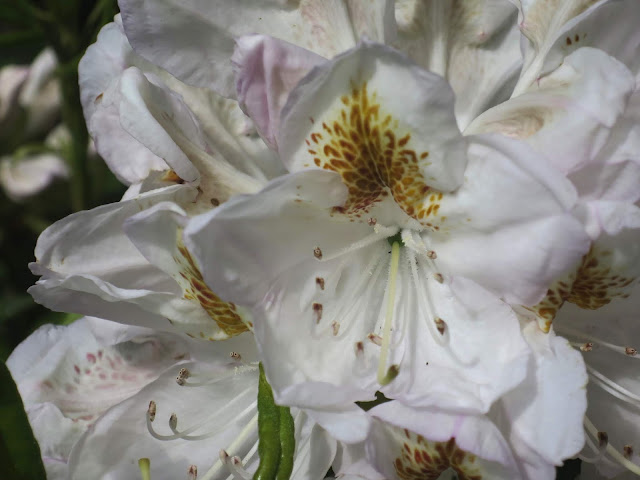 Below is the scene inside the old, walled kitchen garden, in which all the vegetables for the mansion would have been grown.  The different sections of the gardens were marked by low box hedges, which have been restored, as have the high walls which surrounded the entire kitchen-garden.   Ellen was unusual in that she planted various exotic trees in the kitchen garden, including palms and magnolias, some of which survive. 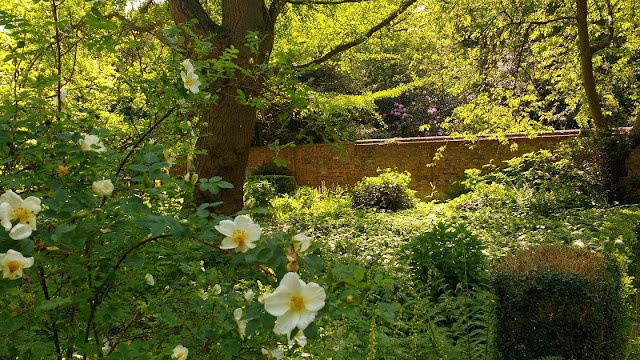 Here's a row of old Spanish chestnuts on a bed of moss. I saw moss gardens in Japan, but have rarely seen a moss lawn in Britain.  The oldest tree, second on the left, dates back four hundred years, and may have existed when the diarist John Evelyn owned the land. 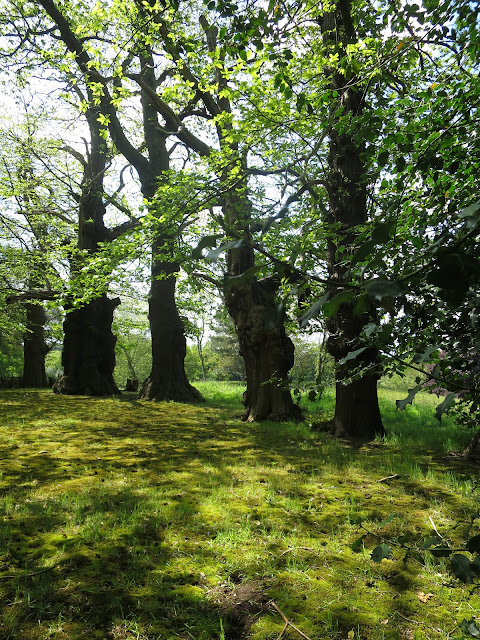 Below is what was a rockery on a grand scale.  Now it is colonised by poppies and an ocean of forget me nots.  There are literally acres, too, of ramsons, the greenish-white wild garlic you can see in the foreground.   I've eaten ramsons cooked and served as a vegetable in Germany, but Brits don't seem to have noticed that this wild plant is edible, despite the fact it makes the entire wood smell of garlic.  Although it is not a showy plant, it is quite something to see tens of thousands of them.... 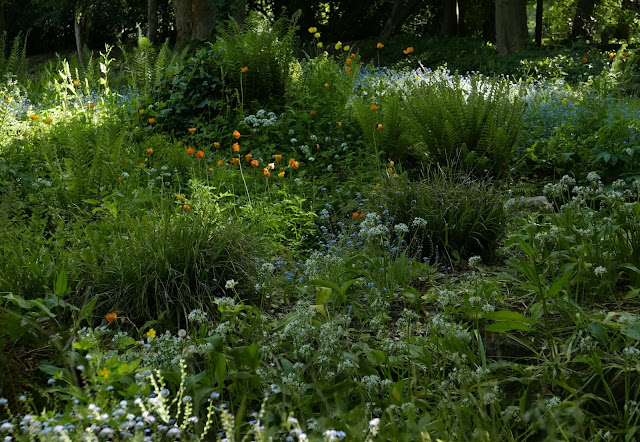 .... as you do on the boating lake which Ellen had built on a specially constructed hill, supported by steel girders overlooking a neighbouring lane.  Here, she used to take a favourite nephew boating; the lake boasted a bog garden right next to it, and steps down to the water that had been created from old milestones. 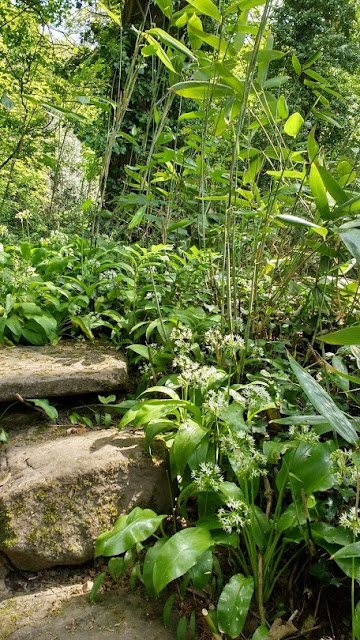 The bog garden and boating lake are now dry and are carpeted in ramsons and bamboo, a remarkable sight. I found it impossible to photograph them, because I just couldn't give an idea of the scale.

Warley Place is famed for its magnificent wild daffodil displays in early Spring,  and then for its bluebells.  It's past the bluebell season now, but many clumps of bluebells are still lingering, and make a fine show with red campion, alkanet and many, many other varieties of wild flower. 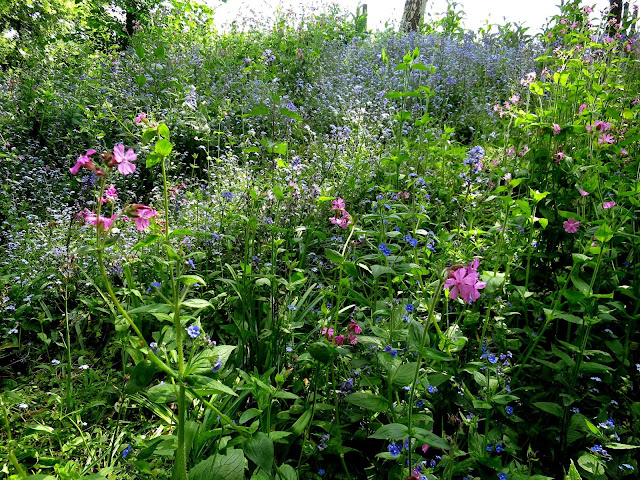 And when you leave, you take the narrow gravel lane which leads through a five barred gate to a sward of buttercup meadow, a most peaceful place. 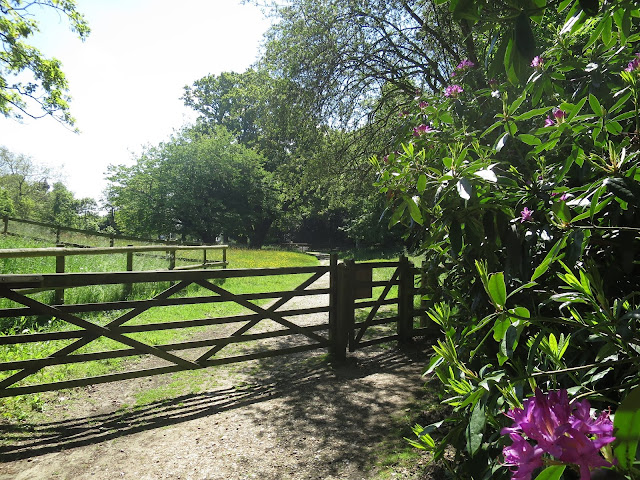 It is a most wonderful nature reserve, but it would also have been a wonderful garden, and very few records of it exist.  So I couldn't help being exasperated by Ellen Willmott's improvidence and selfishness in not seeking to secure it for posterity.

But then, I think, if the house had survived, it would probably have been in private hands, hidden behind electric gates and with the gardens re-landscaped by some company offering all the latest fashionable and conventional plants.  Or perhaps it would have been a corporate headquarters with lots of parking and easy-care shrubs stretching as far as the eye could see. Or maybe it would have been in the council's hands, leased to an NHS chiropody clinic, with the gardens abandoned as a dark and impenetrable jungle.

So on the whole I'm glad that it is here, free and open to all, cherished by its Essex Wildlife Trust volunteers, a haven for all kinds of plants, animals, bees and butterflies. We loved wandering around it and look forward to returning in different seasons of the year to see what Nature has to show us.

The Wildlife Trusts are wonderful  - click the link here for more details of Warley and other natural places to visit in Essex.