On impulse we decided to visit Sir John Soane's house, in Lincoln's Inn, the legal quarter of London. Here's a link to the website but be warned it doesn't give you the slightest idea of what this place is like!  Nor do they allow photos (and they're really strict about it).  In fact, that might be just as well, because if ever a house needed to be experienced in real life, this is it.

Soane was a famous 18th century architect, and the house contains his collection of artistic and antique items. He designed it himself, and lived there with his wife, so although many of the rooms are most unusual, several (though by no means all) are also comfortable to live in.

Soane's most famous building was the Bank of England - but not the present one. In fact, there aren't many buildings left that were designed by him at all. But you can get an idea of the peculiar ideas people had about architecture in his day by looking at this picture, which shows his design for the Bank of England ... as a ruin. It was done by painter Joseph Gandy, and I think was probably meant to suggest Soane's designs were like that of Ancient Rome. 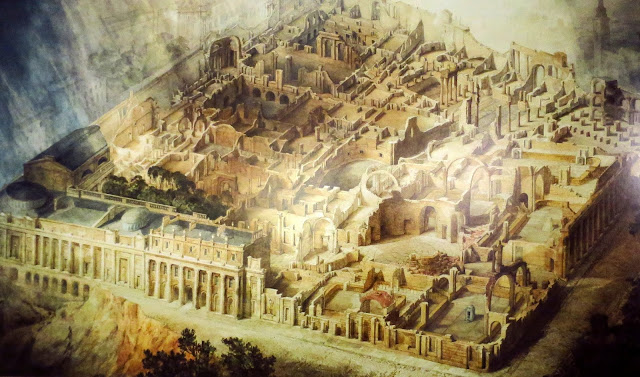 I didn't see anything about the Bank of England in Soane's house, and the theme of the house is really his collections of historical and architectural items. There are about 40,000 objects, none arranged chronologically, and hardly any labelled, and the volunteers running the house wisely keep it that way. The layout is strikingly original.  Soane aimed to play with light and devised many ways to make the rooms in the house relate to each other, aiming to use natural light creatively. Vaulted or domed ceilings let in light, daylight filters in from variously shaped skylights and windows, not to mention the occasional sculptural hole in the floor (railed off).  There are innumerable archways and doorways leading into a maze of small corridors, mostly open down one side.  I found a photo  of a curious little room, not more than four feet wide, about 12 feet tall and about 16 feet long, at a guess. Perhaps Mrs. Soane sat there to do her sewing.  Or perhaps she didn't - perhaps it has no purpose at all.  It has a striking stained glass window and pieces of white sculpture on shelves. 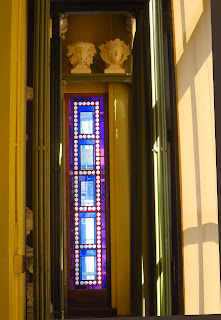 For me the house's most memorable object is a gigantic (genuine) Egyptian sarcophagus, and when it arrived, Soane was said to have held a celebration party which lasted three days. But many people will have a different favourite object among the architectural models, busts, fragments, ancient stained glass, furniture that he designed himself or the many paintings and drawings which he also collected.

The strangest room might be a picture gallery where you can get within inches of the oil paintings, largely Hogarth but with Canalettos, Watteaus and many others too. And just as you have looked at these,  you will find the gallery can be literally opened up to reveal a whole new batch of oil paintings on the walls - one of the attendants opens it up every hour or so.

Or perhaps the strangest room, on second thoughts, is a Hermit's Grotto, in the basement, with table and comfortable chairs and an astonishing but tiny decorative plaster ceiling, naturally lit with magnificent stained glass.  If you want to know more, the best thing is to visit if you can, but if not, then my friend Jeanie Croope visited the house on her trip to London last year and did a lovely post, here, She even managed to find some photos.


Other than this, I've been working hard on Durrell, so very little to report, except that we've had the twins over, and I have been going out into the communal garden whenever it is sunny, which hasn't been that often.  May is such a beautiful month that I like it whatever the weather - though better in the sunshine. 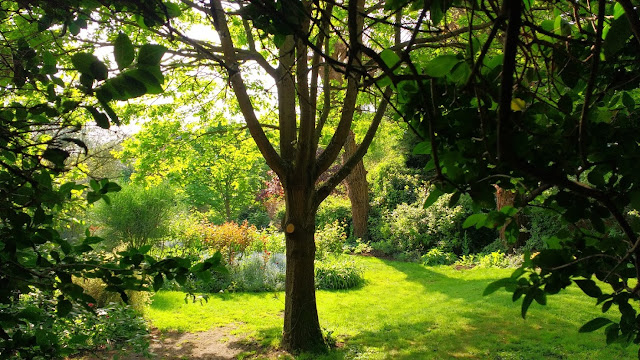 Below is a shot in what used to be the Victorian gardeners' compound at the edge of the garden, with one of the neighbours starting to rebuild a very peculiar wall indeed. I have
been wondering about that wall for a while. 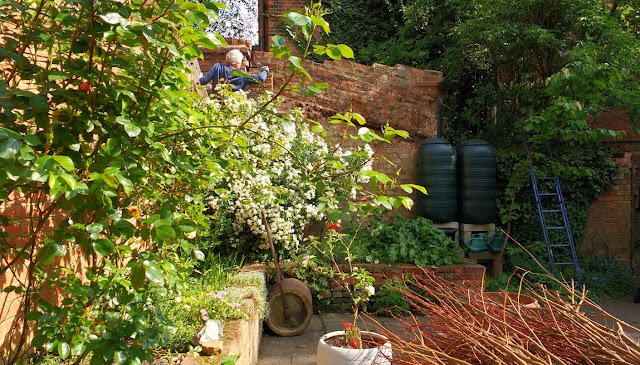 I haven't been reading the papers, so the royal birth almost passed me by, but I did like this informal picture when I saw it. It shows the Royal Family in laid back mode, looking very much like real people, and citizens of the world as well as of Britain.  I know a lot of people object to the Royals, but I am one of those who thinks they generally do a pretty good job.  Although their lives might seem wealthy and glamorous, I wouldn't like to be trapped in a very public social role from my earliest infancy.  Maybe that's just me, I don't know.

And I've broken my favourite pair of glasses, and am thinking of getting another one. I am not sure this pair will fit the bill, but there's something about them that I like. 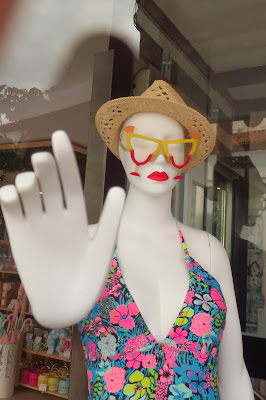