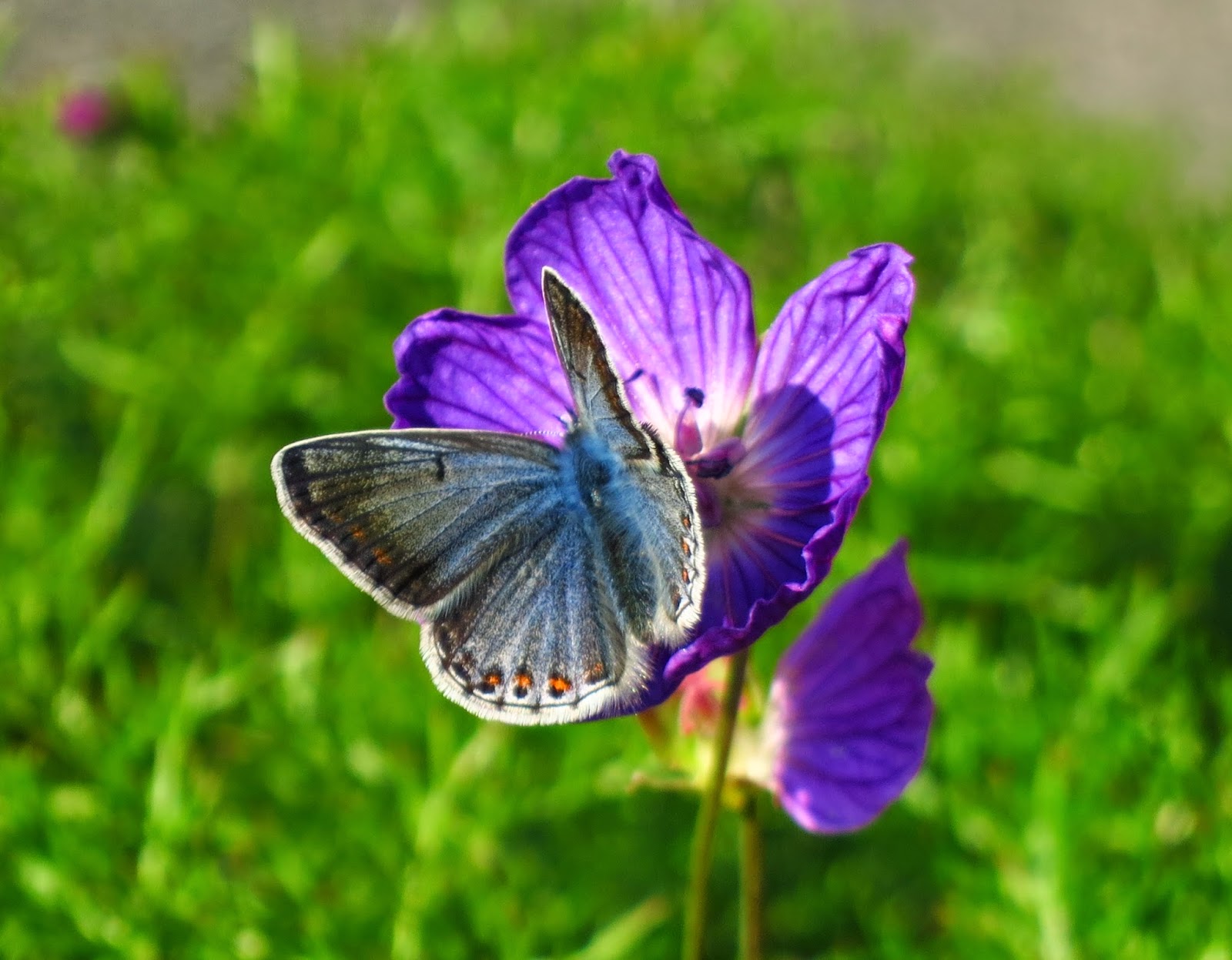 Haven't been much in London at all. We were visiting friends in Wessex last week (where I spotted this pretty blue butterfly, above) and we somehow got chatting about ghosts and the supernatural. I was very surprised at how many perfectly normal people reported ghosts and hauntings from their own experience.  We all agreed that the the "ghostly" manifestations seemed a bit inconsequential and really quite varied, although rather scary at the time.

My feeling about ghosts etc. is that I don't believe in them,  even though I once worked for the vicar of this church (photographed 100 years ago or so - these days you can hardly see it for trees) 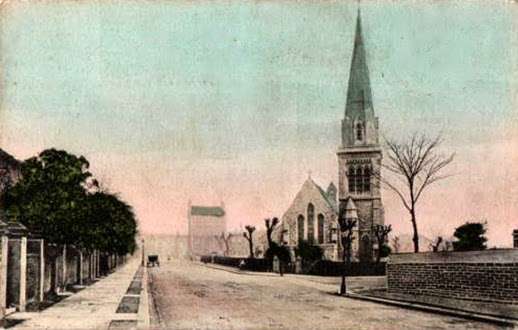 By the time I was there, they'd built a church hall where my daughter went to playschool every weekday morning.  We were hard-up at the time, I needed work and I was pleased to be getting a handy part time job in the vicarage right next door to playschool. But the vicar turned out to be a well known exorcist and my work was mainly dealing with deeply troubled people who thought they were possessed.    My experiences there were enough to convince me that I did not wish to meddle in this subject and I was not sorry that my daughter grew out of that playschool soon after and I didn't need to work there any more.

I have no doubt that many of us (including me) have scary and unexplained experiences, but I prefer to keep an open mind about what these experiences actually mean.  It's so easy to sleep and dream very briefly, misinterpret sounds or sights, or become quite suggestible. Also, there are strange folk around who like to threaten and frighten others and are not above taking a lot of trouble to do it.

And chatting with my Wessex friends,  I learned that a vicar I had met a few weeks ago has to keep clearing up "cursed" hub caps and unreeled VHS tape draped over hedges outside his vicarage - it's a form of attack by weird individuals who are into witchcraft, and worse.  At first it seemed ridiculous to think of some idiot cursing VHS tapes, of all things, and then spreading them around.  But I quickly realised that it is deeply threatening and upsetting to be on the receiving end of this weirdness.  I ended up feeling  sorry for this vicar, and surprised that apparently other vicars have to deal with similar deranged behaviour that is more appropriate to 1614 than 2014.

I'll leave the topic here, as I know it upsets some people - but it's on my mind so hope you don't mind me sharing.  When I got back to London, I went to see the choir of Kings College Cambridge singing sacred music at King's Place - what a contrast to the cursers!  The programme included the extraordinary "Spem in Alium" motet by Thomas Tallis.   This work has forty separate parts, so is very hard to sing and conduct.  When Queen Elizabeth I heard it, she's said to have given 40 pounds to Tallis - enough to buy him a country estate in those days.   When forty people are singing it just in front of you, it's so loud and intense that the air seem to jump about and the music completely fills your mind.  This YouTube video can't replicate that experience but it's a good performance.

And now I'd better finish the post I was writing before I went to Wessex.  My post was about Essex. Essex and Wessex are on opposite sides of the country ("Essex" = East Saxons, "Wessex" - West Saxons, I'm told),  In many parts of the East of England, you'll see houses decorated with pargetting, a form of plasterwork. It can be in a plain little pattern 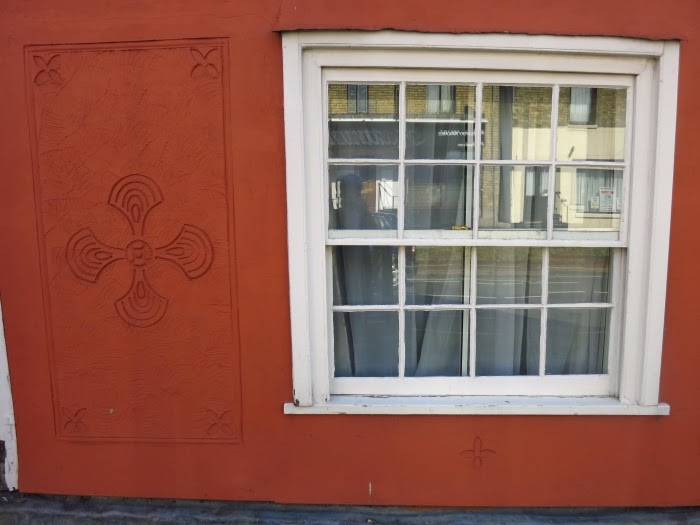 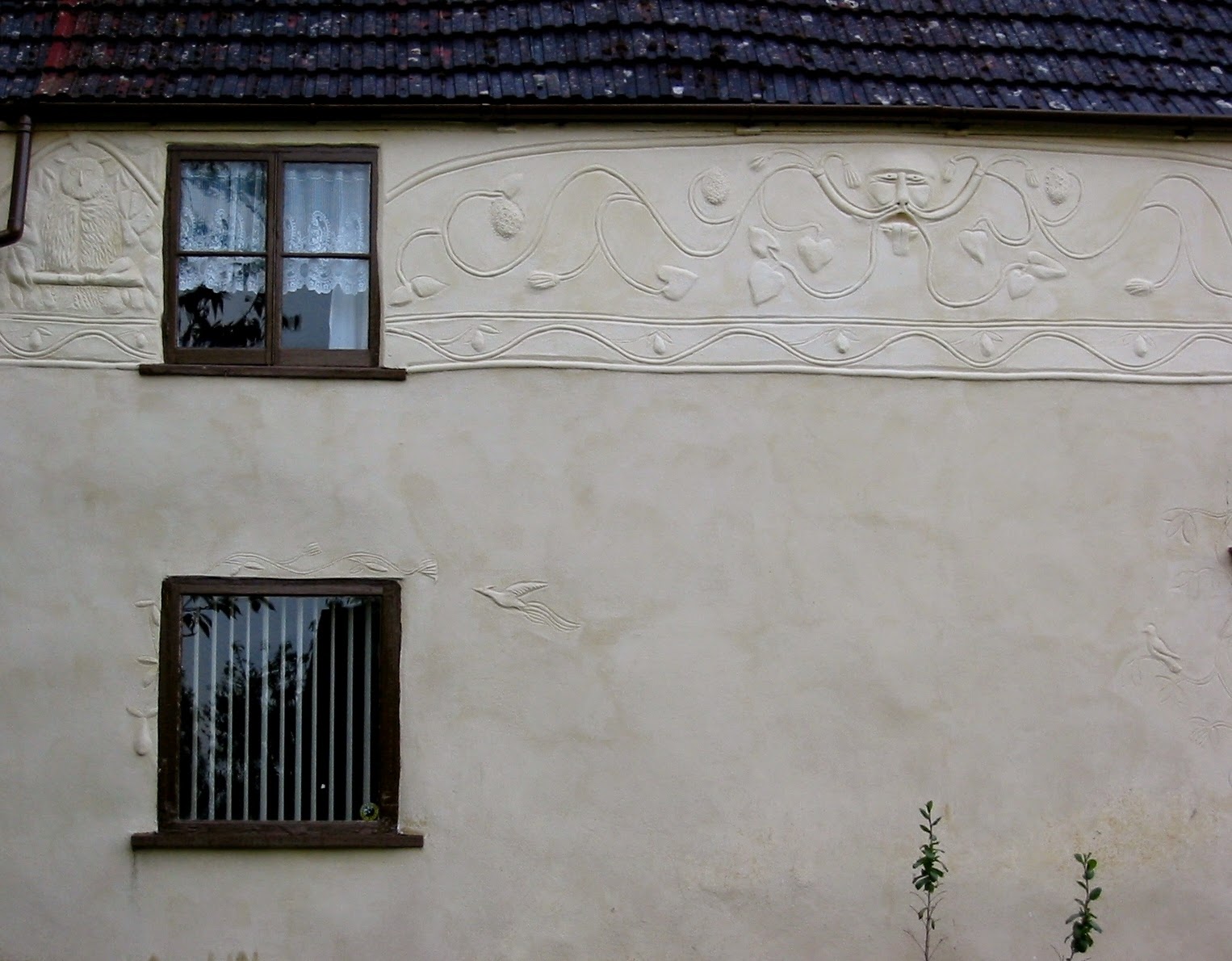 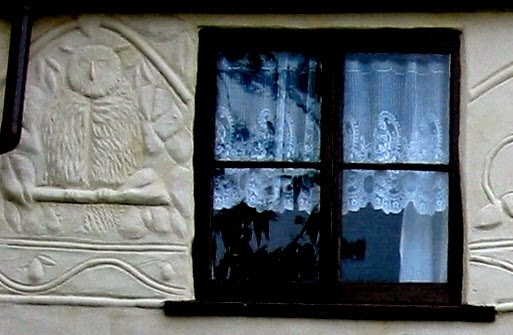 or quite descriptive. The one below, in Saffron Walden (see last post) seems to be telling a story, but I don't know what it can be! 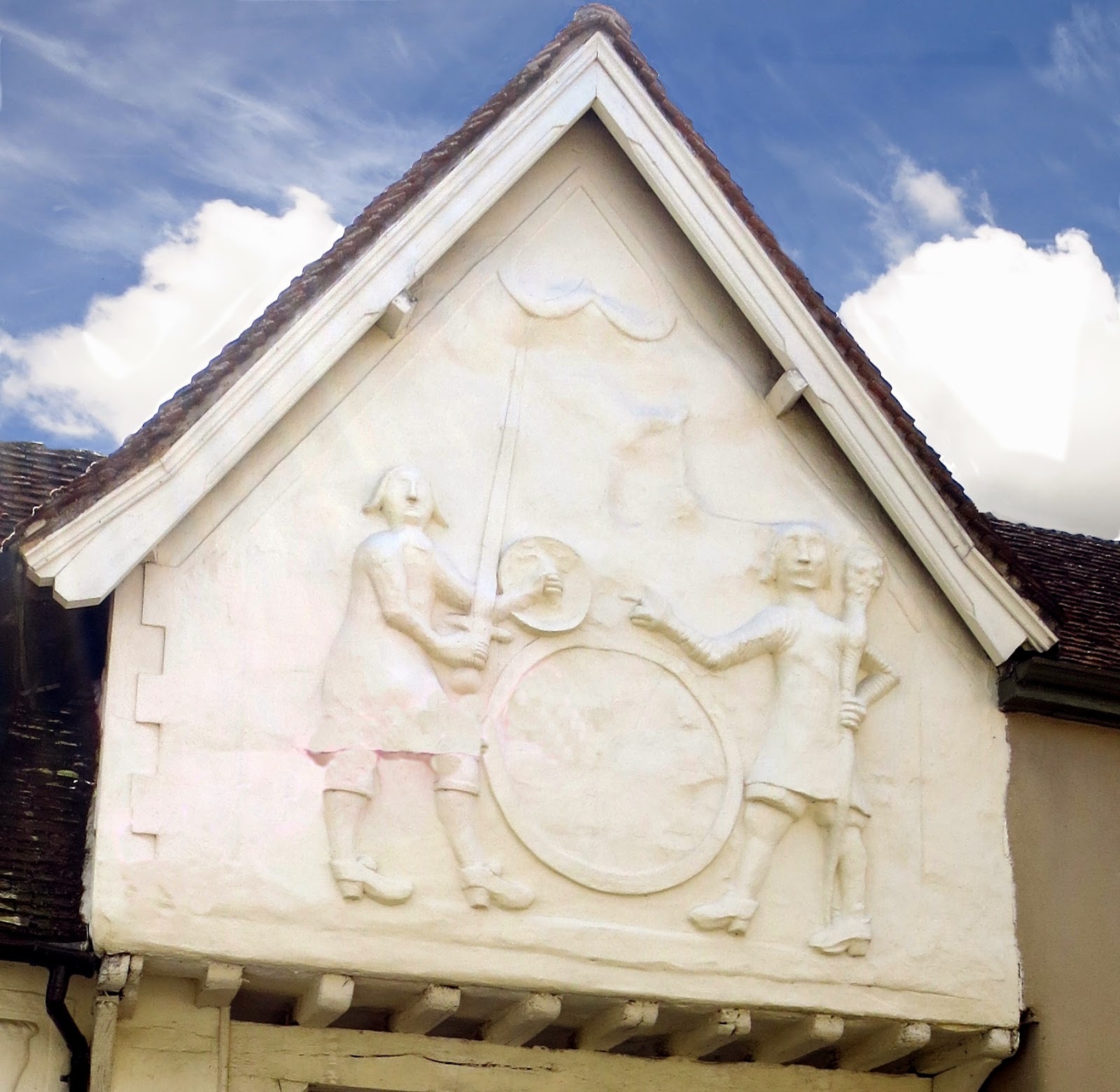 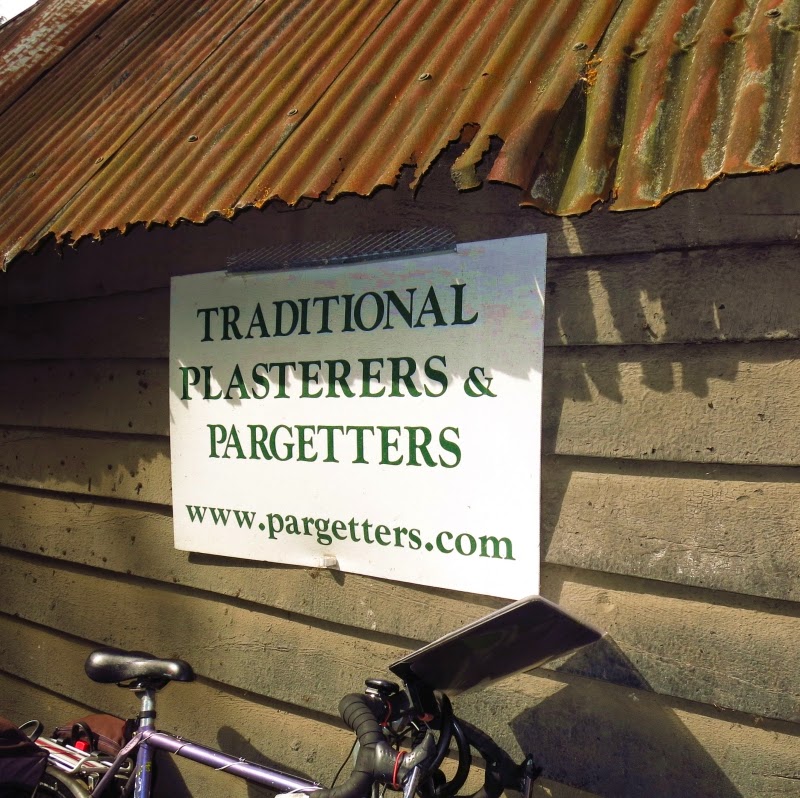 Adjoining this old shed was a handsome house, decorated with some interesting modern pargetting describing medieval customs. I thought it was great. 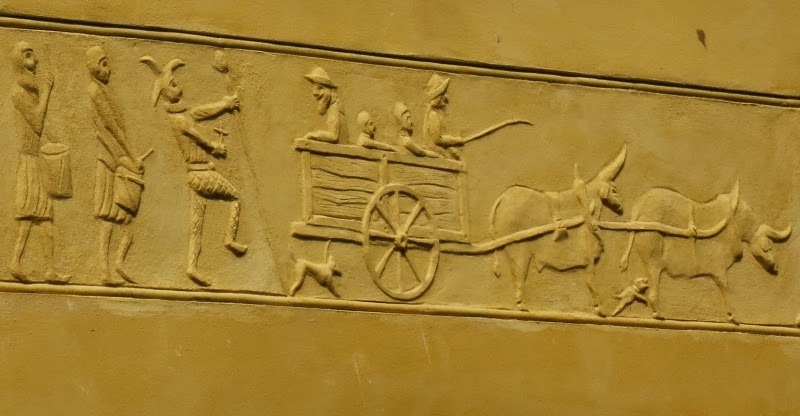 We have also seen pargetted homes in Northern France, but there the pargetting is often painted up in bright colours. 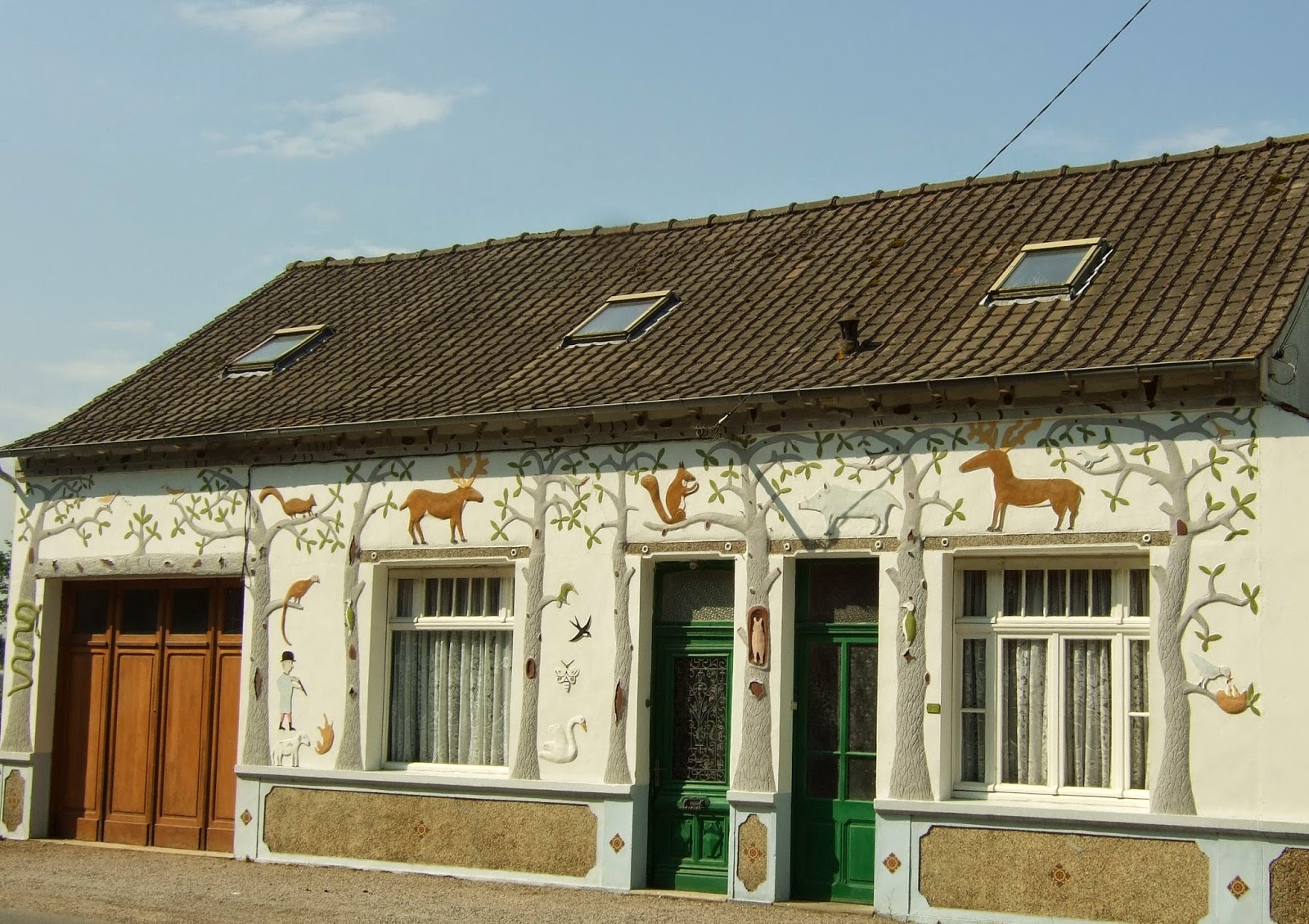 I suppose the scenes in old pargetting are also to do with legends, supernatural things, traditions and spells, lingering on in our modern world.